for strong violence and bloody images, language throughout and brief drug use. 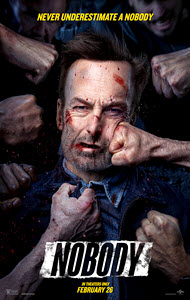 Being a “nobody”—an underestimated and overlooked dad and husband, taking life’s indignities on the chin and never pushing back 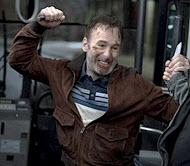 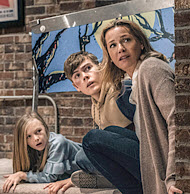 Attempting to save one’s family from a dangerous adversary 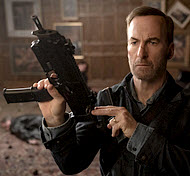 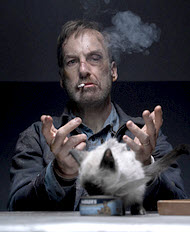 “Never underestimate a nobody”

f you were to ask someone to describe Hutch Mansell, they’d probably say to yeh, “Eh, he’s no one that really stands out in a crowd.” If Hutch walked up during said conversation, he’d probably agree with you too, and frankly, he likes it that way. He has his routine down flat with his wife (Connie Nielsen), son (Gage Munroe) and daughter in their quiet suburban neighborhood: take a jog, exercise, come home, try to take out the garbage, do the dishes, sleep, repeat. Hutch, once a hired hitman known as the “auditor,” has since retired from that job and wants an easy, quiet life.

One night, Hutch is sitting on a bus and looks out the window, realizing that some men, who are clearly drunk, are about to come on board. They begin to harass a young woman on the bus. “Clearly,” Hutch thinks to himself, “I’m not going to sit here and do nothing. I’m going to beat these guys into an oblivion.” So, in defense of this young woman, he brutally beats these young men up, saving the young woman. However, that heroic action comes at a cost.

One of the young men that was beaten up by Hutch is the brother of a Russian drug lord, Yulian Kuznetsov. Yulian demands to know who pummeled his brother. After much research, they find out it was Hutch and, sure enough, go after Hutch’s family. If I could offer Yulian one piece of advice, though, it would be this….

Tell me if this particular premise sounds familiar to anyone and see if it sounds like a movie you might remember from 12 years ago (and I have to thank Lights Camera Jackson for pointing this out for me): A man has been living a quiet life not using a particular set of skills for some time and then a set of events that affects his personal life (like his family) requires him to use those skills again. Anyone? If you guessed the movie “Taken” you’d be correct. How about “John Wick”? Yes, similar premise. “Unknown” (which also starred Liam Nesson from “Taken”)? Again, similar concept.

Now, let’s look at the film, “Nobody.” Hutch starts off as a blue-collar worker who used to work as a hired hitman but no longer does that, or uses those skills, and his past is brought back when his family is put in danger. The plot is exactly the same. It makes me wonder if there was any originality in the planning of the film. Like the main character himself, it doesn’t stand out from the rest of the films that fall in the same genre, indeed, it is a welcome return for Bob Odenkirk.

I’ll tell you one thing that does set this film apart from the others: the violence. It’s gratuitous, horrific and non-stop. For example, there is one scene, a montage of sorts, towards the end, in which three main characters are shoulder to shoulder guns blazing, killing as many bad guys as they can. In the bus scene I mentioned earlier, that violent scene lasts for 5 straight minutes with the young men’s heads being smashed, kicked, stabbed, strangled in the most violent ways imaginable. Think of the most violent video game you can imagine being played out in the flesh. Add to that a jaw-dropping amount of use of the f-word and the Lord’s name in vain and you’ll wish you could have your memory wiped clean.

Violence: Extreme. I can’t possibly list every single violent moment in this film—it’s nearly impossible, and even if I could it would be completely inappropriate to do so. However, let me state there are a substantial amount of fight scenes involving main characters where people are stabbed, kicked, punched, stabbed, shot, suffocated, and beaten. Some scenes that are worth mentioning however include: a boy being punched in the face, a drunk driver ramming their car into a cement block, people being thrown into bus chairs, a man being stabbed in the eye and then having their throat slit, a person is electrocuted, people are seen on fire, a building is seen on fire, and a man has his face shot off at the end of the film.

Sex: A married couple talks about their sex life. A federal agent is blackmailed for sexual activities (this is where we see the sexual pictures). Gang rape of a girl is threatened.

There are no true redeeming themes I could draw from the film.

While cruising in my car yesterday afternoon, I was listening to an interview with the star of “Nobody,” Bob Odenkirk. In his interview he stated (and I’m paraphrasing here), “I wanted to portray a character that related to an experience where he had suffered a break-in with his family present, ” and “I wanted my character to accumulate a lot of carnage.”

Well Mr. Odenkirk certainly succeeded in at least ONE of those areas as the carnage and kill-count is at an all time high in this film. However, realistically I’m not sure most of us would respond in this manner if someone were to break into our homes so I’m concerned this film is not an accurate portrayal and actually sends a DANGEROUS message of taking things into our own hands when someone attacks us, instead of going through the proper channels.

Add to the fact there is a plethora of profanity and vulgarity, and there’s really nothing original about this film, this is a film that NOBODY really needs to see right now. It’s not spiritually redeeming or appropriate for Christian viewers, especially younger viewers. My advice? Pass on this one.