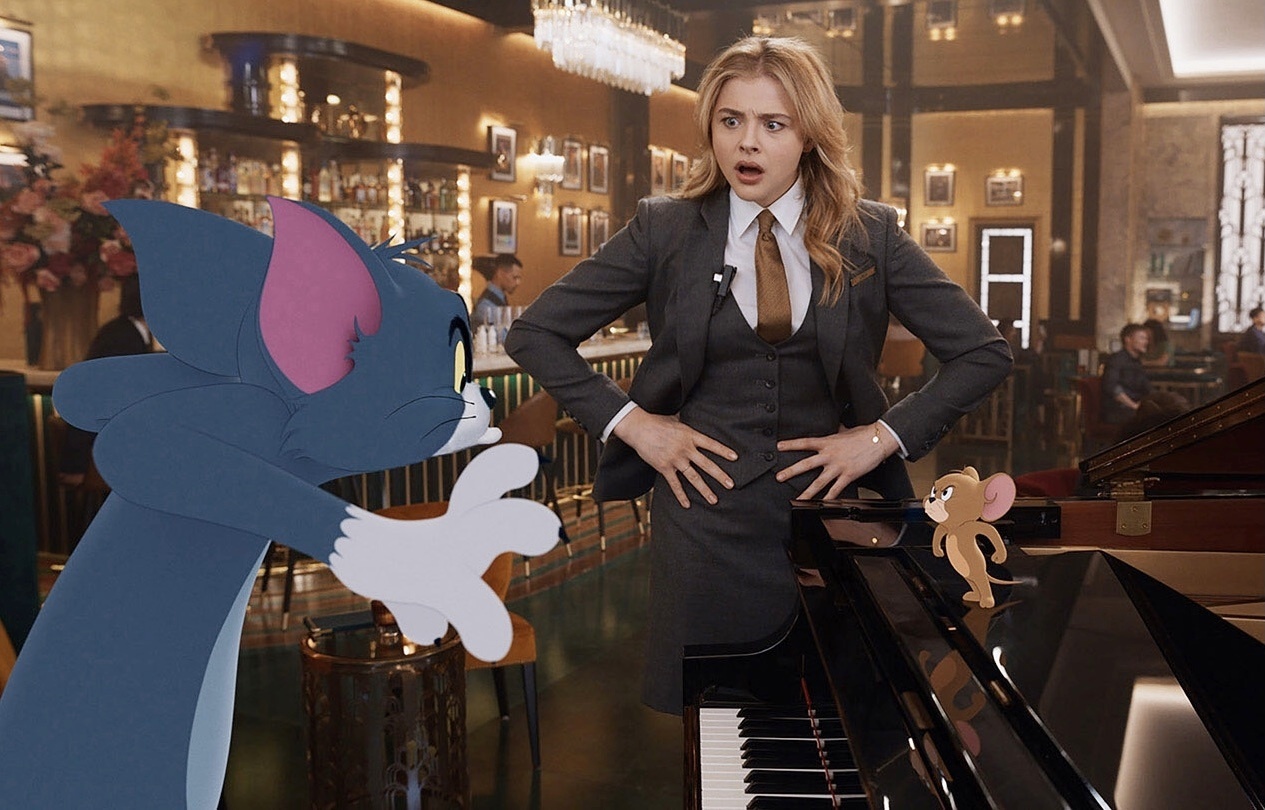 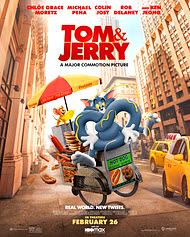 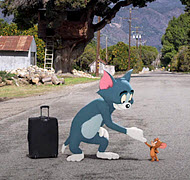 Violence and rude/bad-behavior humor in cartoons

Value of family and friendship

“Best of enemies. Worst of friends.”

Tom and Jerry have had quite a history together. 80 years of it in fact. Now, they find themselves in New York City.

Meanwhile, a struggling worker named Kayla (Chloë Grace Moretz) finds herself fired from her last job thanks to one of Tom and Jerry’s chases. Winding up in the esteemed Royal Gate hotel, Kayla steals someone’s resume and gets a job as a co-event planner at the hotel. Her job? Make sure that a prestigious wedding doesn’t go to the dogs (or mice…). Of course, Jerry finds a home in the hotel’s ventilation system, and Tom is later hired to try and take the mouse out. (And, cue antics…)

I loved the “Tom and Jerry” cartoons when I was a young kid. I remembered watching the “Spotlight Collections” on DVD on car rides to visit family and friends. And I also watched the animated 1993 film (“Tom and Jerry: The Movie”) several times on VHS. And I am always happy to hear of kids who catch the classic cartoons on Boomerang and Cartoon Network even today.

Ultimately, with nostalgia intact, my hopes were perhaps a little TOO high here. Because from a filmmaking perspective, this new movie is a mixed bag.

First, the film has WAY too many modern touches that mostly do not fit with these characters. Tom flosses. Jerry dabs. Pigeons rap. Drones fly. And some of the characters talk with a street-savvy tone that also oversteps its welcome. Of course, this is all included with the hope of entertaining kids. And modern upgrades aren’t always a bad thing. I just thought it was too over-the-top here.

Second, the soundtrack really does not gel either. Occasionally, a couple of background soul and hip-hop tunes are okay choices in the background. But they are used all over the place here and really drown out any sense of an orchestral score (or any instrumental nods to Tom and Jerry’s iconic theme). A brief moment of Tom singing what seemed to be an impression of John Legend also didn’t seem to fit either.

The overall plot is stretched thin and drags on a little long. Now, I am okay with how simple the script and story are (this is Tom and Jerry, NOT Shakespeare. And it is a good thing that it’s not complicated for young kids). But, it does feel like it could have been maybe 15 minutes shorter.

On the positive side, the animation is terrific. I am so happy they kept Tom and Jerry’s classic look instead of giving them a CGI makeover (a’la Smurfs). There’s a “Who Framed Roger Rabbit?” type of zaniness to the proceedings that are pretty infectious. The hand-drawn look melds well with the environment, and the actors’ interactions with the characters are great. The choice to keep Tom and Jerry’s exclamations with the archival recordings of Bill Hanna and Joe Barbera was a smart one as well. Also, the production design and sets are very inviting.

There’s also a solid lead performance here from Chloë Grace Moretz. She nails the savviness of her character, while providing some nice honest moments late in the game. The always hysterical Ken Jeong is also superb and perfectly hammy as Chef Jackie. Colin Jost (Scarlett Johansson’s husband!) and Pallavi Sharda also do nice work here as the prestigious couple, Ben and Preeta, with a surprisingly interesting twist on their relationship in the final act. A couple of side characters work well in recurring doses. On the downside, Michael Peña seems to be phoning it in here. His accent and overall persona here don’t really work, and he doesn’t generate the same enthusiasm he does in the “Ant-Man” films (though there is a scene that seems to wink at his character in that franchise).

I also really appreciated (and enjoyed) the side characters of the cartoons appearing here in several scenes (with the striking exception of Tuffy). Butch (voiced by Bobby Cannavale), Toots, and the alley cats are all given quite a bit to do here (and even Droopy the Dog is given an interesting cameo). Lil Rel Howery does great voice work as Tom’s angel and devil consciences, with a little bit of breaking the fourth wall shown here as well. A few familiar gags from the cartoons make their way in and are welcome additions. Some of the slapstick shenanigans are hilarious, and a few clever pop culture and movie references do hit their mark.

“Tom and Jerry” has a few lessons for kids, including the values of teamwork and a good work ethic. But the one that stood out the most to me was the dangers of lying and deception. Kayla and other characters fib throughout the film, but are later rebuked and corrected for their actions. It is clearly shown that being honest and true to yourself is the best policy. Parents can definitely use this movie to talk with their kids about how dangerous it can be to try to be someone you’re not. In the meantime, Proverbs 19 talks about how important it is to walk with integrity.

There’s also a nod to how social media can often have a negative influence on self-esteem and insecurities.

Overall content concerns for families stays in PG territory. The main issue to note, of course, is the cartoon violence that has been a mainstay of Tom and Jerry since the very beginning. Many times, the main characters smash each other with various heavy and threatening objects, leaving Tom mangled or seriously injured (never bloody or gory, however). Tom is often hit, kicked, smashed, choked, slammed, and electrocuted. He also falls from serious heights repeatedly. They also cause a lot of property damage as well. On a couple of occasions, multiple animals get into a brawl, causing a cartoonish “animal tornado” that causes even more destruction. Cartoon elephants break out of a hotel and crash into cars. Alley cats pressure Tom to eat Jerry in one scene (but he does not).

Other than that, we hear five uses of “oh my g**” and one quick nod to vulgarity with “Wi the Fi not?” (in response to a scooter having Wi-Fi). There’s a brief mention of cartoon peacocks mating. Champagne and other alcoholic beverages are seen in a handful of moments, and a hotel bar is the setting for a couple of scenes. Preeta wears a couple of slightly low-cut outfits. Butch the cat has a couple of bathroom gags. One involves him defecating in the middle of a crosswalk (off-screen), and another has him passing gas at a wedding. Jerry photocopies his rear-end one time, and often carelessly instigates a lot of the mayhem.

As a movie aimed at kids, there’s very little (beyond the expected cartoon violence) in “Tom and Jerry” that will raise the eyebrows of parents. And there’s a few positive messages that could be good conversation starters. However, despite some fun moments, longtime fans of the characters may find themselves a disappointed with the shoehorned modern edge and weird soundtrack choices.

As for me, I’ll admit that I’m glad Tom and Jerry are back in the spotlight. The characters are as cartoony and zany as ever. I only wish their movie was a little better. (Grade: C+)