for action and rude humor. 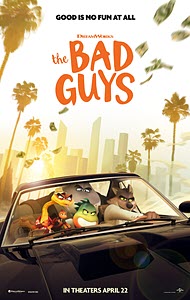 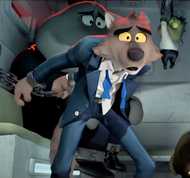 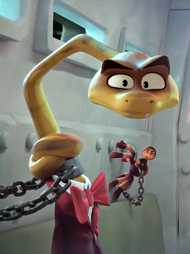 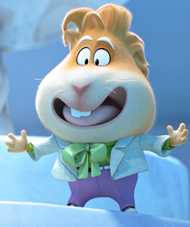 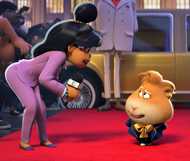 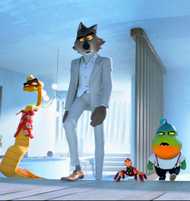 Setting: Los Angeles, California in a world where humans and anthropomorphic animals co-exist 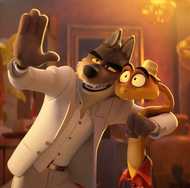 A gang of notorious, criminal animals who are exposed and arrested

Thieves in the Bible: theft, robbery, the two thieves 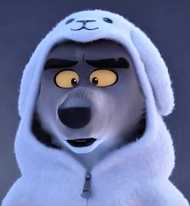 A bad guy wolf who repents and reforms, becoming a crime fighter

Several reformed yet misunderstood criminal animals attempt to become good, with some disastrous results along the way.

Importance of self-control and patience

Putting the needs of others before our own

This film is based on the book The Bad Guys by Aaron Blabey.

What animal scares you the most?

Add a piranha and a wolf, and you have the main characters of Dreamworks’ newest animated feature “The Bad Guys.”

Mr. Wolf (Sam Rockwell—“Moon,” “Three Billboards Outside Ebbing, Missouri”) has always been viewed as a bad guy by those around him. I mean, it’s true. Every storybook villain seems to be a big, bad wolf.

Well, after a lifetime of these presuppositions, Wolf has embraced this villainous reputation along with his team of bad guys—Mr. Snake, Mr. Tarantula, Mr. Shark, and Mr. Piranha. Together, they torment their city with a life of crime. They are outcasts to the world around them, clash with each other, but they remain each others’ only friends. It’s not a perfect life, but they have accepted it.

During their most recent heist, Wolf finds himself in the most unexpected place—helping an elderly woman. She doesn’t view him as a tyrant. She doesn’t see him as scary. She sees him as her hero. Wolf has never been viewed this way, and it makes him feel…well…good. Now, he wonders, could all those assumptions about him and his friends be wrong? Could they, instead, be “good” guys? This leads to a journey of personal realization that results in some crazy twists and turns as they try to achieve something special—Change.

“The Bad Guys” is the feature directorial debut of Pierre Perifel, who had previously worked with franchises like “Kung Fu Panda,” “Curious George,” and “.” He’s made a beautiful film that resembles last year’s “The Mitchells vs. The Machines,” and the critically acclaimed “Spider-Man: Into the Spiderverse.” However, where those films are a constant assault on your senses, “The Bad Guys” takes moments to slow down and let the audience breathe. Its sense of humor will reach kids with its silliness—like a snake wearing fake arms to blend into a crowd, and it will reach adults with its parodies of films like “Ocean’s Eleven” and “Pulp Fiction.”

Even with its silliness, “The Bad Guys” examines some serious topics. At one point, Wolf meets the Mayor, who happens to be a fox. He is a criminal, and she is a successful community leader. Though their lives are polar opposites, she reminds him, “At their core, foxes and wolves aren’t that different.” It reminds us to never judge a book by its cover, and it strongly urges us to consider the needs of others over ourselves as it says in Philippians 2:3-5 NLT:

Don’t be selfish; don’t try to impress others. Be humble, thinking of others as better than yourselves. Don’t look out only for your own interests, but take an interest in others, too.

You must have the same attitude that Christ Jesus had.

This is a family film, and it is quite family-friendly. There is some animated action, crimes, and about a million mind-controlled guinea pigs—many of whom meet their demise. There is a prop that looks like a butt, and it is referenced frequently by the characters. One character has bad gas that impacts the story a couple times, but there is very little objectionable material in this film.

The positives outweigh the negatives, and I think “The Bad Guys” has a very poignant moment. A crowd is praising the main characters that were once considered evil and scary, but one brief instance causes the crowd to lose faith in them again. It shows that they never truly trusted those characters, and I doubt they ever will. It was a very honest moment in an otherwise playful family film.

Who is the only one who can truly change a bad person’s personality to good and righteous? Answer: Jesus Christ

Positive
Positive—Note: Some SPOILERS in this review. I’ve tried to be as nonspecific as I can.

I saw “The Bad Guys” at the cinema today. I didn’t hear all the dialogue so I might have missed some things. But I found it to be a good movie, and better in some ways than some other villain redemption stories. Mr. Wolf eventually returns everything that he and his friends had stolen, stating that he “wants” to do this, and doesn&rsquott seem to hold onto a sense of his bad side still being fun to play around with occasionally (which is a little different to movies like the “Despicable Me” series and “Megamind”). They even willingly went to jail in the end, even after saving the day, and accepted that people might not know the truth about what happened or give them credit for their heroics. There was also a positive reference to being a fan of “redemption arcs.”

The idea of fundraising for poor children, and the tragedy of promised money being deliberately and cruelly stolen right in front of them, was also depicted well, and Mr. Wolf makes sure this is made right.

One character said that after changing from a villainous past, she was still herself, just herself on the right side. This hints at the idea of having two sides within us—an inherently evil, fleshy side, and a Godly side.

One of the main messages, that being good feels good, is very countercultural. Culture and even some Christians say that being bad is more fun and that being good is boring and even sometimes offensive (Isaiah 5:20). But this movie turned that upside down and was very genuine in its positive and gentle portrayal of good and kind behaviour—something that is felt in the heart, and isn’t something we do just because we have to. God created us to do good and He enables us to enjoy it. The movie shows that being bad can feel “good” too, but this is depicted as wrong thinking.

Characters also speak multiple times of putting the needs of others above their own, even in fairly simple circumstances like sharing, and considering the feelings of others—including experiencing something personally that you’ve done to something else. I also loved the way that Mr. Wolf and Diane Foxington gently encouraged others toward goodness, including the way they spoke from their own pasts. The movie also didn’t completely blame society for the way certain characters turned out—it was still a choice on their part what they did. But it also emphasises not judging people according to assumptions about them or things out of their control (in real life, this could apply, for example, to kids with criminal parents) and looking for the potential for good even in those who’ve chosen to be bad. And when a certain character was revealed to have set things up and be a hypocrite, it didn’t change Mr. Wolf’s view on what he’d learnt along the way.

Most of the humour and silliness was also quite good, with innocent visual puns—for example, like the main reviewer mentioned, the snake with fake arms was very funny. There were lots of people in the cinema and I heard a bit of laughing throughout the movie, it seemed from both adults and kids. I also really enjoyed the clever cinematic music. There were some clever and warm-hearted plot twists too.

There was some talk about stereotypes, a concept which is sometimes misused in the case of “wokeism,” but it didn’t seem to carry that meaning here. Rather, one character admitted that he was using a positive stereotype as a cover to get away with certain behaviour, while others used their negative stereotypes as an excuse. So the emphasis was really on choosing between right and wrong, although there was some element of social acceptance or lack of it being a motivation. But the main emphasis seemed to be on choosing what was right for your own sake and because it’s good, even if it meant losing your friends, or not getting approval—and seeking to encourage your friends to do the same and to love them, rather than just accepting their evil behaviour. Characters go out of their way to rescue a friend who seems to be on a bad path. Two characters admit that they love each other.

I heard an offhanded reference to climate change as Ms. Tarantula explained why she voted for someone; this seemed to be mostly a silly moment as her villainous friends were surprised by her saying she voted.

One thing I didn’t like as much was that they didn’t show the pet guinea pigs who were stolen from children eventually getting back to them. They did, however, show them recovering quickly from the mind-control and leaving the situation they’d been forced into. The way they woke up from it had some profoundness to it. The movie didn’t make it clear whether or not all the guinea pigs survived, although I think they would have in a movie like this. One guinea pig appeared to be run over by a car but then was fine, so those who fell off a cliff were probably fine too.

I also was a bit concerned by the amount of times police officers got beat up or knocked about. It was mostly very cartoonish and they seemed to be okay afterwards, but it’s potentially desensitising, both in the case of violence and in respect for police.

One character also allowed another character to be labelled with a criminal past that really belonged to her, but this enabled him to be arrested for other crimes that weren’t known.

The one use of the acronym “OMG” seemed unnecessary and Biblically offensive but was also done in a silly, perhaps slightly satirical way.

I would recommend this movie with consideration to the children and people involved. Some children may be sensitive about the people and animals who get hurt, for example, and may want to be assured that they were probably okay in the end. But overall it is a great story with a powerful countercultural message; and while it doesn&rsquott explain that God is the only one who can truly change you, it does have some parallels to the Bible and might be a good illustration of principals like redemption, loving others, encouraging goodness in others, making wise choices about friendship, and choosing between right and wrong.
My Ratings: Moral rating: Better than Average / Moviemaking quality: 4½
Sonya Simonds, age 20 (Australia)