for violent content and terror, some strong language and a suggestive reference. 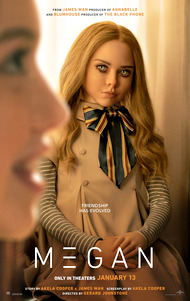 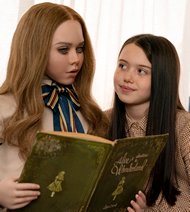 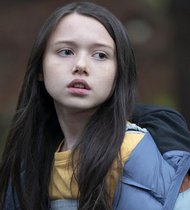 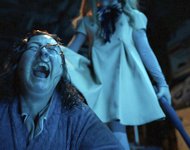 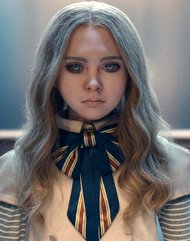 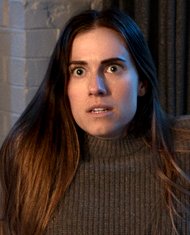 Every child is looking for the next best toy or thing to excite them. Toys have to constantly be evolving with the times to keep up with children and their attention spans and toy companies are definitely aware of this, particularly the toy company Funki. In fact, they created a very odd looking toy creature that you can electronically feed and take care of from your tablet—amongst other features. But that’s not where our story starts.

During a stormy trip in the mountains of Oregon. Katie and her family are trying to make their way through a snow storm for their ski trip when suddenly they are hit by an oncoming snow plow. Tragically, both Katie’s parents are killed, leaving Katie to live with her roboticist aunt Gemma (Allison Williams).

Gemma, however, is not necessarily equipped to raise a child. As Gemma puts it “I can’t even take care of my own plants, let alone a child.” However, she doesn’t want Katie living with her grandparents in Florida so she decides to be her guardian. The relationship between the two is a little rocky at first, as Gemma doesn’t quite know how to help Katie cope with the loss of her parents. There might be a solution to this however…

Gemma has been working on a secret project with her partners at Funki. She has been creating a fully functioning android that can act and speak on it’s own called Megan (stylized as M3gan — short for Model 3 Generative Android). This android, or living doll, Megan, will be able to pair with children and spend time with them learning, helping the child with things like school, reading stories, reminders about cleaning up, and playing with them. This way parents can focus on other things that are “more important.”

At first her boss, David, isn’t jumping up and down about the idea. But, once he sees Megan interacting with Katie, he’s convinced that Megan is the greatest invention since the car and will “kick Hasbro’s butt.”

But an android as smart as Megan is bound to have a glitch here and there. After all, nothing is foolproof…

Horror films can, at times, take themselves way too seriously or try to make an audience contemplate deep, philosophical lessons, when the truth of the matter is films that fall under horror or comedy should entertain, not teach. Horror is one of my favorite genres, truthfully, because 1) most of the situations are pure fantasy and 2) it has the ability to laugh at itself.

“M3Gan” (yes I’m writing the title as it’s been promoted) is a film, as other critics have stated, that pokes fun at itself in a variety of ways. There are so many horror clichés in “M3Gan” that it would be impossible to list every single one in this review. Yet, that’s what makes “M3Gan” fun to watch. I could not help but sit back, watch and laugh when M3Gan does her (now Tik-Tok famous) dance before she continues on. Another example includes the stereotypical characters and how you can predict who is going to meet their end (again, a prime example of poking fun at the horror genre and itself).

“M3Gan” is a cinematic marvel at times. The doll is just plain eerie, particularly when she’s NOT speaking. Anytime M3Gan is asked to turn off you are always asking yourself, “Is she really off?” For example, there is also a really creepy scene where M3Gan is staring out the window, only moving her eyes, as Katie is playing, observing and identifying everything, not responding to what Katie is asking her. A horror film that can scare more with silence than sound is a film worth seeing (take “A Quiet Place” for example).

What I can really appreciate about “M3Gan” though is the balance between the characters and the story. There is enough of a backstory and arc for the characters that allows for the film to maintain a sense of continuity. The film never feels like it is dumbing down to the audience, nor does it feel cheap or cheesy. Additionally, while there are no deep philosophical lessons, there are some strong messages regarding grief and family.

I can say this though: M3Gan makes Chucky look like a saint. When M3Gan does kill someone on screen it’s not pretty. While these scenes don’t occur frequently on screen they are pretty horrific to watch, just enough to teeter on the edge of the PG-13 rating. It’s enough for me to question whether or not producers James Wan and Jason Blum could have gone a different route with some of their decisions. Additionally, some of the foul language feels unnecessary, out of place and, honestly, just plain awkward from some of the characters—like it was forced.

VIOLENCE: There is a car crash and two parents are killed and a child is seen in a hospital (the child is okay). A dog begins biting Katie (we see her scream but the camera pans away quickly—nothing graphic). A dog is snatched by M3gan (we can assume she killed the dog). A kid presses a spiked ball deep into a child’s hand causing pain. A boy has part of his ear ripped off by M3Gan. A kid is run over by a car (we see the car coming toward him and it continues to drive but nothing graphic is shown). We do see a child’s feet sticking out a body bag afterwards though. Someone is sprayed by a hose, shot in the hand with a staple gun and then poisoned with insecticide spray. A child is seen throwing a huge tantrum, throwing things around the room and slapping an adult. A guy is stabbed with a blade and killed. Someone is stabbed in the neck (off screen). We see the bodies from these kills later. There is a battle between characters and M3gan with injuries between all parties involved.

SEX: A smart device informs Gemma she has five invites from Tinder. David asks a coworker if he was on a site for pornography.

ALCOHOL: Coworkers are seen drinking after an event

OTHER: A toy can be electronically fed, and when it does it can poop items out later. Gemma lets Cady use as much screen time as she wants, no strings attached (Cady’s parents originally didn’t let her do that). Cady is incredibly disrespectful to Gemma in instances. Another child tells his mother to f*ck off.

Cady encounters one of the most difficult struggles a child, or even an adult for that matter, will ever have to go through at such a young age: the loss of her parents. When Gemma is given guardianship over Cady, she doesn’t know how to help Cady with the loss of her parents so she tries to distract her with M3gan—with technology. Technology is ONLY a distraction.

Grief is a complex emotion, one that very few people know how to process. Hollywood’s answers are often to shrug their shoulders or say “let it out” or any other option that doesn’t acknowledge turning to the One who can truly carry us through our grief, Jesus.

Jesus knows our pain, He knows our suffering. He cries when we cry, He grieves when we grieve. We can come to Him and to the Father we are in mourning, or confused, or in pain. Jesus said:

“Come to me, all you who are weary and burdened, and I will give you rest. Take my yoke upon you and learn from me, for I am gentle and humble in heart, and you will find rest for your souls. For my yoke is easy and my burden is light.” —Matthew 11:28-30

“Blessed are the poor in spirit, for theirs is the kingdom of heaven. Blessed are those who mourn, for they will be comforted.” —Matthew 5:3-4

And as it is written in the Book of Psalms:

“The LORD is close to the brokenhearted and saves those who are crushed in spirit.” —Psalm 34:18

Walking out of the theater, the manager asked me what I thought about M3Gan. I told him it was like if the film Terminator met the film Chucky. It sounds like a strange combination on paper, sure, but on the big screen, it’s a lot of fun. I am reminded that sometimes producer James Wan (and Jason Blum too) goes too far with some of his films, as the violent scenes are VIOLENT, even if some of the more graphic stuff is never seen (the most disturbing scene being a child being run over by a car [even with the event off screen we see the aftermath]).

Still, placing the violence and language aside, as a horror fanatic, “M3gan” is as good as I had hoped it would be. The performances are masterful, the atmosphere is unnerving, and the pacing is just right. Will this film be right for all Christians? No. Should you leave the children at home if you decide to go? Absolutely! Strong discernment is advised.

Positive
Positive—I found this movie pretty surprising and entertaining. This movie was fairly suspenseful, but had some comedic movements to balance things out. Cussing is minimal, and there are a few violent scenes but nothing overly graphic. The movie actually had positive messages on families staying connected with one another and not allowing ourselves to become too dependent on technology. I haven’t seen a suspenseful/horror flick with a positive message in a long time, so two thumbs up for Hollywood. I wouldn’t take my child to see it, but it’s worth going out with a friend or significant other to see it. I’d recommend Megan, and I’d pay money to see it again.
My Ratings: Moral rating: Better than Average / Moviemaking quality: 5
Sarah, age 32 (USA)