Orlando Bloom and director Ridley Scott on the set of 20th Century Fox’s “Kingdom of Heaven.” 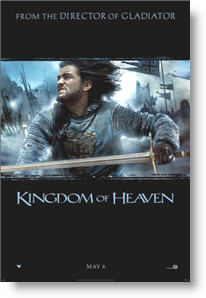 See our review of “Kingdom of Heaven”

Due to the weightiness of the subject matter, it seemed that the interviews I had with Ridley Scott and Orlando Bloom in Los Angeles about their film “Kingdom of Heaven” could have carried on much longer. In the short time allowed, they revealed some important insights into their personal beliefs, this film, and their intentions in making it.

“Kingdom of Heaven” is described as “an epic adventure about a common man (Orlando Bloom) who finds himself thrust into a decades-long war (the Crusades). A stranger in a strange land, he serves a doomed king, falls in love with an exotic and forbidden queen, and rises to knighthood. Ultimately, he must protect the people of Jerusalem from overwhelming forces while striving to keep a fragile peace.”

Producer Ridley Scott behind the camera, directing “Kingdom of Heaven”

I asked the film’s producer and director, Ridley Scott, what kind of reaction he anticipates from Middle Eastern audiences, especially Muslims. He replied, “What do you think? You’ve seen this film. Do you think it’s balanced?” After I said yes, he said, “You just answered it.” He then went on to explain,

That was the greatest difficulty… how do you tell this story, particularly in these given times?.Now don’t forget we pre-decided this before the Gulf War.right on the edge of 9/11. I had already made “Black Hawk Down” before 9/11.And then 9/11 occurred, and we thought that it would be shelved forever, and instead, within forty-eight hours, we thought it would actually be quite relevant to put it out right now. That is how we got it out before Christmas.

Whilst that was happening, I had already talked to Bill Monohan, whose pet subject is just this period of about a hundred and seventy-six years of the Christian/Catholic (if you like) conflict. I think “crusade” means literally “war of the cross.”This film would have happened with or without the Gulf War, with or without 9/11.It’s a passion of the period; it’s a passion of the idea of what drives a person.to pursue his doubts that he has about his faith. That’s who this character is.

The character is on a spiritual journey to actually reinforce, or not, his doubts about the existence of God. 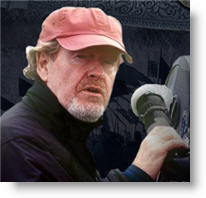 The central character is on a journey of faith for himself.What he finds out during it, at the end of the film, if you watch carefully—I think he’s still probably an agnostic.

The signatures of that occur at the end of the film when.the Muslim (who is now called Nasir), actually says to him, “How could you have done all the things you have done if God was not with you?” And then what happens is, there is a good-bye. And what is interesting is Balian says good-bye in Arabic, and he [Nasir] says good-bye [in English], “God be with you.” If you watch for these little signals, you’ll find the Muslim has gone away a little bit Christian, and he [Balian] has gone away a little bit Muslim.

The idea of these religions being able to peacefully coexist seems to be one of the themes of the film. At another point, Scott quoted the beginning of the Koran where it says, “God is good,” and then remarked, “They are talking about the same God as us.”

Scott was very open and disclosed that he, like his main character, is on a journey of faith. He said,

“I’m agnostic. I think “agnostic” means “not sure,” so I’m not sure. The idea of agnostic is valid. It’s a question.”

“So there’s me at church thinking, ‘Geez, Why am I here? I’d rather be playing tennis.’ Seriously.” —Ridley Scott

Scott explained that during his youth, he was the only one in his family who really went to church.

So there’s me at church thinking, “Geez, Why am I here? I’d rather be playing tennis.” Seriously. And then I was an altar boy. And then it was a year before my parents realized that I actually have not, in fact, turned up to be an altar boy, and, in fact, I was indeed playing tennis for a year on Sunday evenings.

So that’s when they said, “Well, I guess that’s not for you.” I said, “Not really.” So I had decided fairly early on that I simply wasn’t certain about this [Christianity], because I wasn’t getting specifics, I wasn’t getting voices. I was feeling no different.

The conviction Scott ultimately seems to have about life is that everyone is responsible for his own actions. His philosophy is, “Paint your own house. Plow your own land. Take care of yourself.” He says, “If everyone did that, that would be a pretty good start.”

Scott related his philosophy to a scene in the movie involving the main character, Balian, and his spiritual counselor, named “Firuz.”

The scene comes off him [Balian] saying, “I think God has forsaken me. I’ve lost my religion.” “No,” he [Firuz] says. “Listen. The word religion is only a label.”

“I’m not in denial of God, I’m in huge question of the possibility that there may not be this voice that is God.” —Balian of Ibelin

He’s.a good man. He is the symbol of the one really good man through the film.who doesn’t even get angry when he [Balian] says, “I’m not in denial of God, I’m in huge question of the possibility that there may not be this voice that is God.”

And he [Firuz] is saying, “Well, that’s okay.” He [Firuz] is trying to ease him [Balian] into the right direction. He is saying, really, if you just start with being a good man every day or not.that’s a pretty good start.

At that point, Scott threw in his own candid comment:

“And by the way, if we had that, we wouldn’t have a.problem, would we? I don’t give a damn who I work next to. So why can’t it be the same everywhere else? And that’s an incredibly naïve thing to say, but there you go. It’s what I believe.”

“What man is a man who does not make the world better?” —Balian of Ibelin 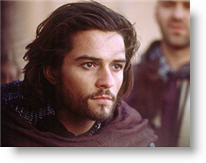 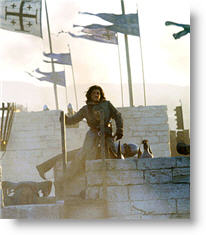 Orland Bloom’s views parallel those of Ridley Scott, especifically in terms of his character, Balian, of whom Bloom said,

“I think ultimately, he [Balian] is a man on a journey. It’s a coming-of-age story for a man who is on a journey of spiritual discovery, trying to understand the bigger questions in life, and the meaning of life and death.”

Probing further, I inquired about the line where his character, Balian, is asked, “How could you have done all of these things unless God was with you.” I asked Bloom at what point he, as an actor, finds that Balian acknowledges (or not) that God has been working in him as others seem to be noticing—since I was not sure when that happened:

I agree. I think he’s still unclear at that point. He goes by right action from one day to the next. And I think you’re right, at the end of the movie.I think he is unclear about his religion still at that point because it hasn’t become apparent to him.

Expounding on these ideas, Bloom shared some things that he has learned over his 28 years, and what he is influenced by.

Orlando Bloom in “Kingdom of Heaven”

I was at a U2 concert last night, and Bono—who to me is such a fantastic representation for all young people and to anyone today—he had the 1948 U.N. Human Rights Declaration, which, the opening chapter was: we are all equal, regardless of race, color, your religion, your sexuality. We are all equal in the eyes of one another, and we should treat one another with the same respect that you would anyone.

The way I see it is that we’re living in this world, which we share, and there has always been jostling for power and war over.money, power, land, religion, oil, water—and yet we share this place. We should be able to live in harmony. Surely that’s what any God—whoever your God may be—would tell you. That it’s about humanity. If it isn’t about that, then I’m not sure what it’s about.

An apology from Christians to Muslims regarding the Crusades—Read it

What is Islam? What do muslims believe? Answer

A skeptic asks: “Why should any one have to accept ancient hearsay as evidence for the existence of a god? If Jesus is who he said he was, then he shouldn’t have any problem personally convincing me of that fact, especially considering the penalty with which he is supposedly ready to zap anyone who doesn’t believe. In fact, I’d say, all things considered, he is a twisted monster for not doing just that.” Response

SUFFERING—If there is a God, why does He allow innocent people to suffer? Answer

Is the Bible truth or tabloid? Answer

With so many denominations and religions, how can I decide which are true and which are false? Answer

Tying this in with the film and his character of Balian, he continued:

At that, Bloom was asked,

“Do you think that people, within their human nature, have the capacity to do that on their own?”

After a sincere pause, Bloom said:

Hope. I hope that people have the capacity to do that on their own. And I think we have to believe that to be able to live in this world together. If we don’t have that hope, then the outcome for humanity is a very gloomy one at best.

Truth is, as sinful human beings, no one can accomplish any of their greatest hopes and highest ideals apart from Jesus Christ.

Like Scott, Bloom was also asked about his thoughts and concerns on how this film will be received by the Muslim world. He replied,

To be honest, I know who Ridley Scott is, and I know the integrity he has as a director—and I know that he is very capable of being able to sensitively handle this subject.

I think that you feel the balance quite clearly.This is a very unconventional idea, because at the end of it, you see a man who is still trying to understand what it all means.

I think what the message of this movie is, if it isn’t about humanity and Europe and your fellow human beings—whoever they are—then what is it about? Because ultimately it must be about life—and preservation of life and peace.

“Ultimately it must be about life—and preservation of life and peace.” —Orlando Bloom