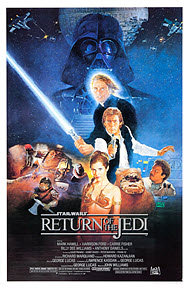 “Return of the Jedi,” the third movie in the “Star Wars” trilogy, is a rip-roaring, action-packed, science-fiction adventure story. It is chock full of daring rescues, high-speed chases, swashbuckling sword fights, and dogfight-type battles among space fighter ships. It is the story of Luke Skywalker, noble and true—a young man in training to become a Jedi Knight. He leads a small band of rebel freedom fighters in a daring attempt to sabotage a massive space-based battle station—a planet killer—which would give ultimate destructive power to the evil forces of the Galactic Empire.

Although the movie was first released in 1983, the special effects are still mind-boggling and effective, even by today’s standards. The space battles are loud; the speeder-bike chases are dizzying; the walking tanks are impressive. There are dozens of different types of alien creatures, all imaginative and realistic. The aliens range from hideous, terrifying monsters to the cuddly, lovable teddy-bear-like Ewoks. There is Jabba the Hut, a grotesquely obese slug-like creature who is a mafia-style slavelord; there is a sand monster that seems to be all teeth, tentacles, and jaws; and there is a hideous, terrifying dungeon creature that kept me clutching my seat armrests.

This movie, like its predecessors, has a strong spiritual component, but its spiritual perspective is not Christian. The “god” of Star Wars is an impersonal force that draws its power from all living things (pantheism) and has a good side and an opposing dark side (dualism). This “god” itself encompasses both good and evil, unlike the true God who is light, and in Him there is no darkness at all (1 John 1:5). It is good for Christians to be aware of the counterfeit nature of the spiritual perspective of the “Star Wars” movies, but if you can set that aside, the movies are worth the trip.

It is refreshing to see a movie where the good guys are good and the bad guys are bad, and the good guys prevail. The plot is simple and straightforward, but keeps you engaged at all times. There’s plenty of action, plenty of suspense, and plenty of noise. All in all, it’s a fun ride.

There’s no profanity, nudity (though Princess Leigh is seen in what amounts to a small bikini), or sex, but the scary monsters and the grossness of Jabba the Hut may be too intense for younger children.

…If we say this movie is O.K. because it portrays “a good force” then we can say new age is O.K., “White” witchcraft is O.K., and all other seemingly “good evils are O.K. Remember the devil himself can seem as an angel of light. Please beware of falling into the devil’s trap “False messiahs and false prophets will come and work great miracles and signs. They will even try to fool God’s chosen ones.” Matthew 24: 24

Hope M. Krumal, age 19
I think Star Wars is the greatest movie trilogy of all time! It is a refreshing change to see movies that are so entertaining, and yet have no profanity, nudity, or sex in them, just good, clean entertainment. They have such a strong sense of right and wrong, of good and evil, and of good overcoming evil, that they are true classics for viewers of all ages!

Joe Braun, age 21
I think that the touch ups on this film were probably the best!! The new ending blew me away! ooops, did I just ruin that? heehee Star Wars remains a true set of family movies. WOW… compare this with the TRASH we let ourselves see nowadays! As good as it may be though, I would still rather read my Bible. Praise the Lord! Who is with me??

Matt Man, age 22
This is my second favorite in the Star Wars Trillogy. I think that all of these movies are very good, and they have no sex or anything that other movies have. All they have is action, and a little grossness (as in Java the hut) but pretty much that’s it. And these movies prove that America does not have to see so much sex and profanity in movies, because so many are going to see this and the other two, and they don’t have any at all. I think this is like the coolest movie.

Julie Kingsborough, age 14
Aside from the “Force” as an all powerful entity, (and perhaps all the killing) the story leaves you with its ultimate meaning, that of redemption. without giving too much away, George Lucas points out that the next 3 movies (the prequels) will heighten this theme. basically star-wars is about anakin skywalker’s (Darth vaders) fall and redemption. This movie really ties it all together.