Star Wars: The Rise of Skywalker

for sci-fi violence and action. 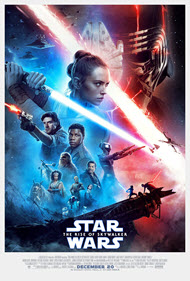 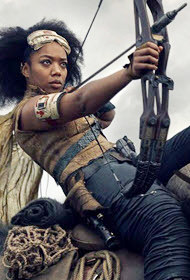 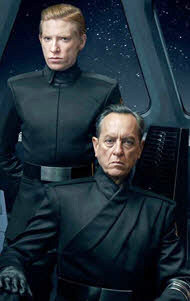 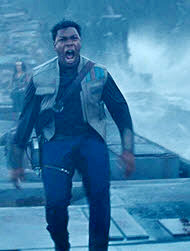 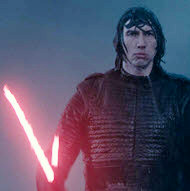 The continuing fight between good and evil in our world

What to do when people urge you to bad things

Learn about The TRUE Force 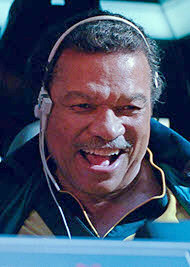 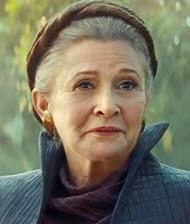 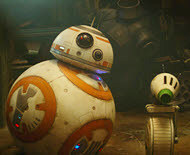 Emperor Palpatine (Ian McDiarmid), who was killed by Darth Vader in the finale of the original “Star Wars” trilogy “Return of the Jedi,” has let it be known that he has returned and The First Order’s Supreme Commander Kylo Ren (Adam Driver) will stop at nothing to find and destroy this new threat to his empire. But when they finally meet, an unholy alliance is formed instead so that they may strengthen the empire under Ren while the Emperor pulls the strings.

Recognizing the threat a resurrected Emperor would pose to their crippled Rebel Alliance, Rey (Daisy Ridley) breaks off her Jedi training under Leia (Carrie Fisher) and together with Poe (Oscar Isaac) and Finn (John Boyega) set out to find the legendary Sith world to destroy Palpatine once and for all.

The Rebellion’s trio will visit worlds of desert and sea in order to find the one artifact capable of guiding them to the Sith world. New friends and alliances will be made along the way before Kylo Ren confronts Rey with his final offer to join him or be destroyed. Will Rey’s vision of both her and Ren ruling from the Dark throne come true or is there still one last hope for the galaxy?

Billed as the conclusion to the “Skywalker” saga, “Star Wars: The Rise of Skywalker” does just that, but not without some material—expected and surprising—that merits caution.

Violence: Moderate to Heavy. Many are killed by laser fire, explosions, fire or are thrown at high speeds to their death. Mostly bloodless, there are scenes showing arms and limbs being cut off by light saber and in several cases impaled to death. Brief but grisly imagery includes skeletal remains and disembodied clones floating in a solution. Kylo Ren chokes a general and slams him against the ceiling at the same time. Lastly, a planet is destroyed as seen from orbit.

Sex/Nudity: Minor but blatant. No sex or nudity is shown, but a kiss between two female Resistance fighters takes place amidst a large celebration. Considering that in other “Star Wars” films only main character love interests are ever shown kissing, this indicates a clear choice by Disney and the Director. Poe flirts with an old friend and asks for a kiss, which she declines.

Much can be made about how the “Star Wars” films touch upon New Age concepts and covert occult-like symbolism, and I do not deny their existence. However, I believe that the themes that resonate most with people are those that touch upon undeniable truths, and the most powerful one addressed in the film is that of our ‘sinful nature.’

When Luke Skywalker (Mark Hamill) encourages Rey that “some things are stronger than blood,” he is referring to the internal struggle Rey is having against her own flesh.

Conversely, Kylo Ren is her polar opposite, as he has already succumbed to the evil nature within him, and his internal struggle is instead with the spark of good within him as suggested in “The Force Awakens.”

Interestingly, the greatest spiritual victory shown does not come in the final act but before it, when a character must confront their natural tendencies and conclusively put them to death. The Word of God calls all of us to do the very same, and the reward will be great.

“So put to death the sinful, earthly things lurking within you. Have nothing to do with sexual immorality, impurity, lust, and evil desires.” —Colossians 3:5

“Therefore if any man [be] in Christ, [he is] a new creature: old things are passed away; behold, all things are become new.” —2 Corinthians 5:17

The TRUE Force and Light vs. Darkness

Learn about The TRUE Force

What is regeneration—becoming a New Creation?

Although this victory is seen as achieved through ‘force’ of will alone, we must acknowledge that, as the Bible and human history have shown, mankind is incapable of wrestling successfully against sin without help from Almighty God.

“For I can do everything through Christ, who gives me strength.” —Philippians 4:13 NLT

The Word of God likewise admonishes those who do not reflect the will of our Father in Heaven, but instead hear and listen to the myriad of voices Satan, the Prince of lies uses to speak to his own.

“Ye are of your father the devil, and the lusts of your father ye will do. He was a murderer from the beginning, and abode not in the truth, because there is no truth in him.” —John 8:44 KJV excerpt

The devil, as personified by the Emperor, is the Prince of lies who promises that if you do his bidding “you will ascend,” when in fact the reverse will come to pass exactly as our Lord Jesus said.

Fans of the series will appreciate the way the film honors both Leia and Han’s memories during their touching send-offs as this entry does mark the end of their journey along with that of Luke.

In my opinion, “Star Wars: The Rise of Skywalker” is a definite improvement over “The Last Jedi” which seemed determined to put to death some aspects of the “Star Wars” universe as we know it. Rey and Kylo Ren are the central focal point for this movie, and the conclusion to their story arcs result in a mostly satisfying second half that features a strong emotional payoff to match.

Although the film feels a bit derivative and the threats feel recycled, the film does its best to restore the series from where the last film left off and mostly succeeds.

This cannot be recommended for children due to dark theme, suggested possession, and subtle political messaging.

As followers of Christ, please be aware that ungodly messaging will continue to be increasingly woven into our entertainment, and we must guard both the hearts of future generations and our own.

“…but wanting to have their ears tickled, they will accumulate for themselves teachers in accordance to their own desires, and will turn away their ears from the truth and will turn aside to myths.” —2 Timothy 4:3-4 NASB excerpt

The darkness of paganism is masquerading as light. The “Star Wars” franchise has helped greatly popularize these Godless fantasies and influenced people’s acceptance of dangerous false beliefs about reality.

According to a 2011 census, “Jedi” is now the most popular faith in the “Other Religions” category in England and Wales, taking 7th place among all the major world religions. It is a church inspired by George Lucas’s “Star Wars” films. The website of the Jedi Church states:

“The Jedi church believes that there is one powerful force [energy field] that binds all things in the universe together. The Jedi religion is something innate inside every one of us, the Jedi Church believes that our sense of morality is innate. So quiet your mind and listen to the force within you.”

As the familiar saying goes, “buyer beware”—the Jedi religion is paganism pure and simple. The Jedi Church even warns its members to be cautious of the dark side of the force. It’s territory that no Jedi should dare to enter. But how is someone to know when he crosses over from the light side of the force to the dark side by simply listening to the voice within? By what standard can good and bad be judged in this pagan belief? It would be arbitrary to assert some absolute good or evil in a religion where no absolutes, like the claims of Jesus Christ, are tolerated! In truth, there is no such thing as a light side of paganism. It’s all darkness, and it is a consuming darkness, like voodoo, which originated in sub-Saharan Africa that claims to be used to heal or to harm.

Streaming Video: “I believe there is a force…” but not a God
from Living Waters, a Christian Answers Team Member
length: 7 minutes

Comments below:
Positive
Positive—Thanks for the good review.

FILMMAKING QUALITY— I liked the interactions of the main stars, I especially liked how they honoured Leia, Han and develop the love/hate relationship between Rey and Kylo Ren. I loved the past references to older movies. The special effects were also good.

It was a pity that much of the adventure hangs on “luck;” like how they found the wreckage of the Death Star and then the item they were looking for. It would have been better for the characters to use their own skills to solve the problems they faced. I also do not like some of the ways they used “The Force.” For example, the idea of giving one’s life force to another sounds rather weird and contrived only to make the plot work.

The movie reminds me that I too have had a change of name. I am Ashley, adopted son of God; not just Ashley, son of fallen Adam.

On the down side, “The Force” is not a Christian concept and the behaviours of the people were generally average.
My Ratings: Moral rating: Average / Moviemaking quality: 3½

Ashley, age 52 (Australia)
Positive— Having been a Lifelong Star Wars fan, I can honestly say, “The Rise of Skywalker” was very well done, superb special effects, lots of action, it was a pleasure to see Lando Calrissian again, nothing really morally offensive about this film, this movie showed the importance of how teamwork, cooperation and never giving up are important to overcoming evil and accomplishing goals, great chemistry between the cast members, incredible music by John Williams, overall, The Rise of Skywalker is a great addition to the Star Wars saga.
My Ratings: Moral rating: Good / Moviemaking quality: 4

Jeff Andrew Winters, age 39 (USA)
Positive—While there were aspects of the film I liked, I thought it tried too hard to not be “The Last Jedi.”
My Ratings: Moral rating: Average / Moviemaking quality: 4½

Brian Wallace (USA)
Neutral
Neutral—WARNING NOT a children’s movie!! Movie is far better than the last one! But more dark mental physic connections and possession of evil Sith souls/possession is prominently displayed. **!!!* Lesbian kissing scenes at end celebration. Disney continues to draw Star Wars fans and young viewers to darker version than the original series. Would not recommend for children (due to a lot of violent deaths and new Force mysticism). Due the rise in mysticism/occult in current days-Parents should have discussion with teenagers about the similarities and the need to be aware the dangers of white/dark mysticism the movie so closely propagates.

Effects are excellent, and the plot moves quickly, great gotcha moment’s with great battle scenes. As a Star Wars Fan Big thumbs up **! BUT as a Bible-believing Christian thumbs down.
My Ratings: Moral rating: Very Offensive / Moviemaking quality: 5