THE FORCE really exists!
But it is different than the fictional one of “Star Wars.”

A long time ago THE FORCE was surrounded by strange six-winged creatures. Each one shielding its eyes with two of its wings from The Force’s unapproachable light. A rebellion led to a war in the heavens. The rebel leader, known as the son of the morning, was cast like lightning down to an isolated planet.

As the leader of THE DARK SIDE, he began to work his evil in the hearts of the inhabitants of the planet, blinding their minds, and bringing slavery, suffering, death and destruction to the entire race.

The Force stood for Truth and Justice, therefore the planet was warned that it was going to be cleansed of all evil. As the essence of goodness, The Force (known as “The Bright and Morning Star”), became an inhabitant of the planet.

THE DARK SIDE was so strong that when The Force was revealed, he was hated and allowed himself to be killed, as a way to defeat The Dark Side.

However, he was too strong for death, and defeated its power.

Then those who listened to the inner LIGHT (that which revealed the will of The Force), turned from evil and yielded themselves to Him. They had THE DARK SIDE removed from their hearts and were saved from death and destruction.

The story of “Star Wars” comes from the imagination of one man. Reality is that Almighty God is The Force for good in the universe. THE DARK SIDE is Satan. The Bible says he has blinded your mind, works in your heart, and has taken you captive to do his will. He is the “god of this world.”

Are you on the Dark Side? Or are you going to live eternally with The Force of Light?

Is the DARK SIDE at work in you? 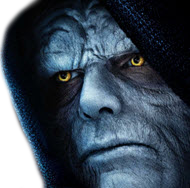 Look past the fiction of “Star Wars” and DISCOVER THE IDENTITY OF YOUR REAL ENEMY, the one who is daily working to destroy you and everything that is truly good.

Judge yourself. Have you broken the Ten Commandments?

Knowing that God has seen your thought-life, and every deed done in darkness, will you be innocent or guilty on Judgment Day? You know you will be guilty.

So, will you end up in Heaven or Hell?

The only thing you can do to be saved from His wrath, is to repent and put your faith in the only true Savior, Jesus Christ.

When He died on the Cross, He took the punishment for our sins. He stepped into the Courtroom and paid the fine for us. Then He rose from the dead, defeating death.

Confess your sins to God now, put your faith in Jesus, and you will pass from death into life.

Those who obey the Gospel are no longer in darkness, but are clothed with the “armor of light.” Your Light Saber is the “two-edged sword” of the Word of God.

Read the Word daily, hide it in your heart, obey it, and use it against the enemy.

WHY is the world the way it is?
Filled with oppression, suffering and cruelty?

Our Reviews of “Star Wars” Games