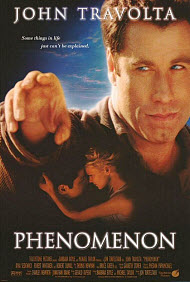 “Some things in life just can’t be explained.”

This unique mystery is, arguably, the best romantic drama of 1996. It is a film about relationships—deep, lifelong friendships and a tender new romance, with frequent humor balancing tension and suspense. Though exemplary in the way that the script was crafted, it also carries baggage that most Christians will prefer were not present, but which will not significantly decrease its overall audience.

“Phenomenon” opens with warm and beautiful scenes of northern California farm life, and a nearby small town. It reveals a simple but very likable mechanic, George Malley (John Travolta), a 37-year-old bachelor trying to earn a date with Lace, a pretty young mother who has recently moved to the area. George is anxious to get to know Lace, but she has sworn off men, still hurting because she was recently deserted and divorced. His persistence continues, however, and as any moviegoer would guess, he eventually “gets the girl.” (What good would a love story be if at some point the couple didn’t actually fall in love!)

In the middle of all this George gets drunk at his own birthday party and, while outside to wish a friend good night, is the solitary observer of a brilliant light which knocks him to the ground. Both George and the audience are led to believe that he has been endowed by extraterrestrials with special powers when, the next morning, he discovers himself to be an instant genius. George the simple, broad-smiling town mechanic now possesses super sharp senses, and has the uncanny ability to learn extremely complex concepts with amazing ease and incredible swiftness.

He is soon reading several books a day, learns complete languages in only minutes, can feel upcoming earthquakes long before seismology equipment can detect them, and realizes that he can partner with the energy around him to levitate small items such as pens and books (this is one example of the New Age belief system that quietly co-exists as a secondary sub-plot throughout the film). His new and expanding sense of the world even makes it possible for him to locate a dying young boy, design energy saving inventions, play matchmaker for his best friend, and more. Unfortunately, the townspeople begin to fear his “powers” and make him feel unaccepted, except for the town doctor (Robert Duvall) whose father-like love for George drives him to understand the source of George’s newfound abilities.

It is not until George sees the light a second time and falls unconscious that he learns the surprising true reason for his extraordinary knowledge and powers—a reason that has nothing to do with UFO’s or extra-terrestrials.

During his ordeal George is held by the military, pursued by academia and interrogated by the FBI. Now, with surgeons determined to use him as a human guinea pig, he escapes from his guarded hospital room and makes his way to his beloved, Lace. The film has a bittersweet ending, but is both encouraging and thought-provoking.

“Phenomenon” is, at its core, a wonderful film. It does, however, contain a couple of sensual/tender love scenes that make it inappropriate for viewing by anyone but adults, preferably married couples. The sequence where Lace confirms her love to George by giving him a shampoo and haircut will undoubtedly go down as one of the most sensual and meaningful fully-clothed haircuts in movie history!

Warning to parents: In addition to the inferred pre-marital sex and sensuous scenes described above, this story suffers from a couple dozen profanities, inferred fornication, and a quick full buttocks “mooning” near the beginning. This reviewer therefore feels that a PG-13 rating would have been more appropriate, and more accurate.

Comments below:
Positive
I loved it!. John Travolta is so good! I cried through the whole thing.

Allison Jenkinson, age 14
I thought it was a beautiful movie, one of John Travolta’s best. I was a little concerned at the beginning, until they disclosed that his powers were nothing more than a brain tumor gone amuck. I would not recommend it had they not disclosed that at the end. …I could have done without the bedroom scene (it was not necessary to the story plot). …The ending was heartbreaking and heartwarming at the same time.

Donna Denman, age 42
Negative
…To me this movie (is) another attempt to desensitize Christians to the idea of psychic powers and abilities. …No I’m not “stuck in the mud” but after being around a little while I saw this movie as once again promoting pre-material sex (which is biblically wrong) and also a thin veneer of Hindu philosophy.

Rob Dyck, age 29
I’m sorry but I thought this movie was long, dull, and BORING! I felt nothing for Travolta’s character and was glad when the movie was over. Bad choice, John.

…I thought this movie bitter-sweet in plot, in message and in spiritualiity. We ARE capable of so much more, but sin has corrupted us.

Thomas Morgan, age 40
Comments from non-viewers
Negative—When I read the description of this movie, I heard a lot of comments about how good the movie was, however, there are parts of the movie that wouldn’t be seen as Christian. Jesus said we are to be in the world and not of it. In my opinion, a Christian should not compromise their heart and Christian values. There is a story about some teenagers who wanted to see a movie that was inappropriate, and the boys said that it only had a few inappropriate parts, and they really wanted to see the movie anyway. The dad agreed, but, with an idea in his mind. While they were gone he baked them cookies. When the boys returned they saw the cookies, and they were hungry!! The dad said “go ahead and eat them if you don’t mind cat litter and mud!” The lesson of this story is if the boys didn’t mind watching a movie with inappropriate parts then they wouldn’t mind eating cookies with inappropriate ingredients.—“Phenomenon”

Tina, age 52 (USA)
In the review it was stated, “Though exemplary in the way that the script was crafted, it also carries baggage that most Christians will prefer were not present, but which will not significantly decrease its overall audience.” This is a sad commentary on the state that most Christians seem to be in. …The first question that should be asked about any movie (or book, music, TV, etc) is: does it fit with Philippians 4:8? If it doesn't, then it should not be part of our lives. I realize that this is strong and can be difficult to follow in day-to-day life, but we can choose not to spend our money on things that do not stay in line with Scripture. Isn’t that what being a Christian is all about? Would Jesus go to see this movie? Would you invite Him along and then explain away the “bad” parts? Sometime or other, we must take a stand and then stand firm.