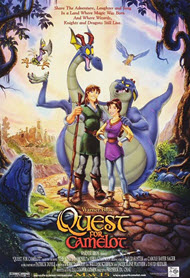 Back in medieval times, daughters had their dreams, just like sons did. Kayley dreamed of one day being a knight like her father, Lionel, even though it was unheard of to have a female knight. Lionel was a knight for the good King Arthur. However, an evil knight, Ruber, caused all kinds of chaos, killing Lionel in the process. Ruber was banished from Camelot, but he returns years later and steals the fabled sword Excalibur when Kayley is just a teenager. She meets up with a blind hermit named Garrett and together with some unusual companions (two-headed “baby” dragon with each head having its own distinctive character, silver-winged eagle) to try to regain Excalibur and save Camelot. So our story begins…

From a Christian standpoint, there are elements that many will not agree with. The use of sorcery and violence are the top two. (Numerous violent scenes include sword fights, a monster hit in the crotch with a stick, men killed with swords, magic potions turning men into monsters, etc.) There is no obscene or profane language, but one crude word for vomit. Also, there is a kiss between the two dragon heads (portrayed as males), but this doesn’t seem to be any homosexual agenda item. Overall, “Quest for Camelot” is too scary and suspensful in several spots for younger viewers and should be previewed by their parents.

While the animation was not as detailed as you would expect in spots, they did do a somewhat decent job of merging traditional animation with computer-generated animation. The music and singing was acceptable, there was just about the right amount. However, you probably won’t be humming any of the tunes after the movie. There is a dash of humor thrown into the pot as well.

All in all, a decent non-disney animated movie worthy of matinee prices for big and little kids. For us older kids, watch closely and see how many Warner Brothers' references or scenes you see (hint: Acme, Road Runner scenery, etc.)

“pure fun”…
“Quest For Camelot” was an excellent movie that I would recommend for children of any age! The songs were catchy, the plot was undiluted and easy to follow, and most importantly—it was pure fun! The main point of contention with this film seems to be the use of magic/sorcery, but I would ask: If bad guys don’t do evil things, how are they going to be the bad guys? The villains were portrayed as indisputably evil, and they were vanquished in the end like a villain should be.

Anyone who thinks that this film is too scary for children should also dismiss “The Lion King,” “Beauty and the Beast,” “Anastasia”, and countless other popular children’s films. Kudos to Warner Brothers for creating a fun fantasy film that Christians can take their kids to without having to worry about new age philosophy (“Pocohontas”) or crass humor (countless other Disney flicks).

Paul Glenn, age 25
“the violence was far too strong”…
Although most of the other folks who took their children to see this movie were not too uncomfortable with it, I’d have to say that I wish I’d previewed it first. My son’s are 3, 4, and 6 and even though they didn’t seem to be bothered by the demonic looking henchmen, the violence was far too strong for children to see. In this day and age when violence is all around us, kids need to be directed away from it rather than have them constantly bombarded with it. This film was really a waste of time and money, with no clear values for younger children to pick up on. What they remember when they leave are the violent scenes and that’s about it. I don’t recommend this film for any age child to see.

Barb, age 37
“my children were terrified”…
My children ages 7 and 4 were terrified of this movie. I felt it was full of evil that was extremely frightening for them. I do not feel it is appropriate for young children. I agree with the review that the magic potions and sorcery are scary and I think they are completely inappropriate for Christian families. The only redeeming quality was the blind hero being completely capable of functioning and overcoming his handicap.

Sandra Michaud, age 44
evil elements softer than in “Anastasia”…
I took my two daughters plus two of their friends (ages 6 through 10) to Quest for Camelot and they thoroughly enjoyed the movie. I found it somewhat unimaginative. I also thought the animation was not very good. But other than that I would by-in-large agree with the reviewer and Mr. Rodriguez. I thought the magic/evil elements in the movie were much softer than Anastasia, which contained scenes that were down-right spooky. As I was watching Quest for Camelot it struck me how all these animated movie heroines (Beauty and the Beast, Anastasia, Quest for Camelot, etc.) look and sound alike!

Hans Zaepfel, age 39
I recommend this movie to everyone! Not only was it nicely animated but the songs were teriffic!!!… Yes,it did have magic in it and intense scenes but, it wasn’t scary enough or intense enough to frighten my 7 year old sister. The bottom line is this is a GREAT movie!!!…

Bethany Kitts, age 11
“all three [kids] enjoyed it”…
I took my kids, ages 9, 8 and 6 years-old to the movie. All three enjoyed it, and my two youngest get scared fairly easily. All three laughed and paid attention throughout the movie. I think an important point to make is that this is a “non-Disney” movie and that is one reason I quickly went out to support it. I consider the difference noticeable but it can also be related to their cinematic styles of animation. It was high quality. I highly recommend the film.

I think the film review was rather unfairly severe. After all, what stories about Camelot does not include Merlin “the magician,” talk about sorcery (such as the enchanted sword in the stone) and would not include sword fights?