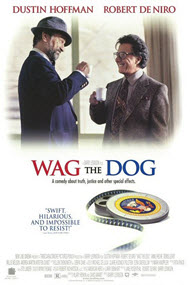 “The simpleton believes everything,
but the shrewd man measures his steps.”
Proverbs 14:15

“Of course there’s a war. I saw it on TV.”
Robert De Niro in

“Wag The Dog” is a fictitious story of White House spin doctors concocting a fake war to boost the president’s approval rating and divert attention away from scandal. It’s a great opening premise, but Barry Levinson’s direction and David Mamet’s screenplay hammer away at the same sarcasm and cynicism—until there’s nothing left but that same old sarcasm and cynicism.

In the wake of a generic (and unidentified) President’s misconduct with a minor, crackerjack politico Conrad Brean (Robert De Niro) is brought in by a White House press agent (Anne Heche) for damage control. The two of them turn to a jaded Hollywood producer (Dustin Hoffman) for help; together, they literally “produce” a war in Albania and accompanying PR campaign. And, like magic, the president’s approval ratings skyrocket.

From an artistic standpoint, “Wag The Dog” is vastly superior to the similarly-themed, utterly patronizing “Mad City” (which also starred Dustin Hoffman) from a few months ago, yet it stil leaves much to be desired. One major problem, besides the extensive profanity: We never see the general public’s reaction or supposed gullibility in any scenes, not even crowds in the streets watching TV. Virtually every scene features DeNiro or Hoffman, and subsequently, there’s no evidence for the audience that their spin-doctoring is even working. “Wag The Dog” feels incomplete.

Did the president ever get re-elected? (That was, after all, the point of the fake war) I’m always skeptical of any movie that leaves the viewer with more questions than answers.

Regarding the political content, “Wag The Dog” is not at all suggestive of the current White House administration. That is a very erroneous assumption. There are none-too-subtle references—few complimentary—to Iran/Contra and Granada, the Gulf War and yellow ribbons. Many viewers, if not offended by the frequent profanity, will be offended by what this movie has to say about the Reagan-Bush era.

“Wag The Dog”, incidentally, finished principal photography in 29 days, compared to two or three months for standard product. All the profanity (and it’s mild) and fake war footage, though, was left intact. I wonder what this would have looked like had it been more fully developed beyond 29 days.

An audience will be sorely disappointed if they see this movie to follow a plot. …If a person looks only on this level, the movie is a waste of money, but that is not what it is about. It is about the media and how much power it has in our lives: we believe it because we saw it in a movie or on TV. This is one of the most important movies of our time, and will sadly be missed by many due to the rating and the profanity throughout. Although mild, there are quite a few of them. If, however, we view it with different eyes, we will come away with an awareness at how we need to look critically at what goes on around us.

As a director, actor, and writer, I can say with some authority that this is a movie not to be missed. Parents, watch it with your children and discuss it. Every film has a meaning as well as a plot—find it and talk about it. The acting is incredible, very good performances by the entire cast. Clean (with the exception of the profanities), with more twists than you can stand (the last half drags a bit). On the whole, it is a great movie and desperately important.

Chan Pedersen, age 24
Recent events may make some people curious enough to rent this movie on video. Be forewarned—it is a waste of your time and money. You already know the premise, the rest of the plot is a waste of time. There are only a few characters and all they do is sit around bragging about how smart and cynical they are, and, by extention, how dumb and gullible all the rest of us are.

Lee Russell, age 52
“Wag the Dog” is disturbing in terms of excessive language, but still is a must see for discerning Christians. I disagree with the reviewer who states “Wag the Dog” is not at all suggestive of the current administration. [Even though this review was written before current scandals regarding President Clinton] …I think [the reviewer] might want to rethink that in light of recent events. I think this film is amazingly timely and realistic and strongly points at the current administration. Sometimes evil Hollywood gives away some truth. Just imagine what the real Albania will be to divert our attention. This film shows you just how gullible people are “of course there’s a war—I saw it on TV.”