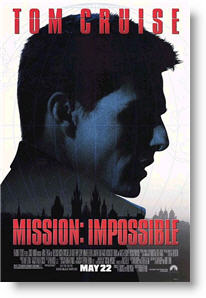 Danger, adventure, excitement, intrigue—“Mission Impossible” has it all, without the excessive sex and violence.

Tom Cruise stars as Ethan Hunt, a member of an elite CIA intelligence task force. He is given orders to work with his Mission Impossible team to trap a man in Prague who is attempting to steal the extremely sensitive list of all the secret undercover agents in Eastern Europe. If this information gets into the wrong hands, the CIA may have to terminate all of those agents.

As the mission unfolds, however, we find that it was really a set-up designed to eradicate each of those CIA team members, including Hunt, in order to stop a dangerous intelligence leak that is believed to be within Hunt’s team. Because Ethan is the only agent that is believed to have survived the phony operation, he becomes the number one suspect. In order to prove his innocence and not be eradicated, he teams up with other outlawed CIA operatives to steal the computer disk containing a list of all the CIA undercover agents in the world from a highly-guarded military installation in Virginia.

After obtaining the disk, Hunt uses it as bait, employing technology and the Bible, to find the true perpetrator who goes by the code name of “Job”.

This fast-paced and edge-of-your-seat excitement film unfortunately contains some foul language and violence. The technology featured in this film, specifically the Internet, will seem quite antiquated and somewhat unrealistic to present-day computer users. The filmmakers also intentionally mislead the audience on more than one occasion in order to keep them guessing. The story does, however, cast the Bible in a favorable light as Hunt becomes a student of the Bible, using the book of Job to track down the bad guys.

First of all, the Bible was VERY briefly used in the movie. Ethan saw the scripture in the Bible and quickly put it to the side and you never saw a Bible again until Ethan noticed the name of the Hotel Jim Phelps was staying in inside the cover of the Gideon Bible. In fact, the first thing Ethan said after reading the scripture would have been considered foul by most Christians.

Now, About the technology being “antiquated”. You never see any of the gadgets used in this movie. The video camera glasses, the alarm systems, the tracking device placed on William Dunloe (the CIA executive), even the laser beam sensors covering the overhead vent. If the technology got any better in this movie, it would have to come from the U.S Military!

Make no mistake, this movie was great. I agree with the reviewer that it didn’t have to rely on excessive sex and violence to tell its story, but at the same time, there was not a heavy Bible representation.