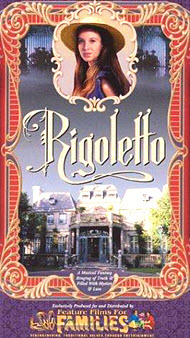 This movie was produced specifically for Feature Films For Families, an organization dedicated to providing wholesome films for viewing by the entire family without having to worry about the profanity, sexual content, or graphic violence that is so common, even in “family films” of today.

This heartwarming story, set in the Depression-era, is kind of a cross between “Beauty and the Beast” and “The Man Without a Face”, but with biblical themes. This well-done movie has beautiful original music and exceptional singing.

In “Rigoletto”, a mysterious, wealthy man has moved into the old mansion on the hill. The new resident, Ari Ribaldi (Joseph Paur), has a disfigured face and is reclusive. The people of Castle Gate are suspicious of him, but when 13-yr-old Bonnie Nelson (Ivey Lloyd) goes to work at the mansion, she discovers that he is a gifted singer, songwriter, and teacher of vocal music. She eventually persuades him to teach her to sing, and as he does, Bonnie sees inner beauty beneath his crusty exterior and her friendship changes his angry demeanor. One by one, the other children in the town also befriend Ribaldi and learn not to judge a person by his appearance.

When strange, unexplainable things begin happening in Castle Gate, rumors begin to circulate that Ribaldi is somehow responsible. The townspeople’s distrust grows into prejudice, and when something terrible happens they see how they have wrongly treated Ribaldi.

I highly recommend this movie because it contains many Christian elements, such as: friendship, love, acceptance, honesty, trust, respect, and virtue. Church is mentioned as a place without fear; a place of inspiration. People who have done wrong are confronted, and getting revenge when one is wronged is rebuked.

The age recommendations are based on the occurrence of several themes. “Rigoletto” is a story about prejudice, which may not be understood by children under 9 years old. Some people make hurtful comments to others, and there are angry outbursts by Ribaldi that might upset younger children. There is one scene when a crowd of people are destructive and violent (not graphic). The only “bad” language is 2 uses of the word “dang.” An “evil spell” is briefly mentioned by a character reading a storybook. Also, a song lyric mentions the phrase “love within myself,” which might be interpreted as humanistic, but I don’t think it was intended that way. I’m sure most would agree that the “negative” points mentioned above pale in comparison to what we are subjected to by Hollywood! A very refreshing change!!

Parents will find helpful questions for discussing the content of the movie on the back of the video box.

Positive—“Rigoletto” is a magical story that takes a fairy tale’s plot and drops it into the lap of a small town in America. It is the story of Rigoletto, an elf engaged to a beautiful princess in the land of make-believe. On the night before his wedding, he is struck in the face by a magic sword and cursed to live among the mortals. The spell can only be broken by someone with a pure heart who will love him in spite of his disfigured face.

So the movie begins with Rigoletto, now the mysterious Mr. Ribaldi, moving into the old mansion on the outskirts of the impoverished Castle Gate. Young Bonnie goes to work in Mr. Ribaldi’s home to save her family from eviction. She is told by Mr. Ribaldi’s personal assistant never to disturb the reclusive Mr. Ribaldi who spends his days in the drawing room. When Bonnie hears a beautiful female voice singing in the drawing room, Bonnie, herself an aspiring singer, is drawn by her curiosity into the forbidden room. There she has her first encounter with her employer, a man who, at first glance, has a heart even uglier than his face.

Never one to judge by appearances, Bonnie continues to work for Mr. Ribaldi, who is a skilled voice instructor. The employee becomes a student, and eventually a friend.

…This story has a lot of potential, but the script isn’t strong enough to do it justice. The actors try their best to make the magic work, but they can’t quite pull it off. Particularly difficult to portray are the too-good-to-be-believed Bonnie and the mercurial Mr. Ribaldi who is at once both tender-hearted and bitter. The plot twists and turns, and twisted in with it are some beautiful musical numbers, which are the highlight of the movie. Some of the plot twists don’t quite make sense, which leaves the movie a little disjointed. The climax of the movie juxtaposes the most beautiful musical number of the show with a rather disturbing scene of violence. I found myself wanting to savor the music, but the bitter taste of the violence interspersed with the music made it a difficult repast. It was an uncomfortable contrast that underscored the theme of the movie.

As in all fairy tales, they all live happily ever after, but I found myself a little sad when Mr. Ribaldi and Bonnie are forced to part company. The story, even with all of its weaknesses, finishes on a strong note. I found that I really cared about Bonnie, Mr. Ribaldi and the people of Castle Gate. I guess the magic really did work after all.

Would I let my kids see this movie? No. But only because we haven’t introduced them to fairy tales yet. I want them solidly grounded in the truth before I expose them to fantasy. I wouldn’t recommend this movie for children too young to differentiate between truth and fantasy, or who would find the one violent scene unsettling. For older children, it would be an enjoyable evening of entertainment. Adults will appreciate the music in the movie, but will find the story development weak. My Ratings: [4½/3]