Satellite view of Israel’s Hula Valley. Notice Lake Hula within the Agamon Hula Tourism Park, the Hahula Preservation area and the Jordan River. In biblical times and even into the 1800s, the Jordan River ran through the much larger lake of the waters of Merom in this fertile valley.

Battle of the waters of Merom

This area was the scene of the third and last great victory gained by Joshua over the Canaanites. It took place after the Exodus and the 40 years of wandering in the wilderness. According to God’s plan, the rebellious generation of the Exodus and Moses first died, then the Israelites invaded their Promised Land, led by Joshua. After the miraculous events of the initial invasion, which defeated the idolatrous inhabitants of Jericho, Ai, etc., many other kings quickly banded together to mount an enormous combined attack to annihilate the Israelites as they camped at Gilgal.

And it came to pass, when Jabin king of Hazor heard these things, that he sent to Jobab king of Madon, to the king of Shimron, to the king of Achshaph, and to the kings who were from the north, in the mountains, in the plain south of Chinneroth, in the lowland, and in the heights of Dor on the west, to the Canaanites in the east and in the west, the Amorite, the Hittite, the Perizzite, the Jebusite in the mountains, and the Hivite below Hermon in the land of Mizpah.

So they went out, they and all their armies with them, as many people as the sand that is on the seashore in multitude, with very many horses and chariots. And when all these kings had met together, they came and camped together by the waters of Merom to fight against Israel.

But the Lord said to Joshua,

“Do not be afraid because of them, for tomorrow about this time I will deliver all of them slain before Israel. You shall hamstring their horses and burn their chariots with fire.”

So Joshua and all the people of war with him came against them suddenly by the waters of Merom, and they attacked them. —Joshua 11:1-7 NKJV

Merom and its waters are not mentioned again in Scripture. 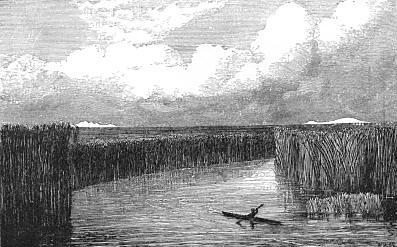 1800s drawing of the mouth of the Jordan River at the lake (Source: Samuel Manning, Those Holy Fields: Palestine, 1874)

Victorian adventurer John MacGregor explored the area with his canoe, the Rob Roy. He was the first, in modern times, to sail on its waters. It was then surrounded by a morass, which was thickly covered with canes and papyrus reeds, which were almost impenetrable. The lake was then triangular in form, about 4½ miles in length by 3½ at its greatest breadth. Its surface was 7 feet above that of the Mediterranean.

“The Ard el-Huleh, the center of which the lake occupies, is a nearly level plain of 16 miles in length from north to south, and its breadth from east to west is from 7 to 8 miles. On the west it is walled in by the steep and lofty range of the hills of Kedesh-Naphtali; on the east it is bounded by the lower and more gradually ascending slopes of Bashan; on the north it is shut in by a line of hills hummocky and irregular in shape and of no great height, and stretching across from the mountains of Naphtali to the roots of Mount Hermon, which towers up at the northeastern angle of the plain to a height of 10,000 feet. At its southern extremity the plain is similarly traversed by elevated and broken ground, through which, by deep and narrow clefts, the Jordan, after passing through Lake Huleh [Hula], makes its rapid descent to the Sea of Galilee.”

In modern times, the area is known as one of the world’s best for bird-watching, and includes the Agamon Hula Tourism Park.