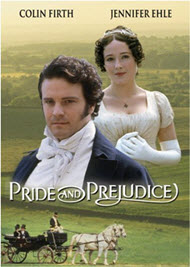 This BBC film for television is intended for those who like period drama entertainment. The film is based on the book of the same name by Jane Austen (1815) and is the third attempt of filming the book (1995), with the leading roles of Elizabeth Bennet taken by Jennifer Ehle and that of Mr. Darcy by Colin Firth.

This version, produced by Sue Birtwistle, is also the definitive version. The cast of this 4 hour film is absolutely superb and could not be better. Even if period drama is not your main interest, you will find yourself rapidly drawn into this story: the arrival of the very wealthy Mr. Darcy causes enormous excitement in the Bennet family. Spirited daughter Elizabeth judges him on first impressions and on the malicious gossip of friends, and rejects his advances. In the midst of the romance of her older sister and the later elopement of her youngest sister with the Mr. Wickham, she finds herself again in Darcy’s company. Gradually her opinions of the proud young man begin to change. This famous romance runs its bumby course amid a host of delightful characters and the background of grand English stately homes and beautiful countryside and music. The pride and the prejudice of most of the characters are shown up throughout the film, often in a very humorous way.

Although Elizabeth’s youngest sister runs away with wicked Mr. Wickham, the film shows nothing offensive to Christians and the immorality of Lydia’s elopement with Mr. Wickham is properly addressed.

The costumes are excellent. The visual settings and music is an absolute delight as well. The film follows the book very closely. Withouth a doubt the best period drama I have ever seen.

In a time where it is difficult for committed Christians to find high quality entertainment, this film is sure to delight. The video might be difficuly to get hold of. It is produced by BBC Worldwide Ltd. [Make sure to get the correct version, which is the one with the cast and producer as mentioned above and filmed in 1995.]

This is one of the few movies I find completely satisfying. It follows perfectly with the book, and thankfully doesn’t leave anything out (like so many Jane Austen adaptations). My sisters and I make a habit of watching it when we get together for Christmas. There is so much to love about this movie if you don’t mind the length. The acting and scenery are so superb, you will find yourself absorbed completely in the movie by the third hour. Just remember, the ending is well worth the wait. My Ratings: [5/5]

Ali S., age 22
I Love This Movie! I have seen it three times. I plan to watch it again and again. Maybe once a year. I love the recent Jane Austen movies. This was my favorite. Jennifer Ehle (as Elizabeth Bennett) and Colin Firth (as Mr. Darcey) are fabulous! I want to buy it and have it as part of our library. Hopefully, my girls will fall in love with the characters, that were so beautifully developed, as I did. My Ratings: [5/5]

Sheila, age 34
Absolutely fabulous! The first time I saw this piece, I at first thought I would be bored and tire easily within the first few minutes. I loved every minute! Each character is very well portrayted, and made real to the audience by the actor. I’ve seen it countless times, and still enjoy the long film. From someone who read the book and loved it, this is an excellent adaptation. It’s worth it, at least once. My Ratings: [5/5]

Sam, age 16
Jane Austen’s wit and charm adapted beautifully to the screen. I’ve never seen a movie stick so faithfully to the book it’s based on, and the result is the exciting, elegant and at times hillarious picture it is. Extremely clean. Cleaner than some G rated cartoons I’ve seen. Thanks is given to God for the blessings received, and the youngest Bennet girl running off and living unmarried with the villain is horribly frowned upon, and treated like the disgusting disgrace that it is. My Ratings: [5/4½]

Jamie Cartwright, age 16
We borrowed this set of six videos from a friend, watched them twice in three days (Hey, we were on vacation!), came home and within four weeks had withdrawls, so rented them from the public library. Finally bought the set and the book. We love the language, costumes and especially the manners of the period. The main characters have a great deal of love, respect and loyalty for their family despite their faults, which are many. This is a romantic comedy, and it is hilarious at times. It is extremely well cast. Suitable for young viewers who are willing to overcome the period’s difficult language. My Ratings: [4½/5]

Donna Smith, age 40
“Pride and Prejudice” is a movie of high moral and moviemaking quality. It is wonderful! As a Christian, and a lover of (clean) period drama, this movie touched my soul. I think this movie gives many good, Christian values. Lydia’s immorality is given proper disapproval. In the romance part, the man makes the move. This movie advocates kindness and moral behavior. The Bennetts are seen to attend church (a definite plus). This movie also encourages getting to know a person before you marry them, and it encourages love based on the PERSON, not on the person’s appearance. Purity before marriage is encouraged, as the only physical contact between Elizabeth and Darcy is a kiss immediately following their marriage. I would recommend this movie for any Christian! It is also very funny, too! My Ratings: [5/5]