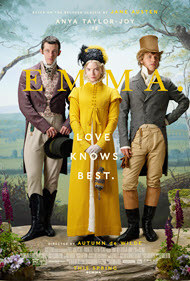 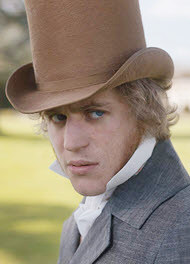 Life in the nineteenth century

A young woman who greatly overestimates her own matchmaking abilities

What does the Bible say about HUMILITY and pride?

Issues of social status and age

Allowing one’s misperceptions and imagination to lead one astray

Relationships among people from a small number of families 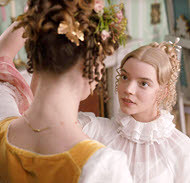 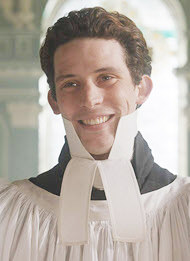 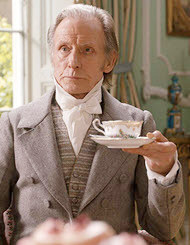 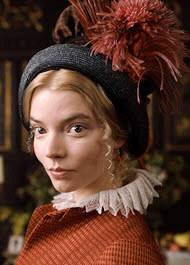 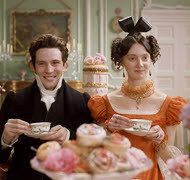 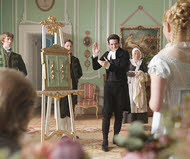 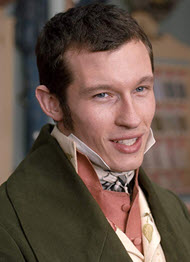 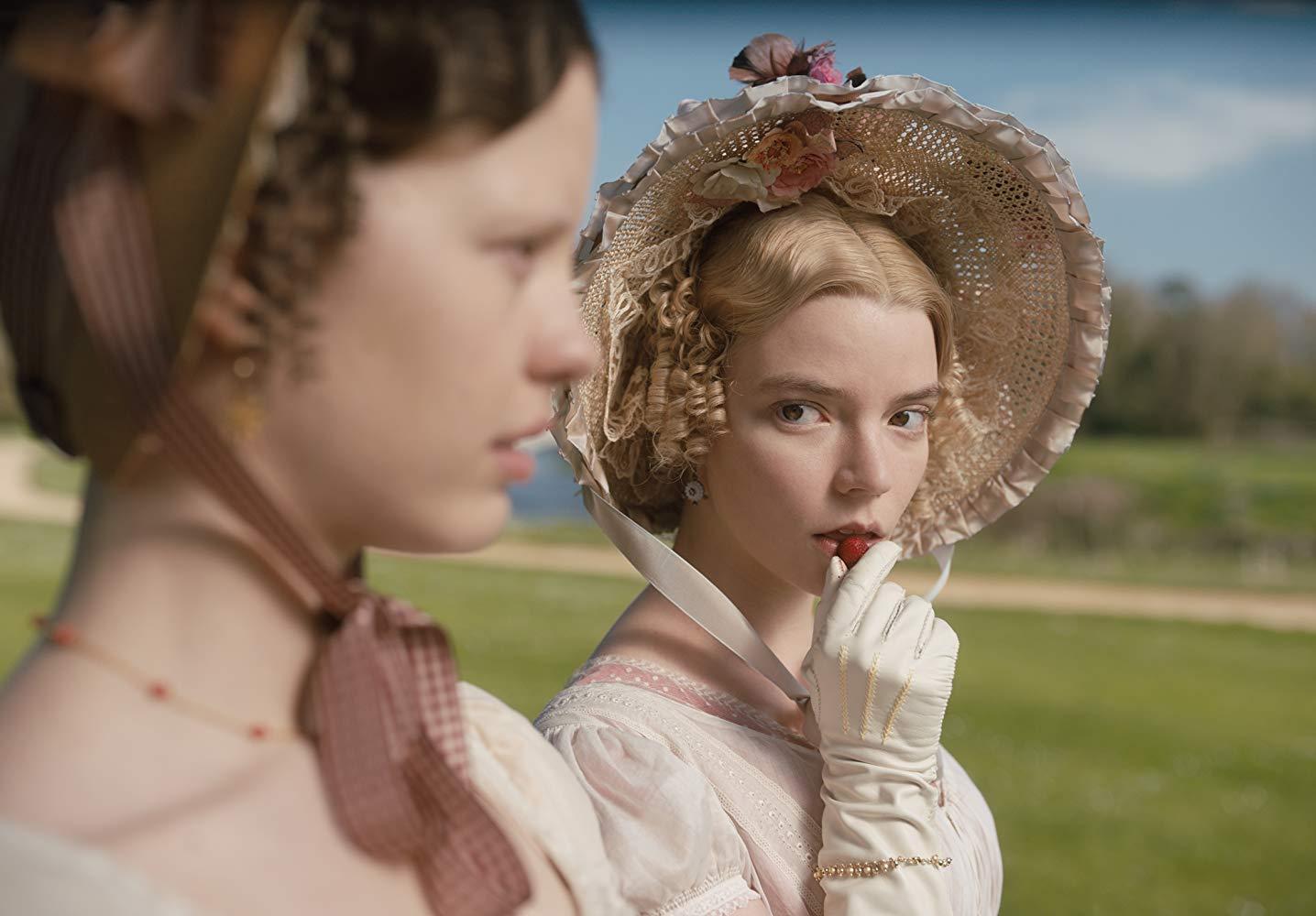 Autumn de Wilde’s film adaptation of Jane Austin’s 1815 novel Emma opens with the same lines that the novel begins with:

“Emma Woodhouse, handsome, clever, and rich, with a comfortable home and happy disposition, seemed to unite some of the best blessings of existence; and had lived nearly twenty one years with very little to distress or vex her.”

That sentence, besides being one of the best opening lines of any book or movie, is as concise and exquisite a definition of a brat as one is ever likely to find. Emma Woodhouse is, indeed, spoiled and selfish, but her self-assurance, fueled as much by self-delusion as by keen intelligence, is tempered by reserves of innocence and good will that make her as alluring as she is aggravating. Like Natasha in War and Peace, Scarlett in “Gone With the Wind,” or Holly in “Breakfast at Tiffany’s,” her self-absorption, and her confidence that those around her will behave as willing chess pieces to be moved about on her own board of life, make her a formidable opponent, and a prized conquest.

Emma (Anya Taylor-Joy) lives with her widowed father on a wealthy estate. Her governess, Miss Taylor (Gemma Whelan), has just married Mr. Weston (Rupert Graves), and to Emma’s and Mr. Woodhouse’s chagrin, Miss Taylor will be moving out of their manor.

Emma consoles herself by taking credit for introducing the newlyweds, and now believes she has a talent for matchmaking. She wastes no time applying her new trade, most notably with a friend, Harriet Smith (Mia Goth), who was born of lesser circumstances than Miss Woodhouse, but has a good marriage prospect in the respectful, if not rich, and gentlemanly, if not gentry, Robert Martin (Connor Swindells). Emma’s attempts at raising Harriet’s status by pairing her first with Mr. Elton (Josh O'Connor), the town vicar, and then with Frank Churchill (Callum Turner), the errant son of Mr. Weston, prove wayward and wasteful, more hot messes than cozy pairings.

Emma’s taste for meddling, fueled by pride and made dangerous by an inability to take note of danger signs, wreaks havoc in the lives around her. The only moral compass in her life is George Knightley (Johnny Flynn), her neighbor and brother-in-law, who incessantly chastises Emma, imploring her to use prudence, temperance and a bit of common sense in order to better navigate the treacherous waters she is trying to steer her friends, and herself, through.

The arguments between Emma and Mr. Knightley make the novel sparkle with wit, danger and passion. He is as buttoned-up as she is flighty—as much a stick in the mud as she is a will of the wisp. They are a tea-sipping, parlor-room Punch and Judy, attentively seated at their battle stations and dressed for serious warfare: he in tailored waistcoat and high necked collar, she in V-necked day dresses with delicate flower inlay. They go at each other with such gusto that you look forward to the next round, and yearn for it never to end. But, alas, it does.

Johnny Flynn, a capable actor and a proficient Mr. Knightley, is too young and too uncombed to fit the stately, almost fatherly character he is meant to portray, and having him appear naked early on detracts from the essence of what he represents. The storytellers, in their attempt to update this latest in a long line of film and television adaptations of the novel, perhaps feel a need to “dress down” their leading man in an effort to make him more modern or more human, but being groomed and dressed by a servant is not modern, and revealing one’s backside is not revealing of anything essential to the character, or to the truth that the character is meant to represent.

Anya Taylor-Joy, so splendid in Robert Egger’s 2015 film, “The Witch,” is charming, and quite funny in some scenes, but she often loses her focus, which may be the fault of the film’s director, a music-video maker prior to this, her first feature film. A comedy of manners, encased in enchantment but propelled by calamity and near-farce, should proceed with delicacy and forthrightness. It should not bounce down stairs, as Mr. Woodhouse so incongruously does, or run across fields and down hallways as many of the characters senselessly do.

All the actors, even Bill Nighy, the most experienced of the lot, but a surprisingly annoying, and even weird, Mr. Woodhouse, seem lost and in frantic pursuit of something. DeWilde never gives them the time or the guidance to find that something. She pushes her actors from one escapade to another as if they were playing a game of musical chairs instead of a chamber piece.

The only impressive performance is given by Miranda Hart as the garrulous Miss Bates. She is, in equal measures, absurd and endearing, an unstoppable cackler that you would want to run a mile from if you weren’t consumed with the desire to put an arm around her.

And speaking of music, the soundtrack to “Emma.” has to be one of the most intrusive in recent memory. There is everything from choral pieces to symphonic interludes to folk ballads; even “The Last Rose of Summer” is thrown in; none of it has the bewitching charm of the Rachel Portman’s 1996 Oscar winning score of Douglas McGrath’s version of “Emma” starring Gwyneth Paltrow. The music in the deWilde version is as disconnected, and discordant, as the action itself.

The sets and the costumes are marked by a similar pomposity. For the most part, I liked the lush costumes, but I cannot get a particular scene out of my mind, the one in which Emma has what looks like a tiny round Christmas ornament hanging from her head. That still confounds and bothers me. The interiors, which boast walls with colors such as canary yellow, robin’s egg blue and Provencal lavender, look as though they were not so much painted as layered with fondant.

“Emma” is a delight on the page, and on screen it can work as a tenderhearted confection as well as a morality play about the dangers of tampering in others people’s affairs, about placing our own wills above the will of God, and in failing to listen to the one Voice that matters above all others. This energized and au currant version may fit today’s fashion, but it does not forge a style, one evocative of Jane Austen’s time, or emblematic of our own.

“Yet they did not obey or incline their ear, but followed the counsels and the dictates of their evil hearts, and went backwards, and not forwards.” —Jeremiah 7:23-24 ESVUK

“Guard your steps when you go to the house of God. Go near to listen rather than to offer the sacrifice of fools, who do not know that they do wrong. Do not be quick with your mouth, do not be hasty in your heart to utter anything before God. God is in heaven and you are on earth, so let your words be few.” —Eccl 5:1-2 NIV

Neutral
Neutral—I’m a huge Jane Austen fan and so have seen most of the movie renditions of her works. I’m giving this film a neutral review because, although there were some good moments, I have to say that overall I didn’t really care for it.

First of all, Johnny Flynn was superb in his portrayal of Mr. Knightly and had a good balance of being severe, but not too severe and was realistic in his presentation. Anya Taylor-Joy was also very good as Emma.

The other portrayals were just so-so to me. I came away wondering if the actors were really British, as the accents seemed a bit mixed, and if you look into the backgrounds of some of the actors you will see why. Even Flynn grew up in South Africa, although I understand he has one parent who is British, and he did the best job in this area among the actors.

My main issue was with the poorly written screen play. The rear nudity at the beginning was so unnecessary. What was the point of that?!! It really started the film off on a cheap note. So many details were missing, such as the depth of how Mr. Knightly and Emma were connected as childhood friends and how their siblings were married to each other, the relationship between Emma and Frank Churchill and how this affected Jane Fairfax, and even the part about Mr. Elton.

If you haven’t seen other renditions you will be lost on the connections between characters. Also, the main romantic climax was ruined by an insertion of silly cheap humour.

There was no vulgarity or swearing typical with Focus Feature presentations, but they tried to make a classic story with humourous moments into a comedy, which is like trying to force a square peg into a round hole.

Positives were the Christian hymns in the background with Jesus” name mentioned.

My favourite Emma is the 1996 BBC TV movie with Mark Strong and Kate Beckinsale and the brilliant Raymond Coulthard as Frank Churchill, which is in the same league as the “Pride and Prejudice” mini-series. If you are a purist and like well done period-piece dramas I’d encourage you to see that one and make sure you find the wide-screen version which was released a couple of years ago. There is nothing like a truly British presentation with integrity and respect for the original story and period piece that they are doing!

Sadly this 2020 version is not one of them.
My Ratings: Moral rating: Average / Moviemaking quality: 2½