for strong horror violence and language. 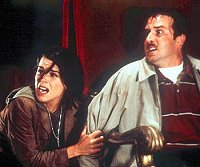 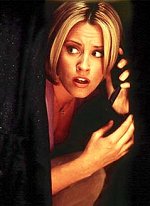 Sydney Prescott (Neve Campbell) is being stalked once again by another serial killer, but her character doesn’t become an active participant in the story until late in the movie. The focus is more on mixed-matched couple Dewey and Gail (real life married couple Courtney Cox Arquette and David Arquette) who meet up with each other on the set of a movie detailing the murders that surrounded Sydney in the last two films in this series. Dewey is a bodyguard to Jennifer (Parker Posey), a neurotic actress who provides much of the comic relief.

As usual, everyone is either a suspect or potential victim, but in this everything-but-the-kitchen-sink plot, the red herrings have become too familiar and the cleverness that was apparent in the first “Scream” has grown thin.

There are some nice homages paid to the horror movie genre. Legendary horror director/producer Roger Corman appears in an early scene as a studio executive. One ill-fated character makes a reference to Hitchcock’s “Vertigo” when they really mean “Psycho”. The killer takes out a victim then looks them over just like Michael Myers did to his victims in the “Halloween” movie series. Unfortunately, the plot, which involves another secret concerning Sydney’s murdered mom, leads to a conclusion that uses a plot device that’s been done in too many movies in the past.

While there is talk of sex, no one actually indulges. Several characters are shown drinking, and foul language is in abundance, including taking the Lord’s name in vain. The gore is not as bad as in the prior movies (“Scream” or “Scream 2”), but the violence is still high. Recommended only for fans of this series.

An offensive and dull excuse for a three-quel. Face it, the second “Scream” was the worst, but this one’s a close runner-up; one character who died last time is conveniently resurrected rather pointlessly, too many new characters that just get in the way, a contrived, illogical ending that comes out of nowhere for the pure sake of coming out of nowhere. The first “Scream” was a thrilling and original masterpiece of its genre, but it should have quit while it was ahead. My Ratings: [2/1½]
Lambort, age 32
This movie, to me was VERY thrilling, and suspenseful. It had a great ending and though there was a lot of gore, the swearing was not even recognizable. I am a pastor’s wife, and I have very strong beliefs, but I don’t think people should be offended by this movie… I don’t recommend it for kids, but teens who know their faith and are strong in it should be allowed to at least view it once. Going in large groups helps also. Responsible and trustworthy teens are the best to send to these movies… but, in my opinion, it was GREAT!
Sarah Holden, age 31
This movie was a great movie if you like these type of movies. Although there was some bad language and killing there is absoulty no sex in this movie. This movie isn’t much different then the other 2. I think that if you have seen the first 2 movies and liked them you will surely like this one. Although the plot is similar to the first 2 the way the story goes in this one will keep you jumpy the whole time. Personally I didn’t think it was that bad of a movie and enjoyed it very much. My Ratings: [3/3]
Michael Daniels, age 39
While there are no redeeming qualities about this movie (it’s not a Christian movie, and it’s all about killing people so there’s nothing redeeming about that), I found this film very funny and surprising. I thought it was, at the very least, equal to the caliber of the first “Scream” and definitely better than “Scream 2.” A little clarification on one of the facts the reviewer mentioned: Dewey is NOT a bodyguard for Parker Posey’s character. He is somewhat of a “technical advisor” for “Stab 3” (the movie within the movie) and he is dating Parker Posey’s character in the movie.

This movie was a great ending to the trilogy and only true “Scream” fans will appreciate it. I’ve already seen it twice. It was very disturbing, however, to see people bringing in their tiny babies and children under the age of 10 or so. I wouldn’t recommend this one even for teens and wouldn’t really “recommend” it period because there is a lot of killing and a LOT of f-words and other bad language. If you’re a “Scream” fan then these things are nothing new and you’ll probably like it. My Ratings: [1/5]
Sherry, age 31
Comments from young people
I was not very up to seeing this film at first, but I gave in (one of the problems I have with movies) and went to see this movie with my 14 year old brother. I found it to be a very boring movie with no plot to it. It gave up the bad guy to easily. This is a movie I don’t recommend and if you have to get a peek, don’t bring the children. This movie was awful. My Ratings: [1½/2½]
Kenneth, age 17
OK, I’ve been a follower of the “Scream” series since the beginning. We all know that the first was the best, right? Right. [If not then God help you]. I saw “Scream 3” the week after it came out. I thought it was very good. Not great! But good. It was worse than the first, but better than the second. And, just to stick up for my man, Randy, one of my favorite parts in the entire movie is when he’s on the video telling “The Rules of a Trilogy.” It was funny! This movie is certainly the cleanest of the three. No sex, less gore, less language. And it doesn’t say that killing is okay. That’s the big thing. All of these people know that killing other people for sport isn’t okay. So spare me the “This is gonna make kids go psycho” argument. If you like the first two, you’ll at least appreciate this one. My Ratings: [2½/3½]
Jason Eaken, age 16
Well, I must admit I’ve been a bit of a follower of the SCREAM movies. I really enjoyed the first one, the second well that left a little to be desired… As for the plot I thought it was great, what I great way to end such a successful TRILOGY of the HORROR genre. I really enjoyed this film. My Ratings: [3½/3½]
Jeremy, age 17
I saw this movie the night it came out. I think this was one of the worst movies I’ve ever seen, and I don’t know why I stayed in there for the whole thing; I should of walked out! The plot, the language, the whole story was very unbelievable and not worth even showing! If you’re a Christian and considering going to watch this, don’t—it’s a waste of time and will not help your faith in what you believe, and if you’re not a Christian I suggest you think twice about this movie too… My Ratings: [1½/2]
Rachelle, age 16
This movie is truly awful—a horror movie that doesn’t scare served up with a helping of comedy that’s not funny. In fact, the only funny thing about this movie is the plot. It’s contrived and unbelievable. The characters talk about how they need to stay together, only to separate at the worst possible times. I found myself chuckling at some of the stupidity. (And that’s rare… I’ve always been a sucker for this genre.) Do yourself a favor: stay home. My Ratings: [2/1]
Andrew Hager, age 18
I thought this movie was suspenseful, yet it would not be appropriate for a Christian viewer. The plot was good, probably the best of all the “Screams,” so far. The film wasn’t as scary as the others, but it did have a rather important message, though it may have been hard to see through all the gore. The movie has some very strong language (at one point, the f-word is said three times in less than 30 seconds). There was no sex and very little inuendos, the best out of the “Screams” thus far. My Ratings: [2½/3]
Darren, age 14