for strong violence, language and nudity 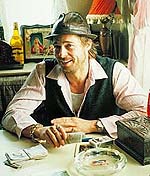 “Snatch” is the latest gritty crime caper film full of action, drama, and comedy from British film-maker Guy Ritchie. From a moral standpoint, there honestly isn’t anything particularly redeeming about this movie. The violence is graphic and gruesome, the language is almost always explicit, and the humor is often low-brow. There is some female nudity during a violent confrontation in a topless bar for a few seconds. Some of the characters delight in violence while the rest would rather not use any unless they felt it was absolutely necessary. About the only decent thing a character does in this film is apologize to another character for a death in the family and saying “God bless her.”

Franky Four Fingers (Del Toro) is a Jewish thief who steals an 84 karat diamond. Cousin Avi (Farina) is a Jewish-American businessman who wants it. Boris the Blade, or Boris the Bullet Dodger (Serbedzija) is a Russian gun dealer who wants to steal the diamond for his brother. Turkish (Statham) and Tommy (Graham) are illegal boxing promoters who get into trouble because of rogue Irish gypsy bare-knuckle boxer Mickey O’Neil (Pitt). Those three end up owing the ruthless Bricktop (Ford) big time, a vicious old man who fixes illegal fights. Bullet Tooth Tony is a big guy hired to track down the diamond’s wandering where-abouts. And then, there’s this crazy gypsy dog! All of these guys end up running into each other at one point or another, making things a huge mess. Hopefully, this plot summary can be followed despite an extremely complex story.

In regards to the artistic value of the film, I wanted to give “Snatch” a higher rating than I did. The direction is tight as the film moves at an interesting, steady pace. Ritchie knows when to lay back and show restraint and also when to energize the film by using crazy, stylish visuals whenever tedium threatened. The cast is extremely talented and overall delivers solid performances, despite some minor over-acting and Del Toro’s questionable Jewish accent. Brad Pitt’s performance stands out the most, especially with his entertainingly semi-comprehenisible Irish gypsy accent. The script impressively handles a complicated plot full of intricate details of how the actions of each character somehow affect everyone else in the story. The dialogue is very Tarrantino-esque in nature—clever, intelligent, humorous, but also loaded with slang and curse words. And watching the gypsy dog steal scenes is priceless.

My main problem with the film artistically is its obvious awareness of its own hipness and cleverness. Guy Ritchie just goes out of his way to prove to the audience how cool and slick his film is supposed to be, and I found this to be very distracting, making the movie less charming and engaging.

Still, “Snatch” is a pretty good movie with its own unique feel and distinctive look and style. If you don’t mind trendy criminal films that reek of hipness and drenched in curse words (Kids-in-Mind reports about 145 F-words and several religious profanities) and violence (“gruesome” according to Preview), then you’ll find “Snatch” to be an entertaining experience. However, please consider the heavy objectionable material before making your final decision.

Negative
Negative—I was let down by this movie because it had so much good and yet too much bad. There was an offensive crude comment made towards the Virgin Mary, a robber criticizes the Bible saying, “Just because it’s written doesn’t mean it’s so,” a scene it a topless bar, gangsters playing with cards adorned with nude women, vulgar jokes, extreme violence, a ton of cussing, drunkenness, and smoking all add to my disapproval. Despite a good plot, this movie didn’t snatch my okay. I hugely enjoyed this movie. Of course, yes, there were many, many instances of swearing. I’m not defending that.

However, I didn’t think that “Snatch” was as offensive as, say, “Good Will Hunting,” or “Pulp Fiction.” Most of the humor is British-style, which had a few of my friends scratching their heads. However, there were a couple of times during the film that I laughed so hard that I cried. Most of the killing violence is actually off-screen. You see the killer shooting, and you see a little bit of the aftermath, but you almost never see the bullets hit. Actually, the most violent parts have to do with Brad Pitt’s boxing matches. The camera work was incredible, and I was really impressed by the shifts between scenes. Also, watch for the dog. No, don’t take kids to see this.
My Ratings: [Very Offensive / 4]
Spark, age 22
Comments from young people
Positive—This movie had GREAT cinematography and acting, and I thought it was well portrayed. Although others may view this as objectionable, I thought it was a very good production.
My Ratings: [Average / 4]
Kris, age 16
Positive—…two scenes which include [nudity] and the nudity is seen for a grand total of about seven seconds. …“Snatch” was absolutely fantastic. Both the plot and the characters were very interesting. Brad Pitt was wonderful in a supporting role. I would’ve liked to have seen more of Benicio Del Toro’s character. However, the characters story line is ended half way into the film. But that’s okay. Jason Statham was great as the amusing protagonist, Turkish, and there was a scene with three black guys in a car, with a dog, that was no doubt one of the funniest things I’ve seen in a while. They were hysterical. Vinnie Jones, who was in “Lock, Stock…” was also great.

I really like Guy Ritchie’s style of movies. Mostly “Snatch” deals with people who get caught up in downright bizarre circumstances and with all the wrong people. it’s kind of about how once you make one mistake, it’s hard not to make another mistake trying to get out of the last one. Turkish says near the end, “You know, we’re a lot worse off now than we were when we started.” This is a wonderful film. It does have quite a bit of language [criminals, go figure] and the spot of nudity. And, those who don’t appreciate violence in movies may want to stear clear…
My Ratings: [Average / 5]
Jason Eaken, age 17
Movie Critics
…Every character in the film is involved in some way, shape, or form in a seedy, underhanded, or illegal enterprise…
Michael Elliot, Movie Parables
…too many uninteresting and therefore unnecessary characters and dialogue which now seems plain cheesy…
Ben Falk, BBC Online
…The only socially redeeming quality of the movie (and this is a reach) would be to illustrate the logical conclusion of a humanistic worldview where there is no ultimate judgment and human life has no value…
Dr. Ted Baehr, Movieguide