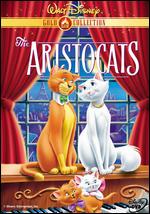 This is the first animated feature released by Disney after the death of “Uncle Walt.” Set in Paris in 1910 and with cats as the central characters, it has elements of “Lady and the Tramp” and “101 Dalmatians” and features a multinational “hep-cat” beatnik jazz band and hippie-style lighting effects during the songs. Although some of the characters and visual techniques seem dated, the basic story is timeless.

When rich Madame Adelaide Bonfamille drafts a will leaving her fortune to her cats (Duchess and her three kittens Berlioz, Toulouse and Marie) and making Egdar the Butler the contingent beneficiary, the jealous Edgar decides that the cats should get lost. First he drugs them with sleeping pills and dumps them in the country. After they find their way back with the help of some alley cats and several other animal friends, Edgar tries to ship them to Timbuktu. Of course, Edgar’s greed is eventually punished and everything ends as it should.

Content: Besides the dastardly Edgar, there’s a drunken goose “Uncle Waldo” whose character is played for laughs. Other than that, this is a simple, straightforward story of Duchess and her kittens overcoming hardship and getting back to their beloved owner.

My opinion: This film isn’t equal to the very best of the Disney animated features, but still quite good.