for intense action violence and some sexual material 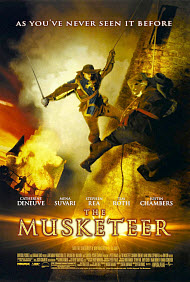 “The Musketeer” may not take your imagination back to the seventeenth century, but it took me back to an earlier day in filmmaking. I have observed, watched, and studied films since I was four year old and I can remember using my allowance to order 8mm versions of classic silent films from Blackhawk Films. The old Chapter Serials were among my favorites. In those days adults and children would go to the local cinema week after week to watch their favorite stories unfold. Each chapter would end with a cliff-hanger.

During the 1930s and 40s, studios conducted “reel” wars, constantly working to outdo each other. There were always bigger stunts, more action, greater suspense, and even more impossible situations for the heroes to overcome. Republic Pictures produced my favorites from the thrill factory. What great fun!

that’s what “The Musketeer” is mostly—just fun. The added stunts by well-known Hong Kong director Xin Xin Xoing (“Double Team”, “Once Upon a Time in China”) doesn’t hurt. it’s your basic check-your-brain-at-the-door flic. But for today’s dino and space-crazed audience, this film may not have as strong of an appeal as it once did (perhaps proven by the poor showing for the recent B-western “American Outlaws” which left the theater after only two weeks).

“The Musketeer” is loosely based on the story “The Three Musketeers” by Alexandre Dumas. If you’ve read Dumas’ story first, your appreciation for “The Musketeer” will be great. But since time is of the essence these days, you’ll just have to take in Peter Hyams’ (“Timecop”, “End of Days”) creative spin.

Our story begins with D’Antagnan (Justin Chambers) as the young son of a wounded Musketeer. it’s 17th-Century France and the threat of war with the Spaniards is on the horizon. Young D’Antagnan witnesses the murder of his mother and father (a common plot point to qualify you as a hero) by the hand of evil Febre (Tim Roth). Tim always plays the role of the villain (recently “Planet of the Apes”) with a convincing disdain. Young D’Anatagna is taken in by his father’s mentor Treville (Michael Byrne). There’s the typical feel-good exchange between the two (witnessed in other films like “Karate Kid”).

The Musketeers, originally an elite group created to defend King Louis XIII (Daniel Mesguich), currently find themselves in disgrace during this difficult period for France. The Queen (Catherine Deneuve) is suspected of manipulating our weak king while the Cardinal Richelieu (Stephen Rea) is waiting for his opportunity to steal the power of the throne. It is the perfect atmosphere for political conflict, and bloodthirsty Febre is all too eager to be used as the Cardinal’s puppet.

D’Antagan longs to be a Musketeer and wants to help restore their honor and avenge his parent’s death. He is joined by Aramis (Nick Moran), Porthos (Steve Spears), and Athos (Jan Gregor Kremp) (Yep, you guessed it—three Musketeers). D’Antagan has his work cut out for him as he tries to enlist their unwillingness. Our hero does meet up with a heroin, Francesca (Mena Suvari). She quickly becomes his love interest (it is after all a 104-minute film), and it doesn’t hurt that she is a friend of the Queen (it’s nice to have friends in high places). Francesca does become the brief target of the objectionable content in this film. These scenes include some voyeurism, an attempted rape by an uncle, and an encounter with D’Antagan (who is presumably unclothed).

The film earns its PG-13 rating with lots of swashbuckling and passing sexual content. It also contains some moments in taverns with lots of alcohol consumption (implying that these are depressed Musketeers). The movie is easy on the ears. Thank you, Mr. Quintano, for almost no profanity. Some of the characters make light of confession, repentance, and the role of the Cardinal (after all he is after the throne). The dialog is consistent within the context of the characters. I do recommend “The Musketeer” with the above notations. The PG-13 rating should be observed.

It’s not the best matinee offering, but it certainly is not the worst. You may want to rent an Errol Flynn or Douglas Fairbanks Jr. video instead. They certainly dueled with a lot of energy and an often-humorous tone. My personal favorite is the 1929 film “The Iron Mask”. You can watch Fairbanks (in one of his most memorable roles) trying to also restore the King of France.

This movie was quite possibly one of the most entertaining and cleanest movies I’ve seen all year. No swearing or bad scenes. Really this movie is a winner and will rock the box office as it is! A++
My Ratings: [Better than Average / 5]
Matt, age 21
Besides what’s been mentioned, I’d like to add that I enjoy period pieces where some effort has been made to create realistic costumes and sets. that’s a huge additional expense that producers dislike, which is one reason period pieces are the hardest genre to get greenlighted. This film, shot in Luxembourg to simulate a bygone France, DID make the effort, and I appreciate it. Also, Tim Roth is a thoroughly dislikable villain here (not his best work in that line but still credible). The swordfighting-rope climbing-tipping ladders finale (which looks like a smooth combination of choreographed stunts and CGI) is better than average.
My Ratings: [Average / 3]
Brett Willis, age 51
My family is always on the lookout for a decent movie without the constant barage of profanity, crudeness, and sex. For the most part this film delivers that. I could have done without the body part language in one scene and I didn’t need the “in awe” stare of the maiden toward the main character, but, otherwise, our eyes and ears were for the most part protected. I grow weary quickly of the silly fight choreography, give me good decent fight scenes that a normal human hero could perform, none of the flying garbage or spinning between beams. This was fair only and if you just want something to do on a rainy day and there is nothing else, this might be the ticket.
My Ratings: [Better than Average / 2½]
Danielle, age 48
Although this movie is without bad language and only has a few sensual references but no sex, it really wasn’t a good movie. I mean, it was… nice. But not fantastic or riveting or even interesting. The story is WAY OFF and shouldn’t really even be considered “musketeer.” The script was a roll-your-eyes type yawner. The acting was terribly so-so. The action, of which there was plenty, was violent and hyped. It just all didn’t mesh together correctly. Morally, not a bad movie. So going to see it wouldn’t be a TOTAL waste of time. I mean, it was better than “A Knight’s Tale”. But don’t expect much.
My Ratings: [Better than Average / 3]
Lori, age 27
The movie contains a lot of fast-paced, creative, highly entertaining sword fight scenes. The plot is decent. It has various deviations from the original “Three Musketeers” story, but the alterations create a good old fashion really-good-guy-verses-really-bad-guy (or in this case two bad guys) story. Unfortunately, like most action films, the dramatic element is seriously short-changed, which keeps it from being a really excellent movie. On the negative morality side, drunkenness is commonplace among the Musketeers in the film. Additionally, nude bodies occur on screen, but the vital components are gratefully blocked over or kept off-screen. There may be implied sex, but that is completely left to the imagination of the viewer. Notwithstanding, D’Artagnan is portrayed as a very noble character. Although he desires vengeance for his parents’ murder, he is not necessarily bent on revenge. He even rapidly turns his back on the exposed body of the young woman he’s fallen for…
My Ratings: [Better than Average / 3]
Deanna Marquart, age 30
I thought this movie was pretty good. The fight scenes were mostly believable and not at all graphic. I do not recall any swearing, and there was no nudity. The only thing that some might find objectionable is one of the bad guys was a priest.
My Ratings: [Better than Average / 4]
E. Johnson, age 28
Comments from young people
…boring [with] very poor acting! There were some scenes that, if they were not in it, would make the movie better. Although I loved the action scenes they were very well planned out and acted. There was NO offensive words in this movie or nudity. I would recommend this to people who like old fighting movies.
My Ratings: [Average / 1½]
Jullianne Hanger, age 17
This movie does have some scenes that you wouldn’t want children to see, but nothing is really shown. The worst thing that happens is a making out scene. That is the worst though. There is plenty of fighting, and the first scene is a little traumatic. But revenge is really not shown at all. There are some good values displayed in it. It is a sappy romantic movie, but deeper than a regal chic flick, like “The Wedding Planner”. I would recommend it, but not to any one under 13, who has the maturity of a 16 year old.
My Ratings: [Better than Average / 4]
Ray Goodman, age 16
Movie Critics
…Romantic worldview with some solid moral and Christian elements…
Dr. Ted Baehr, Movieguide
…Some non-explicit, sexually related dialogue… very brief/minor profanity and a boy sees his parents killed before him…
ScreenIt!
…proves that just because a director can make his actors fly with wires doesn’t necessarily mean that he should…
Marshall Fine, Rochester Democrat and Chronicle