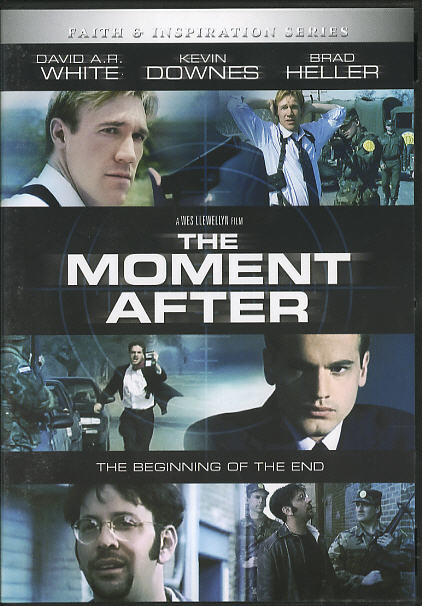 Two FBI Agents are called to investigate the disappearance of millions of people, while trying to find a man who could be a leader of a para-military group or the key to what had happened. Now, in case you are wondering, the agents in this case are not named Mulder and Scully and this is not another typical episode of the X-Files. On the contrary, the officers involved in this edge-of-your-seat suspense adventure are named Riley and Baker, and they have just been assigned to solve the mystery of the rapture in this end time thriller, “The Moment After”.

David A.R. White (“Mercy Streets,” “End Of the Harvest”) stars as Agent Adam Riley who feels that there is something more to this case than just millions of people vanishing. As he continues the investigation, he begins to learn more and more that this incident was foretold in Biblical prophecy. Kevin Downes (“End Of the Harvest”) plays Riley’s skeptical partner, Agent Charles Baker who believes that Riley is barking up the wrong tree and becomes more closed-hearted after his wife loses their first child. It isn’t until they meet this mysterious man named Jacob, (another “End Of the Harvest” star), Brad Heller, that David accepts the ultimate truth, which puts him against his former partner and an evil military leader, Lieutenant Fredricks (Monte Perlin).

With a slew of end time films to choose from, “The Moment After” is a fairly good movie that I would recommend. The story is pretty accurate to the series of events that take place during the tribulation period as told in Daniel and Revelation. Although the movie shows the seriousness and gravity of the situation, it seemed the level of intensity was inconsistent. There were little elements in certain scenes where I felt they did not keep up with that suspense flavor of the movie. Both White and Downes did quite well as the two federal agents, but the one person that really stood out was Brad Heller as Jacob. Heller’s performance was a blessing to see. His character personified what a true man of faith should be and you wanted what this character had, the confidence in our Savior.

All in all, “The Moment After” was a decent movie. Does it keep you at the edge of your seat? In most moments, it did, but in others, it lacked the action and intensity that goes into a real good suspense thriller. Is it a good evangelistic tool? You better believe it. It gives people a chance to see what happens if you accept Jesus’ love or reject it. The Moment After’s theme is clear. It is a matter of choice, and the choice, my friend, is up to you. On a grading scale, I give The Moment After a B+.

Positive
Positive—I found this movie very nice to watch. Teenagers, and pre-teenagers enjoyed it very much! Good script, good suspense, and good bible statements! Indeed. The only thing we (my life and I) did not like is, the French dubbing: very poor quality! Most of voices sounds do not match with the characters at all! Worse, some voices sound as a recorded tape witch goes too slowly, then, not so nice to hear and poor for convincing! What a pity! It highly affects a good product!
My Ratings: [Excellent! / 3]

David Bouton, age 34
Positive—This is probably the best End Time movie made to date. Although I enjoyed films like “Megiddo” and “Left Behind,” “The Moment After” completely blew me away. Made on a small budget and this is evident throughout the film, but I felt like it adds to the reality of the film. No Hollywood candy coating this film is a real gem in a void of quality Christian films. An excellent message throughout along with a brilliant storyline make this a must have for any follower or fan of the Christian film industry.
My Ratings: [Excellent! / 5]