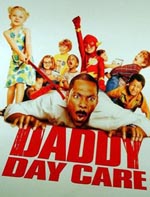 Here’s what the distributor says about their film: When a father (Murphy) loses his lucrative “dotcom” job, and finds himself in jeopardy of financial ruin, he joins his friends (Zahn, Garlin) in opening a free-spirited “guy-run” business called “Daddy Day Care” (in his house), much to the chagrin of the owner (Huston) of a more traditionally-operated rival center.

Positive—I went into this movie expecting to have already seen the funniest moments in the previews and/or commercials. I was pleasantly surprised otherwise. The movie was very funny yet still had a strong theme about the importance of family. I only noticed a fleeting use of profanity and would consider allowing my children to watch this movie.
My Ratings: [Better than Average / 4]

Angie Pena, age 35
Positive—I didn’t have any reviews available to get insight prior to going to see this movie and was pretty nervous given Murphy’s history. However, I was pleasantly surprised. Apart from some bathroom humor and a handful of marginal words, the general message was positive. At first, I thought it was going to be another “beat up on fathers” films, but they turned it around by the end of the movie and the message was “family is more important than jobs and materialism.” At one point, when Murphy is describing why he has to go back to work (to support their lifestyle), Ben, Murphy’s son, offers to sell all of his toys so his dad can continue to stay home with him. While mom does end up going back to work, it is not done in a way as to reduce Dad’s role as the head, but rather to show a family pulling together all its resources for the best.
My Ratings: [Better than Average / 3]

Tim Johnson, age 33
Neutral—I saw this movie today with my six-year-old and overall I felt it was an okay movie. One time (I believe) Eddie Murphy’s character said, “Oh God,” and I think the worst word used was “butthead.” While that’s not my favorite word in the world, it’s pretty tame compared to what’s out there. The movie had some pratfall humor, which my daughter thought was funny. She seemed to enjoy this movie, but I don’t think it was her favorite. If I had it to do over again, I would probably have waited until it came out on video, but overall I felt it was a decent movie.
My Ratings: [Better than Average / 2]

Lee, age 33
Positive—My husband and I took our two daughters, ages 4 and 7, to see this movie. There was one curse word in it (the “h” word) and there is a good bit of bathroom humor, which all of the children in the theater loved. There is a great storyline about putting family first, and I really appreciated that. Personally, I liked the movie and so did my husband and children.
My Ratings: [Better than Average / 3]

Tiffany, age 33
Positive—I went to this movie, honestly, expecting the worse with a group of friends. I have been burned a few times before with Eddie Murphy when I went to see Dr. Doolittle and Shrek. This time was different. Murphy seems to finally have come to an understanding that it is good to do family oriented films every now and then. There is one instance where Eddie Murphy used the “H” word. He does say “Oh my God” once. And the word butthead is used one time. Outside of those three things, and the fact that they seem to use Dr. Benjamin Spock as an example of the right method for child rearing, there is not anything else that I can find morally objectionable about the film. It is certainly better than anything else Eddie Murphy has ever been in. The production quality of the movie, of course, is certainly not up to the level of stuff Murphy has done in the past, but I am certainly willing to sacrifice that to see a clean movie. It kind of reminded me of the cheesy comedy films from the 80’s. You have Ms. Herodan sabotaging the big wing ding at the end and farm animals running all over the place. You have Cheap Trick in concert. You even have the out-takes and bloopers at the end during the credits. Overall, it was a pretty good movie. I would probably recommend going to see it at least once, or wait for it on DVD.
My Ratings: [Better than Average / 3]

Joseph Botwinick, age 31
Positive—I thought “Daddy Daycare” was great! There was nothing offensive. And it was a nice story. It is okay for any age. I cannot remember any bad thing in it. My daughter and her friends liked it a lot. The worst thing in Daddy Daycare was probaly somebody saying God’s name in vain. Or the woman in her pajamas. It was a great movie and fine for anybody. If you want to watch a comedy then watch Daddy Daycare. There was parenting in there like a man was taking care of all these kids…
My Ratings: [Good/5]

Stephanie Guardy, age 32
Movie Critics
…if you’re ready for a lighthearted comedy with a darling cast of cute kids, a funny buddy duo and great kid-friendly entertainment, then this is your movie… Since he’s had kids, Murphy has been more discerning, choosing family films and roles his kids can watch with him and we are all the richer for it!…

Holly McClure, Crosswalk
…Murphy is in kinder/gentler mode (with occasional outbursts of exaggeration) and delivers a generally agreeable performance. Even so, one can’t help but wish that the script tapped more of his expansive comedic reserve. Due to the flat storytelling approach and the “been there, seen that” resemblance to other films such as “Mr. Mom,” “Daddy Day Care” rates as just a 5 out of 10.