for violence and a substantial amount of strong language. 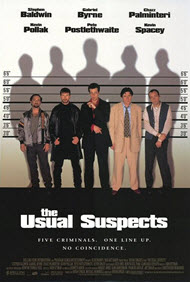 Not many mystery/thriller films measure up to this one. The entire lead cast is very good; the story is engaging throughout; you’ll know your head is being played with somehow, but you won’t guess the ending in advance. And when the truth of all that you’ve seen is finally revealed, it doesn’t require a lengthy explanation; you can quickly go back and mentally re-edit everything. Nice, tight writing.

The opening consists of selected brief clips from an attack (criminals against other criminals) on a large freight boat anchored in a harbor. Different versions of this sequence will be seen again later. The next day, U.S. Customs agent Dave Kujan (Chazz Palminteri, “Analyze This”) is brought in to question survivor Roger “Verbal” Kint (Kevin Spacey, “American Beauty”). Spacey’s Oscar-winning deadpan performance here is similar to his role in “Seven”, but more extensive. Kujan’s interest in the case is finding and identifying elusive international drug trafficer Keyser Soze. Kint and his partners-in-crime Dean Keaton (Gabriel Byrne, “Point of No Return”), Spencer McManus (Stephen Baldwin, “Mr. Murder”), Todd Hockney (Kevin Pollak, “The Whole Nine Yards”) and Fred Fenster (Benicio Del Toro, “Traffic”) were supposedly all hand-picked for the boat attack by Soze. Kujan would also dearly like to get something on Keaton, a former cop and the quintet’s de facto leader. He’s worried that Keaton may have faked his own death and gone into hiding. Anything more I say here might tip the story. I’ll just add that the supporting performances by Pete Postlethwaite (“The Lost World”) as Soze’s representative and Suzy Amis (“Titanic”) as Keaton’s girlfriend are also good.

Content Warnings: The language is extreme in the opening scenes, tapering off a little later on. There are many on-screen and implied killings. The central characters are amoral bottom-feeders who think murder is all in a day’s work. The only sexual content is a flashback narrative scene, done in fuzzy focus and stop-motion, in which a rival gang rapes Soze’s wife and then threatens to kill his wife and children. The ending of that scene is a psychological shocker and sets the tone of the film.