for sexual content, and some language and drug use 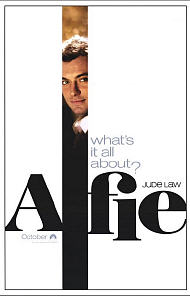 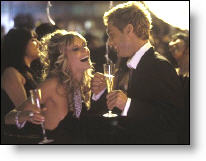 Here’s what the distributor says about their film: “A stylish reinvention of the 1960’s classic, “Alfie”, this film is a humorous, sexy and often touching tale of a philosophical womanizer (Jude Law) who is forced to question his seemingly carefree existence.”

The sadness of Alfie’s life is that it’s not really a life. He lives alone, using and mistreating women and himself, and is driven solely by selfishness. The story carries a lot of lightheartedness, but also doesn’t fail to show some consequences from Alfie’s actions. It is a bit of a morality tale where Aflie reaps what he sows.

A remake of the 1960’s film starring Michael Kane, this new Alfie is still a British bloke, but instead of London, resides in Manhattan where he lives his gigolo lifestyle. Sweet-talking himself in and out of women’s lives is Alfie’s specialty, while he fully admits that he intends to sleep with them. Furthermore, after he attains his goal, he finds reasons to not commit to them, leaving them hurt while he moves on to the next pretty face. Eventually his actions catch up with him and he discovers that he has not been getting the better end of the deal after all.

Sex is an enormous part of the subject matter for this film. Close to the beginning there is an implicit scene with Alfie having sex with a lady in the back of a limo. There are several other sex scenes, but they are more implied. One does involve Alfie with two girls, whom we see kissing each other at least twice. And in another scene, although it is not a sexual encounter, involves showing one of Alfie’s live-in girlfriends topless while walking around his apartment.

There is a lot of humor mixed into this story, but it is tempered quite heavily with more serious subject matters as premarital sex, single parenting, unplanned pregnancy, extramarital affairs, broken relationships, and some drug use. The foul language is very minor, but does include one instance of the f-word. Alfie also exclaims “Jesus” under his breath a couple times when hearing bad news.

It is interesting that this film doesn’t let Alfie get of scott-free with his loose lifestyle. There is a moment where he thinks he may have a disease, which in turn causes him to want to change his ways. But he doesn’t seem to really do that. He is panged, however, by the upsets he faces after having broken everyone else’s heart. There is a time when he reflects on what he has done, but it doesn’t seem to offer very much. Instead it raises more questions rather than answering any.

After visiting the doctor, Alfie is concerned about his life and admits that he has been thinking about God and death a lot. He says, “If what they told me in Bible classes was true, then I’m in big trouble.” But then he blows all of this off because he has found out his physical condition is okay. He gets close to realizing he needs to repent and turn from his ways, but doesn’t seem to take it too seriously.

Jude Law gives a superb performance. It is easy to like him with his charm and persona, even though we know he is acting so despicably at times. He rarely shows any truly likeable characteristics, though, and the key moment when I really felt for him was when he was finally broken.

The film is well made and well acted, with a few appearances by Susan Sarandon. Their relationship was supposed to be the big sting for Alfie, but it tended to come across like any of his other flings. But Sarandon is sharp, as always. Overall, an interesting slice of a life, but Alfie doesn’t seem to learn or teach us too much.

Neutral—I had misgivings about seeing Alfie, but after viewing it last week, I’m glad I went. Alfie’s life is a broken, tangled web of one-night stands and meaningless sexual encounters. The movie itself didn’t glorify his escapades; on the contrary it showed his life to be what it really was—empty. His synopsis of his life (at the end of the movie) is what hit home with me. He readily admitted to having “things” but no peace of mind. How vain and shallow his existence had become. It reminded me that without God as the center of our lives, we too are nothing more than empty vessels. This movie will not appeal to everyone; I found the intimate scenes brief and more suggested than graphic.
My Ratings: [Average/4]

Reba, age 30+
Negative—This movie is very offensive. It has a lot of sexual content and offensive language. Alfie goes around sleeping with any girl he sees; one of the girls is his best friend’s girlfriend. Then she gets pregnant, and he takes her to have an abortion. Some of the girls he has sex with are married. In one scene Alfie and on of the girls are smoking marijuana. At the end, he realizes that he’s empty, and he wants to get in a serious relationship, but none of the girls would take him back. It reminded me of people who don’t have Jesus they are having fun at that time, but later they realize that they’re empty, and that no one else will be there for you but Jesus Christ. I do not recommend this movie…
My Ratings: [Very Offensive/2]

Sonia Duarte, age 19
Negative—I loved the music (especially the old Al Green stuff) and cinematography of this movie, definitely. And, yeah, the guy did get what he deserved in the end (a realization his life wasn’t as foot loose and fancy free as he’d thought and other people DID matter). But, I just COULD NOT get over all the drug use and over-the-top sexual content of this movie.

To its credit, I WILL say this: Movie or not, it DID prove the one point I’ve been trying to make for years—a point many of my girlfriends and female relatives hate for me to make—it takes two to tango. While the character, Alfie, was a self-centered, Casanova-wannabe jerk, he wouldn’t have had so many “victims” in the end if it weren’t for the fact the women in the movie were oh so willing to jump in the sack with him. (After all, it WAS Jude Law!) Seriously, as unfortunate as it is, the women of this movie are so much like women today… even in Christendom. People of both sexes and every race have all kinds of theories about love and how to find it, but ultimately, we all have to stop the finger-pointing and start taking responsibility for our OWN actions, especially when children are involved. (Marisa Tomei’s character, Julie, one of Alfie’s many conquests, is a single mom whose son, of course, becomes rather attached to Alfie-a horrifying reflection of the choices modern-day single moms make when it comes to whom they choose to let in their children’s lives …and just how many by the time the children reach maturity …for the sake of “having a man.”) Point is, while my first inclination, as a woman, was to shout at the screen, “Bad, Bad, Alfie!,” after stepping back, I realized in order to be fair and honest, if I found HIS behavior less palatable, I had to give the women’s actions a thumbs down, too. (In fact, the only woman in the movie I could admire to some extent was Alfie’s boss’s wife, who, as the movie revealed, stood by her verbally abusive, inappreciative husband for many years before deciding she had had enough.)
My Ratings: [Extremely Offensive/4]

Vonetta, age 27
Movie Critics
…Is the Playboy Philosophy still worthy of this kind of scrutiny?…this is a remake without a reason… Alfie, get a life. Ah, but that’s not going to happen, is it?…

Kirk Honeycutt, The Hollywood Reporter
…Another ill-conceived remake… his endless blabbing to the camera… is just maddening…

Wesley Morris, Boston Globe
…easy on the eyes, but it lacks stamina… the power of the stronger scenes is fleeting…

Mike Clark, USA Today
…“Alfie” is a movie that most Christians will probably never see, and that is definitely the right decision…

Annabelle Robertson, Crosswalk
…Did Alfie need to pile on the sex and drugs in order to deliver that message? Nope…