for language and a scene of graphic violence 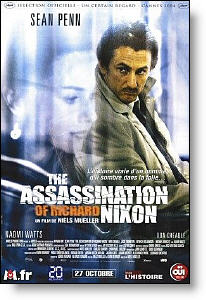 What should a Christian do when overwhelmed with depression? Answer

“The mad story of a true man.”

Here’s what the distributor says about their film: “Based on real life events, “Assassination” is set in 1974 and centers on a businessman (Penn) who decides to take extreme measures to achieve his American dream.”

There are more than five billion grains of sand on the Earth, but the least of these could destroy them all. At least that is what Sean Penn’s (“21 Grams,” “Mystic River”) character Samuel Bicke believes. It is his dream to produce something from his otherwise meaningless life. My dream is to be entertained by movies, not be depressed by them. In the end, neither Samuel Bicke or myself was successful in fulfilling these dreams.

“The Assassination of Richard Nixon” has little to do with assassinations or Richard Nixon. The movie is a study of the character of a failure. What does failure produce in the minds of some of these grains of sands on the Earth? Bitterness? Contempt? Helplessness? Desperation? Hopelessness? All of the above. In real life, we have sadly seen it all too often. Disaffected loners, attempting to make a name for themselves by altering history, creating terror, acting with cowardice.

Such is the case with Penn’s character. Each frame sees him spiraling down further and further, self-destructing faster than I can eat my popcorn. Given the role, Penn does an admirable job of recreating a person for which we have no sympathy and no compassion. Samuel Bicke is a cautionary tale. And in a sense, the movie is as well. Sometimes interesting events do not make for compelling entertainment. Oh, the acting is good. I especially like Jack Thompson’s (“Star Wars: Episode II—Attack of the Clones”) portrayal of Samuel Bicke’s boss. Thompson is a furniture salesman extraordinaire. He has given Samuel Bicke a job after his own brother fired him from the family tire sales business. He attempts to mentor Samuel and teach the tricks of the sales trade. But Samuel despises the world of sales. He believes that one should be able to make a living without lying. This seems to be the extent of his morality, however.

Samuel Bicke’s life is crashing down all around him. He can’t keep a job. He hates his job. His wife (Naomi Watts) is divorcing him, and he has aspirations of starting a small business with his friend Bonny (Don Cheadle—“Hotel Rwanda”), which have no chance of succeeding. Every where Samuel looks is failure and evidence that society is all working against him. In his mind, Richard Nixon becomes the flash point for his anger, and the scapegoat for his failures.

Cheadle’s talent is somewhat wasted in this minor part, as is Naomi Watts. They are both very good actors, but there isn’t a great deal of material for them to work with here. Every scene of the movie contains Penn, and he is the focus of each of the slow paced misadventures. It’s a movie that just kind of beats you down with depression. I can do without that.

Samuel Bicke decides to tell his story to Maestro Leonard Bernstein through a series of recorded narrations. He hopes that after he has done his great act, Leonard will tell Samuel’s story. Supposedly the screenplay is inspired by or based on real events. For me this visit to 1974 reminded me of how glad I am we no longer live in the 70s and how glad I am that I am not a salesman. I would be lying to you if I said this movie was a bargain at $8.50.

The movie contains nine different profanities used some 20 times, including the taking of the Lord’s name in vain a half a dozen times or more. There was no sexuality or nudity, but several scenes of bloody violence. I also felt a few subtle political jabs thrown at Nixon, as well as maybe some even more subtle jabs at our current president. With Penn’s history of far left political leanings, it doesn’t surprise me these appear.

Movie Critics
…Because there’s no discernible point to The Assassination of Richard Nixon, no sense of larger purpose, the film has only craft and technique to recommend it…

Manohla Dargis, New York Times
…doesn’t have a lot of resonance or glow of originality… Penn is mesmerizing: a consummate movie actor at the peak of his game…

William Arnold, Seattle Post-Intelligencer
…Does the film have a message? I don’t think it wants one. It is about the journey of a man going mad… a character study…

Roger Ebert, Chicago Sun-Times
…familiar territory for movies and Bicke’s story isn’t all that extraordinary, or even interesting …Sean Penn turns in a fine performance as a man who has failed at everything in life…