for language, sexuality, some violence and drug use. 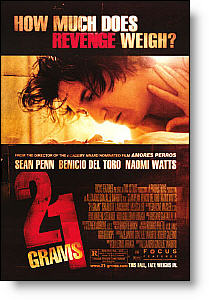 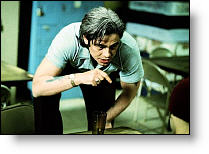 Have questions about life before birth, or a woman’s choice about pregnancy and abortion? Visit this beautiful online presentation. Ask questions; get reliable answers.
Suicide attempt by hanging

“How much does guilt weigh?”

Here’s what the distributor says about their film: “It is a story of hope and humanity, of resilience and survival. Whether you fear death or not, it comes, and at that moment your body becomes twenty-one grams lighter. Is it a person’s soul that constitutes those twenty-one grams? Is that weight carried by those who survive us?

‘21 Grams,’ written by Guillermo Arriaga (Amores Perros), explores the emotionally and physically charged existences of three people over a period of several months. An accident unexpectedly throws their lives and destinies together, in a story that will take them to the heights of love, the depths of revenge, and the promise of redemption.

College professor Paul Rivers (Sean Penn) and his wife Mary (Charlotte Gainsbourg) find their union precariously balanced between life and death. He is mortally ill and awaiting a heart transplant, while she hopes to become pregnant with his child through artificial insemination. Cristina Peck (Naomi Watts), having matured since her reckless past, is a beloved older sister to Claudia (Clea DuVall), a good wife to Michael (Danny Huston) and loving mother to two little girls. Her family radiates hope and joy. Much farther down the socioeconomic scale, ex-con Jack Jordan (Benicio Del Toro) and his wife Marianne (Melissa Leo) struggle to provide for their two children while Jack reaffirms his commitment to religion.

A tragic accident that claims several lives places these couples in each other’s orbit. In the aftermath, Paul confronts his own mortality, Cristina takes action to come to terms with her present and perhaps her future, and Jack’s faith is put to the test. If spiritual equilibrium is to be regained by any one of them, it could come at great cost to the others. Yet the will to live, and the instinct to reach out to another person for support, remains ever-present among them all.”

A strong Christian theme runs through 21 GRAMS, however it’s pretty clear that the artistic force behind this theme is unaware of an authentic relationship with Jesus. There are many depictions of religion and religious people, but the film as a whole painfully lacks any understanding of a world with a loving Savior, and it’s too bad because to a believing Christian viewer, 21 GRAMS will feel empty despite its skillful acting and brilliant direction.

I felt this message was deliberate—that there is no God, or hope, and that our lives are subject only to random acts of fate which turn mostly on the intervention of other individuals. 21 GRAMS is not so much violent as it is relentlessly sad and hopeless. The cinematography and score are brilliant, but the viewer is left to be relentlessly drawn into a world of dark interiors, strip mall ugliness, stark landscapes, filthy bar bathrooms and cellblocks and the like. Even scenes of children playing in a living room or on a sidewalk carry a dark foreboding.

The plot of the film centers on a human heart which is transplanted into a morally failing academic played by Sean Penn, who remains one of a small core of serious actors working today. Director Alejandro González Iñárritu uses a cutting-edge style which has events occurring in rapidly-cut, seemingly random time sequences. It can be a chore to follow at first, but there’s a method in his seeming madness and film’s story soon begins to unfold.

There’s no point in giving the plot away. Essentially a single tragic event unites the film’s three main characters: Paul Rivers, played by Penn, suburban housewife Cristina Peck played by Naomi Watts, and ex-con Jack Jordan (Benicio Del Toro). It is the depiction of Jack Jordan that Christians will find troublesome. An ex-con—mostly in and out of prison on minor charges—Jordan is a husband and father of 2 who is attending an inner city mission church. The one scene where everyone is singing works OK, but the pastor is played as being foul-mouthed, legalistic and unloving, as is Jordan. Clearly there is no light from the goodness of the Gospels here.

Judging from all the hypocrisy in the church, why would I want to be a Christian?—Answer

The director and screenwriter Guillermo Arriaga no doubt are seeking authenticity, but sadly the film casts the church as essentially irrelevant and hypocritical. I don’t think these depictions are mean-spirited as much as they are lacking in knowledge of a believing Church. Jack Jordan, for example, is portrayed as a sinner who is sincere about trying to live as a Christian, despite his failures.

There’s graphic sex and plenty of violence, although I couldn’t say any of it was gratuitous in the Hollywood sense. There is a faint attempt at the theme of redemption and forgiveness, but it’s so overshadowed by the general misery of the film’s story and characters that it pretty much fails to make it past the sea of anger, shame, failure and sadness.

One wonders, why was this film made? The human misery is relentless. There is little to recommend except as an exercise for film school students. The direction, cinematography and acting were all brilliant—but 21 GRAMS lacks soul at all levels.

Why is the world the way it is (filled with oppression, suffering, death and cruelty)? If God is all-knowing, all-powerful, and all-loving, would he really create a world like this?—Answer

Positive
Positive—Wow, what a heavy movie. The acting in this movie is really top notch. I personally think that Sean Penn should of gotten an Oscar for his role in this one instead of Mystic River. This movie is not for people who like happy endings. Lots of language and some sex. The director of this film also did another wonderful film called “Amerros Perros.” Both amazing movies.
My Ratings: [Average/4½]

Scott, age 26
Positive—“21 Grams” is a grim movie. Death, despair, and fear exemplify some of the movie’s themes. Watch this movie once, and you may be disheartened. There is no apparent redemption. There are no obvious heroes. Every character is deeply flawed. Look deeply, though, and you will find love, forgiveness, and hope. It is very subtle, but clearly and poignantly presented. This movie only presents very brief insight to each character. The quick, staccato-like editing, for me, emphasizes this point. Consequently, such qualities are presented in a very life-like manner. This is not a Hollywood movie! Rather, “21 Grams” presents how tender and dear… and hard to find… love, hope, and forgiveness truly are.
My Ratings: Moral rating: Offensive / Moviemaking quality: 4

Bob Barnshaw, age 50 (USA)
Neutral
Neutral—I enjoyed watching this film. I saw it twice, and I’m glad I did because it gave me a better perspective of it. I felt sorry for the ex-con’s character. He had the answer but was struggling with so much doubt and guilt that he couldn’t see it. I think this is something that most Christians would struggle with in that situation. Jack, the ex-con, seemed to be a fairly new Christian, but his pastor was of very little help and came off as judgmental, unsympathetic, and lacking in knowledge of God’s word. I wish the film had ended on a redemptive note thru God rather than thru man.
My Ratings: [Very Offensive/4]

Mary Draughon, Preview Family Movie and TV Review
…long on mood and moodiness, but at a loss as how to break any interesting human ground…

Wesley Morris, Boston Globe
…This is an accomplished and effective film, despite my reservations…

Roger Ebert, Chicago Sun-Times
…It is as ugly as it is beautiful, as full of peaks as of lows…