for some violence including domestic abuse, and language 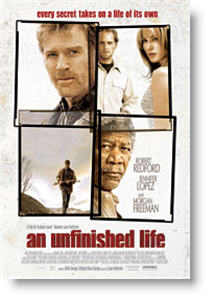 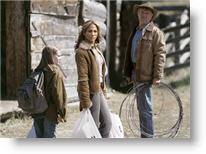 What should a Christian do if overwhelmed with depression?Answer

Are there biblical examples of depression and how to deal with it?Answer

“Every secret takes on a life of its own”

“An Unfinished Life” begins with Jean Gilkyson (Jennifer Lopez) living in a physically abusive relationship. She escapes the situation with her daughter, Griff (Becca Gardner). Their car breaks down irreparably and with funds running low, Jean turns to the only place she can—her father-in-law, Einer Gilkyson (Robert Redford). Jean had been involved in a car accident that killed her husband (Einers son) ten years before, and he was never able to forgive her for that.

Einer has other problems to deal with as well, taking care of his best friend and previously hired-hand. Mitch (Morgan Freeman) was involved in a grizzly bear attack that left him painfully crippled and in need of constant help.

When Jean and her daughter show up, sparks begin to fly. Griff, however, shows her need learn to know the grandfather she never knew she had, and Mitch refuses to let his friend hide from those he should care about.

With its theme of forgiveness, good acting, and beautiful scenic views, this movie could have been one of the years greatest. Unfortunately, it contains many foul words, sexual innuendos, anti-Christian statements, and other negative elements.

The f-word is used within 30 seconds of the opening credits, setting the stage for 60 cuss words to follow. God’s name is misused in several different ways that account for 20 of these—13 of them precede the word d***. There are also statements that encourage anti-Christian sentiment. One of these is when Einer tells Griff that she has to be kind to all visitors at his house, “unless its some guy lookin to sell his version of God,” he says.

The clothing styles are reasonably modest, but there is one scene of implied sex. Sheriff Crane (Josh Lucas) drives Jean to a gravel pit where we hear sounds giving the impression that they are having sex, but the car is viewed from a long distance. Another time, Mitch talks about a dream he had, and implies thinking about oral sex.

There are half a dozen scenes that include violence or threats. Most of these are involve protecting someone. And while no one is ever shot, guns are fired or held in two scenes.

In contrast to the negatives, the theme of forgiveness is presented so well its hard to imagine why all the harmful elements were included. The consequences of the lack of forgiveness are shown through Einer—as he becomes lonely, isolated and bitter. As he learns to forgive, Einer is able to enjoy a relationship with his daughter-in-law and granddaughter, as well as everyone else. A couple of times, this bonding is so intense that you may need a handkerchief or Kleenex.

Another positive principle in the movie is the need to speak the truth in love. The love part of this was stretched a little thin a couple of times. Generally, however, “An Unfinished Life” teaches that we are to tell those we care about the truths they need to hear. And we are to do it because we love them. Mitch repeatedly explains to Einer the attitudes needed to be changed in his life. He is stubborn about it at times, but it is always for Einers good.

If you can get past the language, you may find “An Unfinished Life” very moving. The actors and crew did an excellent job of creating a story with a good message; one that not only may make you laugh, cry, but leave you awed at the beautiful scenery in which the film is set.

Positive—This is a beautiful film on the healing power of forgiveness. It’s gorgeously shot, has a wonderful ensemble cast, and it also boasts an intelligent, witty script. I can’t recommend it highly enough. My mom said it was the best movie she’s ever seen. It is amazing. “An Unfinished Life” and “Hotel Rwanda” are my top 2 for 2005. Be warned, however, it’s gritty: there’s lots of language, one sex scene, and some violence. It’s gritty and real, but redemptive. How refreshing in a world where Hollywood just wants to shove gritty, real, and devoid of any morals or values whatsoever down our throats. Go see it!
My Ratings: Offensive/5

Todd Patrick, age 32
Positive—I think this is an excellent movie. It is a domestic drama that is fortunately set against a panorama of beautiful Western mountains and valleys. It is a gritty story with characters who do not know God (as is true of our world reality, after all). I consider the morality to be average because the content did not focus gratuitously on adultery (although there was a scene of implicit sexual activity) nor did it focus gratuitously on profanity, since the cursing arose from bitterness of character, which was a central theme of this movie. Morgan Freeman and Robert Redford are at their best. There is also a charming young actress, Becca Gardner, who plays Redford’s granddaughter. This is a solidly written and well-crafted, well-directed film that will probably garner some award nominations.
My Ratings: Average/5

Halyna Barannik, age 59
Movie Critics
…director Lasse Hallstrm’s undeniable skill is at work here, all of the performances are pitch-perfect, the scenery is breathtaking, and the values espoused are honest and good. …

E!Online
…At times, the movie recalls Kent Haruf’s novel Plainsong in its ability to find poetry in minute, everyday activities…

Pittsburgh Tribune-Review, Ed Blank
…about family and forgiveness. Not exactly new themes, but they’re delivered by two of our best actors, men who’ve earned our affection and respect for years…