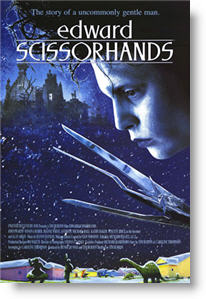 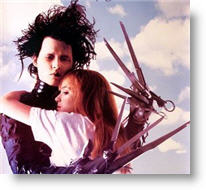 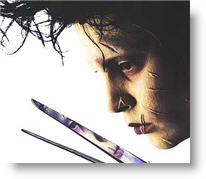 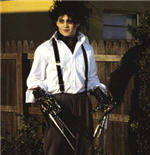 Evaluating a person based on their external appearance instead of their actual character, goodness and love

The sin of spreading gossip and rumors

“The story of an uncommonly gentleman. Innocence is what he knows. Beauty is what he sees.”

With such movies as “The Nightmare Before Christmas”, “Big Fish”, and the upcoming “Charlie and the Chocolate Factory”, director Tim Burton has never failed to amaze (or disgust) audiences everywhere with his inventive worlds and creative characters. Edward Scissorhands is no exception whatsoever. Set in the picture perfect city of Suburbia, the movie follows the story of lonely Edward (Johnny Depp), a man created by the best scientist in the world but left uncompleted when the scientist dies. Locked away in his mansion with nothing to do but trim bushes into figures with his scissor hands, Edward is suddenly rescued from his solitude by a desperate Avon saleswoman, Peg Boggs (Diane Wiest) and taken to stay with her family. There, Edward learns that the power of love in some people can overcome physical appearances, while in others, physical appearance merely causes fear and anger.

There are a lot of things to commend in this movie, especially the unconditional love and the basing of opinions about people on heart, not physical appearance. Edward is generally accepted by most of the Boggs family, but mostly seen as another household appliance, not a person. Peg comes close, but doesn’t fully understand his longing to be like everyone else. Only the Boggs daughter Kim (Winona Ryder) fully understands him and comes to love him as he respects her as a person, something her boyfriend Jim does not do. The film also discourages gossip, the spreading of rumors and the jumping to conclusions without gathering all the facts.

However, the film also gives the negative message that it’s okay to do something wrong (even if you know it’s wrong) for someone if you love that person.

Violence: There are several moments of violence, although most of it is not exceedingly graphic, just rather disturbing. The general appearance of Edward, with his scissor-like hands and pale condition, may frighten younger viewers before they understand his kind nature. Likewise, several scenes find Edward, angry at the world, using his scissors to wreck havoc on the neighborhood, during a slightly frightening scene. Elsewhere, Edward accidentally cuts a girl on the hand and a boy on the face with slightly bloody results. **SPOILERS** However, the most violent moment comes at the end where Jim ruthlessly beats Edward with a pipe and tries to shoot him. He roughly manhandles Kim, causing Edward to react in defense and stabbing Jim in the gut, with bloody results and death shortly thereafter.

Sex/nudity: one of Peg’s neighbors, Joyce, is very sexually aggressive and practically comes on to anything in pants. One scene finds her trying to seduce Edward, tearing off her clothes to show off cleavage-revealing but old fashioned lingerie. However, the scene ends before anything bad happens with Edward fleeing very much as Joseph did in the Bible.

Language: Of this, there is the least—most of it coming from Jim, with a few words and various milder profanities.

Spiritual content: Surprisingly, there is almost no spiritual content, but that which is present is not entirely encouraging. One neighbor seems to be the only Christian and a crucifix is seen hanging from her wall, however, she spends most of her time playing eerie music on a piano in a room filled with smoky candles and the rest of the time running around and warning people that Edward is the spawn of the Devil.

“Edward Scissorhands” is an incredibly inventive and an extremely well-made film. All of the actors, especially Depp and Ryder, shine in their roles, and at times the cinematography is indeed breathtaking. So, with some parental guidance in moments of violence and confusing messages, I feel that I can recommend this picture to discerning Christians who enjoy a quirky fantasy with several good messages thrown in.

Comments from young people
Positive—I just watched this movie for the first time on the recommendation of a friend, and I loved it. The plot, which sounded silly in explanation, in the film—worked. I mean, it was a silly story, but the acting was wonderful, the music fit well and the whole movie was filled with a… I don’t know. It made you care about the characters, and keep watching. I think it was very well-written. My only objections are the scene mentioned in the review, and a few words I wish hadn’t been included.

I loved the portrayal of Edward, he seemed so very innocent.

I think many positive messages can be inferred from this—one of he most obvious being not to judge by appearances. Also the effects of rumors and gossiping, the complications of ethics, and warnings against mob mentality.

How far would the people have gone if they weren’t “caught up in the moment” for example.

In conclusion, I know this is a fairly old movie (Is it 18 years now?) But if, like me, you were too young to see it before, or if you just haven’t seen it yet, I would recommend it for anyone 13 years old and up.
My Ratings: Moral rating: Average / Moviemaking quality: 4½

K., age 14
Positive—I thought that Edward Scissorhands was a very heart-clutching movie. I liked how Johnny Depp portrayed the dark, yet innocent Mr. Scissorhands and Winona Ryder as the daring Kim. I think a lot of lessons can be learnd from this movie. One, don’t judge a book by it’s cover. Two, the world is an evil place. I was 13 when I saw this first, and I just stubled upon it on ABC Family.

This is probably the only movie that has made me cry at the end. This is the best movie of all time!
My Ratings: Moral rating: Excellent! / Moviemaking quality: 5