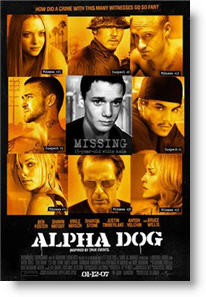 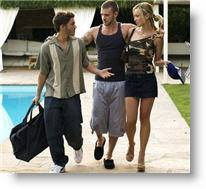 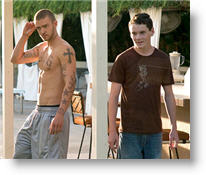 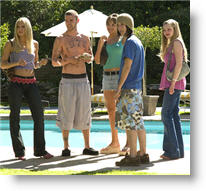 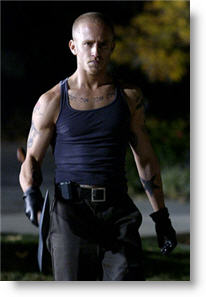 Here’s what the distributor says about their film: “Inspired by actual events, ‘Alpha Dog’ revolves around a mid-level drug dealer from the San Gabriel Valley whose thirst for power led him to become, at 19, the youngest man ever to appear on the FBI’s Most Wanted list. Emile Hirsch stars as teenage suburban drug dealer Johnny Truelove, an ambitious young man whose lifestyle is a mecca for guns, sex and drugs. When a ‘client’ cheats Johnny and a deal goes bad, he devises a plan to get his money back by kidnapping the client’s younger brother—but it’s not a typical kidnapping when it turns out that everyone knows and likes the kid.

So what now? Things take an unexpected twist as Johnny and his crew get caught up in the dangerous and violent world they once idealized. Featuring a strong ensemble cast that includes Hirsch, Justin Timberlake, Bruce Willis, Sharon Stone, Ben Foster, Shawn Hatosy and Anton Yelchin, ‘Alpha Dog’ is written and directed by Nick Cassavetes (“The Notebook”, “John Q”).”

Story based on the life of Jesse James Hollywood, the youngest man to ever be on the F.B.I.'s most wanted list.

Negative—I started watching this movie because I live not far from where the boy they killed was found. I was interested to see how the movie played it all out. I also know family of Nickolas the young boy killed. Within the first 20 mins. of the movie there was a ton of foul language, which probably is how those boys would talk. There was also a very graphic sex scene. The dialog was also referring to sex in a very graphic nature. We didn’t continue watching this film. I already knew the ending and didn’t need to hear the foul language, see the violence of the young boys death or see the graphic sex scenes. I wouldn’t recommend this to anyone.
My Ratings: Extremely Offensive / 3

Kelly, age 31
Negative—I started watching another typical Hollywood movie with deplorable characters whose lifestyles had this viewer thinking tragedy. Except this time, I was tempted to count the different words used in the dialog, to see if the vocabulary was actually limited to just about a dozen words—and half of those being profane utterances. So offended, I finally gave up caring about the ending and walked out.
My Ratings: Very Offensive / 3

Dennis A., age 52
Positive—This movie was actually good… it had some language, and some mild sexual references, it also had drug use like 4 times! It was an alright true story! I thought it was going to be really good. But it was still good. just not as good as I expected it 2 be… overall, I give 4 stars out of 5!
My Ratings: Average / 4

Jack, age 39
Negative—I started watching another typical Hollywood movie with deplorable characters whose lifestyles had this viewer thinking tragedy. Except this time, I was tempted to count the different words used in the dialog, to see if the vocabulary was actually limited to just about a dozen words—and half of those being profane utterances. So offended, I finally gave up caring about the ending and walked out.
My Ratings: Very Offensive / 3

Dennis A., age 52
Negative—My husband and I went to see this movie, thinking that it would be a typical shoot-'em-up, guy movie. Instead, the plunge into the evil morass of drug use, immoral sex, and ungodly living left us both appalled. We watched until we couldn’t stand it anymore then left. If you want to see a movie which shows the dark side of human character that abandons itself to the lust of the flesh, that is absolutely devoid of any goodness or righteousness, this is your movie. Otherwise, it is definitely not a movie that you’d want stored in your brain.
My Ratings: Extremely Offensive / 4

Tanya, age 43
Positive—Apparently no one who has reviewed this film thus far has watched it, or has ever watched the news. “Alpha Dog” is based on real life criminal Jesse James Hollywood. From what I have researched, the movie is fairly accurate to the events that occured. Of course, the movie is very nasty, has tons of drug use, and has sex scenes. It is showing the lives of criminals… what else do they do in their spare time? But, many of this Web sites readers apparently do not understand reality and would rather live in their Christian bubble. Stuff like this happens, all the time, in urban, suburban and rural areas. I would recommend this movie to anyone, and I encourage viewers to read actual case files and news clippings either before or after viewing.
My Ratings: Very Offensive / 5

Jeremy, age 23
Positive—I understand most Christian’s desire to see movies on the level of “Sound of Music,” no gratuitous violence or sex or curse words, that may have a morally uplifting theme, and this is definitely not such a movie. I know from reading many other reviews that many Christians walk out from a movie they find offensive but oftentimes I wished they stayed because oftentimes there is a lesson to be learned, how living a life without Christ, leads to tragedy. If you have children that want to behave in what one would consider non-Christian behavior—to be with people they consider part of the “in” crowd, and they are older teens, you may want them to watch this movie. This tragedy could’ve been avoided had the children in the movie had moral guidance from their self absorbed parents and through Christianity. The kids lived an amoral life, with drugs and casual sex, and even though some knew the victim was kidnapped none called the police, thus possibly saving his life. The kids who directly killed the victim were not as evil as the leader who directed the hit, but because they did not have a moral compass and were young and naiive their cruel action changed not only their life but those of the victims relatives.
My Ratings: Extremely Offensive / 4

Evangeline, age 52
Negative—I was very upset with the filth and the crudity in this movie. JT was the only person that was actually funny. But I ended up turning it off because of the bad language…
My Ratings: Extremely Offensive / 1½

Amber, age 27
Negative—I now understand why so little of the actual movie was shown in the commercial, because there was no way of doing it and making it a rated G commercial. It seems like every time someone’s mouth opens something horrible comes out. This movie so much swearing and profanity if someone was to even try and count how many times vulgarity was used they would lose count in the first 10 minutes! I stopped watching the movie after maybe 30 minutes of watching it, mainly because I couldn’t stand the swearing and extreme perverted talk. I think to say this is a good movie to watch because it depicts how the world really is is ridiculous. You could use this excuse for any movie out there that shows bad language, graphic sex scenes, drug use, etc. I don’t know how anyone can get anything positive out of this movie. Pass on this movie.
My Ratings: Extremely Offensive / 2

Christina, age 24
Comments from young people
Neutral—I saw this movie earlier this year with a group of about ten friends. I personally enjoyed this movie a lot, probably because it was based on a true story. The film progresses quickly, taking place I believe in southern California. The main characters are all troubled young adults, most of which sell and use drugs for a living. However, you can’t solely blame the immoral actions of the movie solely on the teenagers.

There are few if any adults in the movie who promote morals or righteousness in any of their children. The drug use is amazingly high considering that the whole movie revolves around the illegal drug market and the negative consequences that come from being connected to dealers and users. Even young teens at the age of fifteen are shown using drugs, swearing and having premarital sex. Family betrayal and false friendships are prevalent. You don’t know who to trust throughout the movie. Sexual content is pretty mild except for one scene of a young teen boy and two teenage girls fooling around in a swimming pool nude. On the contrary, the sexual innuendo is high and even shockingly shows a mother and son speaking graphically of the sex she plans on having with her husband that night. This is definitely not good parenting skills, if you asked me.

I cannot solely blame the film for its content since it is based on a true story and understandably they must stick to the original plotline. However, this movie is incredibly offensive to both christians and non-Christians with violence, murder, drug use, cursing, horrible parenting, rebelliousness and sexual content and innuendo. I wouldn’t recommend young children or young teens to see this movie since it could be really impressionable. Still, the filmmaking quality was very well done and it is an important life lessons on how certain early mistakes in life can create devastating consequences. It can also start a lot of Christian-based conversations on parenting, drug use and choosing your friends.
My Ratings: Extremely Offensive / 4½