for some sexuality, nudity and language 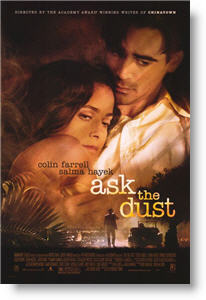 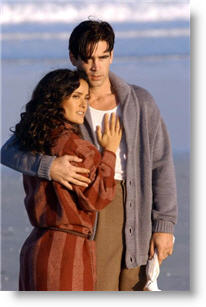 “Ask the Dust” is like a beautiful car that never starts. Everything looks right. The film is based on a successful novel by John Fante. It was helmed by Robert Towne (“Chinatown”), and its two stars are amongst the best that Hollywood has to offer.

The film is set during the Great Depression; yet there are no memorable dramatized shots of suffering and poverty. Colin Farrell plays Arturo Bandini. Bandini is a starving writer lusting after fame and fortune. He lives in a hotel located on Bunker Hill, a low end section of downtown Los Angeles. Selma Hayek plays Camilla, an illiterate strong-willed Mexican woman trying to land an American husband so that she and her children “can have a chance.”

When Arturo comes to the diner/bar where Camilla works, he coldly demeans and degrades her. Then he feels bad and attempts to make peace with her. He makes contact but is hateful to her all over again. She is as nasty to him as he is to her. For some reason she takes him to the ocean. They go skinny dipping. He eventually tries to drown her. She hates him. He loves her. Are you still with me?

Somehow they fall in love. You never really understand why, and unfortunately you never really care. If I failed to mention Donald Sutherland’s small role, it is only because it was not worth mentioning.

At the end you begin to understand why Arturo was the way he was but unfortunately it was too little, too late. With greater character development there could have been some much needed irony, there wasn’t. There were attempts at humor, but they didn’t work. Instead you have a sappy, half-baked love story wasting two talented actors and two hours of my time.

From the eyes of a believer, we can see how the lust of the eyes, lust of the flesh and boastful pride of life are gloriously portrayed. Our main character is a lady’s man who fornicates with women and dreams of success. There is emptiness and seediness to his lonely and miserable life that he tries to fill with money and women, ignorantly trying to fill a hole that can only be satisfied with Christ.

It is a typical story, yet poorly executed. Wanting to be a poetic masterpiece, this film ended up being a gritty, boring and cheesy portrait of a secular life.

Beware, that there is nudity and strong sexual content.