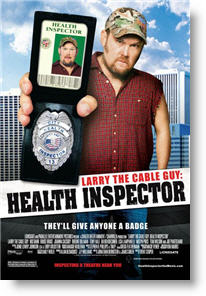 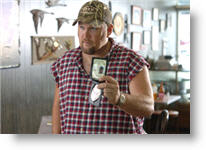 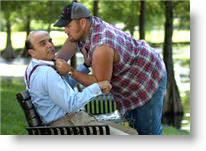 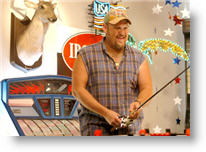 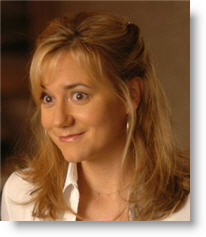 “They’ll give anyone a badge”

Larry the cable guy has a new role: Health Inspector. He and his new partner, Amy Butlin, are on assignment; they must find the culprit in a string of mysterious restaurant poisonings. Despite Larry’s blind eye to anything but blatant health code violations, he finds himself with this high profile role, much to his boss’s chagrin. His antics and poor manners not only offend his working partner, but restaurant owners must force a smile when confronted with dinnertime flatulence.

Meanwhile, Larry develops an unlikely romantic relationship with Jane, a lingerie store clerk, who is fired after creating a mess as a result of Larry’s flirtations through the store window. Jane is not deterred by Larry’s large, redneck truck full of trash, and Larry fits right in with Jane’s “fat and sassy” mother (as Larry refers to her), with whom Jane still lives. Their relationship is put to the test when the infamous Health Inspector is placed in such an intensive work environment.

This movie is thick with crude and sexual humor. Potty humor invades nearly every scene, and Larry freely dispenses euphemisms for his need to visit the restroom, for both male and female anatomy, and for other sexual topics. The most questionable scene of the movie occurs when the cable guy wakes with an erection after a suggestive dream sequence with Jane. While Jane makes it clear that she would not choose to engage in sexual activity on a first date, Larry suggests that he would pursue that possibility. There is no nudity, except Larry’s struggle with “Plumber’s Pants.” Larry, say no to crack.

For those who suffer from a less-than-steel-stomach, be warned that restaurant patrons are shown actively vomiting on various occasions throughout the movie.

During the course of the movie, several characters consume beer, and Larry becomes drunk during one scene. His drunken state is induced by disenchantment in a dating relationship, and he unfortunately turns to alcohol to avoid feeling his disappointment. Further, his home décor includes a metal beer wall advertisement, and to maintain his redneck character, Larry is depicted using chewing tobacco on at least two occasions.

The movie was fair in dispensing insults to all groups of people—few escaped the spotlight. Larry repeatedly accused his boss of being a homosexual with references to gay bashing, a gay parade, and being a “flipper.” Larry’s neighbor is what he calls, “semi-retarded,” and is portrayed as an incompetent middle-aged man who would be lucky to find a job tearing ticket stubs at the movie theater. Also included is a reference to “farting Jews,” a mocking portrayal of a Muslim father, a disliked woman who is “so ugly she could trick or treat over the phone,” and a bold discussion of racial nicknames between Larry and an African American buddy. Larry even insisted on calling his partner, Amy, a male for the majority of the movie. Any opportunity to highlight and ridicule a difference in someone else was exploited.

The Mayor of Larry’s hometown plays a prominent role in the storyline and is unfortunately characterized as a smarmy and unsavory fellow. He is shown using a peep hole to spy on his administrative assistant, and he asks her whether it would be appropriate for him to request a shoulder rub. When she declines, he murmurs, “What is her problem?” The movie plot also reveals that this public servant is engaged in sexual conversations using online messenger programs.

One sequence in the movie contains various forms of “humorous” physical fighting. There are no weapons used in the movie, but there is one reference to an accident that occurred after a gun was stolen from Larry’s truck. He stated that he has subsequently ceased carrying weapons in his vehicle.

The language used in the movie is rarely clean. Though I believe the audience was spared from the f-word, the dialogue was peppered with uses of d*** and a** (10 or more uses or each). There were at least two occurrences of sh**, four or more deliveries of son-of-a-bi***, and “Lord” and “Jesus Christ” were used in vain during more than three lines.

In spite of a laundry list of inappropriate behavior and dialogue (of which I have only scratched the surface here), Larry has some redeeming and endearing qualities. Not only is he a tremendous fan of Moon Pies, but also he is very self-assured and comfortable presenting his true self in all settings. He does not find it necessary to conform to the dress codes of fancy restaurants, and he makes no apology for his accent and poor grammar. He is also an advocate for the “underdog” and the hard-working common man.

Surprisingly, Larry considers himself a Christian. While complaining about his boss, he remarks that perhaps he should not feel or speak that way as a “good Christian.” After experiencing “a miracle from the Lord Jesus,” Larry vows to go to church every Sunday. Larry needs someone in his life to share with him that it is by faith in Jesus Christ that we are saved from our sins. We are not “good Christians” because of our actions, rather we are made righteous by Christ’s death on the cross and his resurrection from the dead. Also, while we find opportunities to fellowship, learn, and grow in our relationship to Christ through church attendance, it is not a requirement for entrance into Heaven. It is a person’s faith in Christ as Savior, not works or church attendance, which determines whether he will be invited into Heaven.

This movie had humorous moments, despite being extremely offensive as a whole. However, I do not recommend this movie to anyone under 18. Adults should use careful judgment as the language, sexual content, and crude humor may be a stumbling block for even the most mature believers. For anyone who carefully guards his or her heart, I would recommend passing this one up. The laughable moments do not outweigh the distasteful content.

Neutral—I have not seen the movie, but in Larry’s (actually Danny’s) defense, I would like to correct one statement. We grew up in the same small town in Nebraska, and it is true when he says his father was a Baptist preacher. Also, after his family moved to Florida, he attended a Christian high school. Danny does know the Truth. We need to continue to pray that the Holy Spirit convicts him, and he changes his ways. What a testimony that would be! Perhaps as a father-to-be, he will give more thought to the legacy he leaves.
My Ratings: Offensive / 3

Frank, age 47
Comments from young people
Negative—I personally didn’t really like the film at all. It was so dumb. It didn’t do anything new. I basically watched the Blue Collard Comedy Tour. It was the same thing, but without the other three comedieans. It was so dumb. See it on DVD.
My Ratings: Offensive / 3

Matt, age 16
Negative—Wow!! THis movie was a real bore. Besides tossing in 30 crudities, it had a big helping of harsh language. Plus, the acting is horrible. Not worth the pay.
My Ratings: Extremely Offensive / 2

Jared, age 13
Neutral—I loved this movie, it was funny. It is extremely difficult to find a not offensive movie, so this one is not that bad compared to “The Libertine” or “Brokeback Mountain”. It is still not a good idea to bring anypne under the age of 12 to this movie.
My Ratings: Offensive / 3

Mary Fulton, age 13
Positive—Larry the Cable Guy has always been a cult following. Those who love him can’t get enough, and those who hate him can’t stand it. It’s alright though, that’s just how it goes. Most folks simply don’t get Larry’s humor; maybe they’ve just grown out of the kind of person Larry appeals to. Regardless of how, many are just not humored by him.

I’m an avid Larry fan, along with the other three Blue Collar boys. His type of humor may be crude and a slight bit bigotry, but his demeanor of stupidity and general oaff-ness manages to keep a balance. Like a physical way of telling us “Don’t take him seriously.” Things like “Git-R-Done” and “That’s funny right there, I don’t care who you are.” are the kind of jokes only someone of Larry’s class (and I use the term lightly) could possibly invent. You’d never hear Jon Stewart say anything like that.

This film has plenty of crude humor, but the manner in which it’s presented manages to keep from getting over-the-top offensive. For example, the semi-retarded neighbor, the “gay” boss, they’re presented in a non-believable light and, more importantly, the character that express all this is an oaf. He’s not to be taken seriously; it’s almost as if they’re saying “Yeah, he’s stupid, and look what he does.” But also, this movie isn’t really for kids under the age of 12. It isn’t overly offensively for kids (not sex or guns or anything like that), but the comedy isn’t intended for them. This is adult humor, so adults will see it. If anything, don’t take kids to it because they probably won’t get most of it. But if you do take a kid to see it, as with any movie with material that’s objectible for them, talk to them about it. You’ve got a whole car ride home, perfect for explaining to them the do’s and don’ts of God.

As a Larry fan, I thought the movie was a riot. He used the hour and a half od screen time well. If you’re a Larry fan, see this. If your offended by crude humor, avoid this (you’re probably not a Larry fan anyway). But if you don’t have a problem with it and enjoy Larry, check it out. It isn’t a movie you absolutely must see in theaters, waiting for the DVD won’t take away from the experience. However, if you like Larry, have some spare cash and time, drop by your theater and take a look. You won’t be disappointed.
My Ratings: Average / 3

Kevin, age 17
Positive—Most people think this movie is offensive, which wouldn’t be a lie, but this movie, to me, was outstandingly funny.
My Ratings: Excellent! / 5