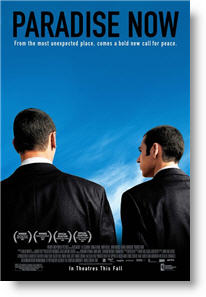 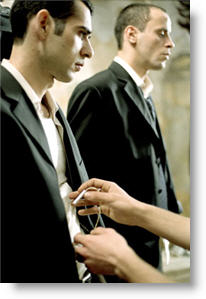 “From the most unexpected place, comes a bold new call for peace”

Here’s what the distributor says about their film: “‘Paradise Now’ is the story of two young Palestinian men as they embark upon what may be the last 48 hours of their lives. On a typical day in the West Bank city of Nablus, where daily life grinds on amidst crushing poverty and the occasional rocket blast, we meet two childhood best friends, Sad (Kais Nashef) and Khaled (Ali Suliman), who pass time drinking tea, smoking a hookah, and working dead-end menial jobs as auto mechanics.

Sad’s day takes a turn for the better when a beautiful young woman named Suha (Lubna Azabal) brings her car in for repairs. From their spirited interaction, it is apparent that there is a budding romance growing between them.

Sad is approached by middle-aged Jamal (Amer Hlehel), a point man for an unnamed Palestinian organization who informs Sad that he and Khaled have been chosen to carry out a strike in Tel Aviv. They have been chosen for this mission as a team, because each had expressed a wish that if either is to die a martyr, the other would want to die alongside his best friend.

Sad and Khaled have been preparing for this moment for most of their lives. They spend a last night at home—although they must keep their impending mission secret even from their families. During the night Sad sneaks off to see Suha one last time. Suha’s moderate views, having been educated in Europe, and Sad’s burgeoning conflicted conscience cause him to stop short of explaining why he has come to say good-bye.

“Paradise Now” follows two Palestinian childhood friends who have been recruited for a strike on Tel Aviv and focuses on their last days together. When they are intercepted at the Israeli border and separated from their handlers, a young woman who discovers their plan causes them to reconsider their actions.”

Positive—This movie was a very interesting story of two men that were dear friends that decided to make the decision to become suicide bombers for their fight/cause. It is somewhat enlightening to see their lives and views expressed. I believe the movie only touched on their beliefs, but did a good job portraying why there are people who are dying for their cause. It was overall a very interesting movie to watch, although, not a super “entertaining” one. I believe the biggest thing this movie did for me was to open my eyes to understand the issues/people better and to pray for them with compassion!
My Ratings: Good / 3