for some language and a scene of sexuality 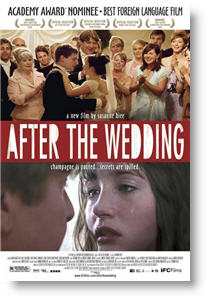 Are you going to Heaven? Answer

“Champagne is poured… secrets are spilled.”

“After the Wedding” is an alluring story told masterfully by director Susanne Bier and screenwriter Anders Thomas Jensen. The quality of this film caught me a little by surprise, and its success at film festivals and being nominated as best foreign film at the Academy awards are well deserved. Equally as strong as the depth of story are the spectacular performances by Mads Mikkelsen, Rolf Lassgard and Stine Fischer Christensen.

Jacob (Mads Mikkelsen) is a miserable, large-hearted man devoted to Indian orphans; he is working for an organization in deep financial trouble. A potential benefactor named Jorgen (Rolf Lassgard) wants to find out more about this non-profit organization and asks for Jacob to return to Denmark to present the needs of the orphanage. It is at this meeting that Jorgen invites Jacob to his daughter Anna’s (Stine Fischer Christensen) wedding. Jacob keen to get the business out of the way and impress Jorgen accepts. It is at the wedding that his life takes a dramatic turn, as his history catches up with his present day reality. The rest of the film uncovers a manipulating scheme for Jacob to take responsibility for a life he didn’t know existed.

This is an incredible story with many layers, as each layer peels away the viewer is exposed to more critical information that makes for a heart-wrenching climax. As far as melodramas go, “After the Wedding” succeeds in not turning into a typical soap opera.

There are two scenes that are offensive. The first is when Anna throws a deserved tantrum at her mother but manages to use the f-word about 5 times in two sentences. You could stop reading the subtitles for this short scene and avoid the swear words and not miss a critical part of the script. The second offensive scene is a short, adulterous scene where the adulterer is caught, and there is partial nudity for about 4 seconds.

One of the most poignant scenes for me as a Christian was of a man who knows he is facing imminent death. This man is terrified and grieved to a point of almost madness. This scene is a catalyst for end of the film, yet I could not help but feel that if this man knew Jesus as his savior his coming death would not have caused the angst he displayed. It is a scene like this that helps me see the urgency that people have for the gospel of Jesus Christ. If I don’t share the good news now, it might be that person’s last chance to hear. Death without Christ would be a scary, scary thing.

Positive—I like foreign subtitled films as I believe you can really focus more on the dialogue reading it and it keeps your concentration. I agree [about] the offensive parts and feel that the “f” word was unnecessary especially since this seems to be a loving family, but I think at the point the daughter uses this word she is just so frustrated that she loses herself—not really acceptable but yet in the secular non-believing world this happens. The other partial nudity scene could have been conveyed with their clothes on, although no private body parts were really seen, just the woman’s back and the male’s chest. But it was suggestive.

I feel that this movie was very introspective as to how a man must choose between one burden and the other; he has a committment to care for an orphan then finds out a long lost daughter also needs him as her “newly found” father. At a funeral the words are clear on the screen about the hope we have in Jesus because of the resurrection; this was spoken at the funeral, yet we don’t know that this man who died was a believer (he tells his sons to lie to the mother in the film), but I couldn’t help think that this may have planted seeds in the audience to just see these words on the screen. I would only recommend this to high schoolers or older, and would caution parents with the partial nudity scene. I really enjoyed it.
My Ratings: Offensive / 4