Arthur and the Invisibles 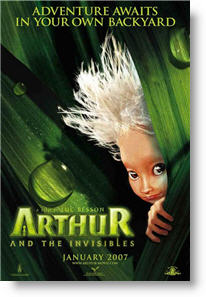 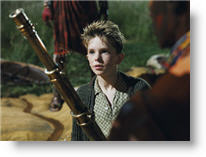 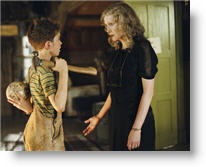 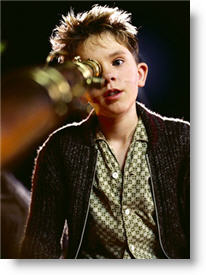 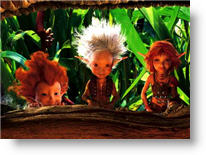 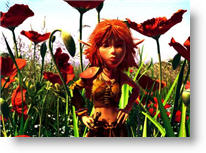 “Adventure awaits in your own backyard.”

It is the summer of 1960, and Arthur (Freddie Highmore) is staying with his grandmother (Mia Farrow) in rural Connecticut. Arthur who was at boarding school in England is home for the summer. His grandfather, Archibald, is mysteriously missing, and his parents have gone to the big city to find jobs. Hard times have fallen, and grandma is ready to lose everything. Arthur spends his 10th birthday sad and almost alone except for his dog and grandmother. When he finds his grandfather’s journals and drawings, he realizes the key to saving everything is finding the buried treasure that his grandfather brought from Africa.

By a stroke of good luck, Arthur finds the Minimoys (Invisibles) and sets out on an adventure with Princess Selenia (voice of Madonna) and her younger brother Betameche (voice of Jimmy Fallon) to save the Minimoys and the buried treasure. The balance of the movie is spent in computer-animated-land watching Arthur and the Minimoys save the farm from becoming an apartment complex with concrete over everything.

VIOLENCE: While most of the violence in this movie was cartoon violence, some of the bad guys could be scary to some children. In the land of the Minimoys, who are only a tenth of an inch tall, there are flying creatures (mosquitoes) who attack, evil small people (who may be Minimoys gone bad), and a seriously bad guy, Maltazard (voice of David Bowie). There are several “battle” scenes in the movie with armor clad drones fighting the Minimoys.

When the real estate developer first comes to Grandma’s house, he slips on a ball and falls. Arthur falls off a chair and breaks a door, and he also drives a car and smashes it into a tree.

PROFANITY: While there is minimal objectionable dialogue, there are a few incidents of using God’s name in vain. There is also a line where one of the little people say “May the gods hear you.” The phrase “pain in the keister” is used, along with a few other words such as butt and stupid.

OBJECTIONABLE CONTENT: While there is no nudity, Princess Selenia’s dress may offend some people. She is a cartoon character with tight pants, an exposed midriff, and a top that is equivalent to a sport’s bra. There is a cartoon dance club scene with a couple dancing and an exposed rear view. Arthur is supposed to be a 10 year old boy, but when he meets the Princess, he clearly is infatuated with her. While nothing happens between the two of them, some of the scenes have a romantic nature.

While they never say how Arthur is transformed into the land of the Minimoys, it is obviously a “magical” transformation. There is also a “magic” sword that possesses powers. The King of the Minimoys (voice of Robert De Niro) asks the spirits of the ancients to guide his daughter in her quest.

Another element that may be objectionable to some is when the real estate developer “does business” at church. He mentions going to church to see the mayor, the notary, the sheriff, the banker, etc., all in an effort to acquire the property of Arthur’s grandparents.

Arthur’s grandmother is shown putting sleeping drops into a glass of water before bedtime. When Arthur knocks over the bottle of sleeping drops, they “overdose” the water, and grandma is immediately put to sleep upon drinking the water.

This movie is the traditional good versus evil theme. Arthur and the Invisibles are good, and they are fighting the evil—everyone from the bad real estate developer to the evil underground creatures. There is a moment in this movie that can spark discussions. Arthur’s grandfather says that to pray for a miracle, and while we as Christians pray to Jehovah in the name of Jesus Christ, not everyone prays to our God. This can be a wonderful time to talk to your children about who we pray to and why. You can also use this movie to discuss the good (God) versus evil (Satan). The evil Maltazard made bad choices in friends and over time became evil because of his quest for power, just as Satan rebelled against God in his quest for power.

While this movie began interestingly enough, and I had high hopes for it, it failed to spark—I just kept feeling like things were too disconnected, and there were too many unanswered questions (Where did the tribal people come from? Why could only one go into the land of Minimoys and yet two came out?). I also felt there were many cute scenes and wonderful moments, and then there were scenes that this movie felt “icky,” such as when Arthur (a 10 year old boy) immediately becomes infatuated with a 999 year old Princess (who is also only 10 in our time).

There were too many scenes when I felt I was watching another movie. The only person who can remove the sword is the one with a pure heart. The flying mosquitoes with riders resemble pod racers. The trudging through the backyard as miniatures reminded me of scenes in “Honey, I Shrunk the Kids.” Some of the underground scenes reminded me of the “Lord of the Rings.” Even some of the names, dialogue and faces seemed to be taken from other movies.

I could use some cheesy line about “Arthur and the Invisibles” disappearing into the land of unwatched movies, but I will resist. My bottom-line recommendation is, if you can avoid this movie, you should. However, if you must watch it, save this movie until it comes out on DVD, and wait for a rainy afternoon with nothing better to do.

Neutral—Overall, I would say that this film is average. The plot drags a bit but the storyline is at least somewhat original and entertaining with one exception. The main character, who’s name is Arthur, pulls a sword with magical powers from a stone and he is the only one who is able to do it. This is the only story line that seems to be borrowed from another story but there doesn’t seem to be any other link to the roundtable, etc. so it just seemed a bit confusing and out of place. It seems like a movie better suited for 10 and up (as my kids are) because of the romance of the main character and some of the harsh realities of life (like the realator doing business at the church). I didn’t care (or think it was necessary) for the princess to have such tight clothing—something simpler would have been more appropriate and just as appealing. However, although the way Arthur went about it was wrong, his intentions for his quest were “pure;” he wanted to make sure that his grandparents didn’t lose their house and belongings and helping out the “invisibles.” So, you must be willing (able) to take the good with the bad. I wouldn’t call it a “must see” but it makes for a good rainy day activity for older children.
My Ratings: Average / 4

Susan, age 34
Negative—I have three children ages 2 to 12. I found the romantic connection between the 10 year old boy and the older elf princess troubling as I did the drug/club scene with Snoop Dog. In the club, after the drink, the characters appeared to act high and it was a good thing in view of the movie. After the drink, they all opened up and started telling about themselves, how sad for the kids watching. The respect for God was not only absent from the movie, but the movie was clearly showing that God would not answer prayers. When the grandfather said “all we can do is pray,” the boy didn’t pray, he solved it on his own. Another razor blade coated in candy for our kids. It was also bothersome to know that such an older woman played the part the boy had a love interest in… but she said that she would wait for him. I do not think kids should see the movie without a Bible versed adult to explain a few things.
My Ratings: Very Offensive / 5

David LaRue, age 36
Negative—This movie had too much going on at once. My 9 and 10 year old boys wanted to leave toward the end, so we never found out where the treasure was and if he saved his grandmother’s land. We met another mom to view the movie and she and her 9 yr. old son left as well. I just wondered what the writer of this movie had to be smoking when he wrote it… what a trip… they seemed to worship these miniature gods, and never referenced God at all.
My Ratings: Average / 4

Shannon, age 38
Comments from young people
Positive—I went to see this film in the theatres the night that it came out. My personal opinion of the film is contrary of the film’s reviewer. I believe that this movie was very well done. I, myself, did not very much enjoy it as a 14 year old who went because it was the only film that my younger brother could see. For a younger audience, however, I thought it was fantastic. The animation was absolutely spectacular, and a lot of fantastic actors were in this movie and played their roles very well. Freddy Highmore especially was good. The big question of movies for children nowadays is 'is it appropriate?' I am proud to say that this one was very clean. The violence may be a bit intense for those under 4 but other than that I believe that there was nothing offending. I was also very surprised that, unlike most films of this genre, there was no bathroom humour, but still funny at times. I also believe that this movie is not a copy of other films. The plot is totally original, and a lot of creativity went into this project. My final word is that this movie is totally family-friendly and worth going to theatre with your family to see.
My Ratings: Better than Average / 4½

Joel Dugard, age 14
Positive—I realy injoyed this movie. I saw it with my 23 year old brother, and we both loved it. No gore. Actually, it is extremely clean—no kissing. Some mildly scary scenes. Nothing bad.
My Ratings: Excellent! / 5

Ethan Audet, age 13
Neutral—I thought it boring at times. And at one part it said “All we can do is pray,” and they didn’t end up praying. I had a laugh or two. But overall, get it on DVD.
My Ratings: Average / 3