for language, an intense disturbing situation, and brief drug use 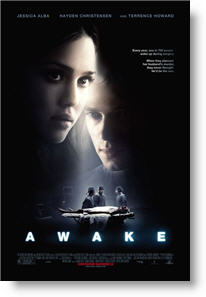 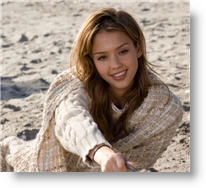 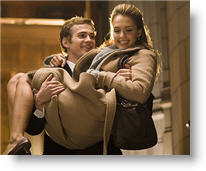 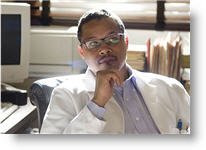 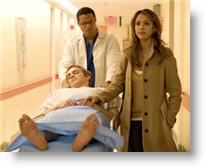 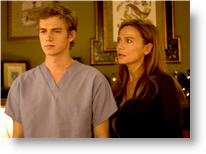 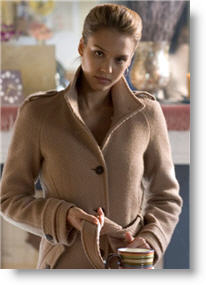 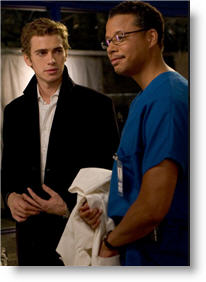 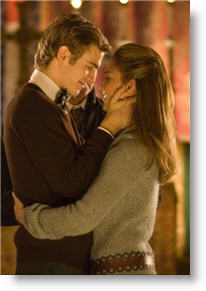 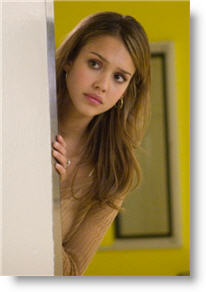 “Every year, one in 700 people wake up during surgery. When they planned her husband’s murder, they never thought he’d be the one.”

I might be jumping the gun here, but I liked Hayden Christensen’s portrayal of a young man, Clay Beresford, who is at 22 the youngest successful high profile businessman in town, who sincerely wants to please the mother he loves, live up to what he perceives his dead father would want him to be, and marry the sweet girl of his dreams. He wants to live happily ever after, but there’s a glitch, he has a bad heart and must have a transplant in order to live long enough to accomplish all he desires.

Fortunately for Clay, he has become close friends with Dr. Jack Harper (Terrence Howard)a heart specialist who once saved his life and who has agreed to be the surgeon who performs the transplant when a donor heart finally becomes available. The one thing keeping this from happening is Clay’s rare type AB negative blood and as it goes, life has given only one other person close to him that blood type, his adoring Mother Lilith Beresford (Lena Olin).

Jessica Alba who plays Sam Lockwood, Clay’s fiancé, also may be overlooked here. She gives a riveting performance which transforms moment by moment from the demure girl of his dreams to a cruel and selfish gold digger.

After setting up the front story, we begin to take note of the true reasons Jack Harper has been cozying up to Clay for over a year, and the lovely Sam Lockwood is not after true love. Their motives are far from Clay’s best interests. As Clay goes under the knife and presumed helpless we begin to recognize there are sinister forces who have planned the perfect murder. Ultimately designed to profit from his death by getting most if not all of his millions.

It is at this point in “Awake” we catch the promotional thrust. Clay Beresford turns out to be the 1 in 700 patients yearly who experience “anesthesia awareness” during surgery. A horrifying occurrence where the patient, although completely paralyzed, can hear and feel everything going on during the surgical procedure.

Clay is now until the end of this thriller, in a fight against time and what seems insurmountable odds to expose his killers and save his own life. (I do not like spoilers, so you will have to see this film for the reasons and plot twists.)

I saw this film as trying hard to walk in the footsteps of a Hitchcock thriller, and in nearly made it.

Although the movie starts with such statistics as out of 121,000 people who are anesthetized 30,000 suffer from anesthesia awareness and another site tells us 1 out of 700 stay aware of their surroundings, the tagline is a gross misrepresentation of real statistics. The actual estimate of awareness during anesthesia is 1:14000 for high risk patients to as low as 1:42000.

Although no nudity was seen outright, there is a love scene centered around the two main characters in a bathtub. In the tub there was lots of passionate kissing but the two were never shown completely nude. There also is a scene where they are standing with their backs to the audience while they look into a bathroom mirror, he shaving, she getting made up, and although they are shown to be nude, nothing is exposed. This, of course, brings me to the fact that the two main characters are in love and are having pre-marital sex. For the concerned Christian, this is against God’s plan and should be taken into consideration.

Since a generous portion of this film is spent in an operating room and a surgical procedure is taking place, there is blood and very realistic scenes showing surgical knives cutting through flesh, beating hearts in and outside the body along with needles, drugs and other various props. There is also a scene where a Doctor is sawing through the chest cavity in order to prop it open to get to the heart of the patient. For anyone who might get a queasy stomach at this type of realism, I might caution them to stay away from this film, as it is extremely unsettling for the viewer. Not just the fact that the operation is taking place, but in addition the patient is totally aware of what is going on and of the pain he is feeling which makes it all very intense.

The rating for “Awake” is a solid “R” because of intense disturbing situations, drug use by Clay for his heart condition and in the final scenes, a death scene, for language, and for the partial nudity I spoke of above. The foul language in this one was a little much, for the most part believable, as the main character goes through some pretty shocking experiences. I felt uneasy when the F-word was used over a dozen times through out! Surely someone writing scripts these days can think of some other explicative. This is an adult movie full of blood, intense realistic surgical scenes, along with mature emotional situations and no one under 17 should see it, period!

There are many positive factors to take into consideration which may come as a surprise in a murder mystery.

Clay’s mother, Lillith Beresford was an example of sacrificial love. On more than one occasion in this film, she gave of herself for her child, showing wisdom and forgiveness at his rebellion, understanding he needed to take control over his own life. Her character finally giving the ultimate sacrifice for her son. No greater love comes to mind here, and I hope those watching will pick up on this.

The character of Clay Beresford is a truly innocent sincere young man who wants to please his friends, family and the girl he loves. He is shown as a complete innocent, much as many of us in the world are. The evil takes him completely by surprise, as Satan always does. If we are to go through life in this world, we must be as innocent as lambs but claim our strength from the saving faith we have in Jesus. There is no way we are going to be able to overcome evil on our own. We must attain the strength we need to live in this world from our Savior Jesus Christ. Satan is going two and fro throughout the Earth like a lion ready to devour all that he can. We cannot save ourselves through some power we conger up from within, as a ‘spirit’ of Clay was shown to have done in “Awake.” Quite the opposite. In order to prevail over the Devil, we need the strength only The Lord Jesus can provide.

In wrapping up, it is a shame that none of these characters chose to rely on God for help and strength, but then the story wasn’t going after redemption, but with the power of inner strength. Unfortunately, a notion running ramped in today’s world. That we can somehow pull our own selves through all the hurt, selfishness and pain the secular world throws at us from somewhere deep inside ourselves. A notion that spirits can talk to one another also is shown. I believe it is the way you look at it. As something real, or as the way the writer chose as a representation of how close Clay and his mother actually were. I will leave this up to you.

While most movies that deal with wealth and power these days tend to focus on the shrewd capabilities of the character, “Awake” has chosen to see Clay’s life from a personal perspective, only hinting at his prowess and capabilities here and there. Writer/director Joby Harold has chosen instead to let the audience get to know this young man’s inner battles and his sincere wish to please. I, for one, found that refreshing, but other reviews I am sure will find the character of Clay Beresford weak for having just what this movie deals with, and that is a heart.

In closing, it is imperative that we all consider a heart transplant of sorts. We all, even though we might be good people, need something more to overcome the evil and sin of this world. Mere goodness and some pre-conceived idea of “inner strength” just won’t get you through life.

God made it possible for us to have a new heart—one capable of living His way of love, obeying His laws. The ultimate Healer and Physician is the only one able to do this for us.

“I will give you a new heart and put a new spirit within you; I will take the heart of stone out of your flesh and give you a heart of flesh. I will put My Spirit within you and cause you to walk in My statutes, and you will keep My judgments and do them” (Ezekiel 36:26-27).

Comments from young people
Negative—I strongly disliked it, and thought it was the worst movie I have ever seen. …it was poorly written and had no suspense (it was supposed to be suspenseful).
My Ratings: Moral rating: Average / Moviemaking quality: 1

Zoey, age 18
Negative—The movie had very poor plot and was highly unrealistic. Anakin, or rather Hayden Christiansen, did a very poor job acting and it felt like he was still in Star Wars with his expressionless lines. Whats-her-name Alba was also sub par and it seemed like she thought just showing up would be good enough.

I only watched this movie because I am studying to be a doctor/surgeon, but I actually had to turn it off due to how slow it was going, how not-intense it was, and how poor the set was (i.e. the operating room seemed like it was in some cheap clinic or something).

Overall, not a good movie at all and incredibly dull.
My Ratings: Moral rating: Average / Moviemaking quality: 3½