for some sexual references 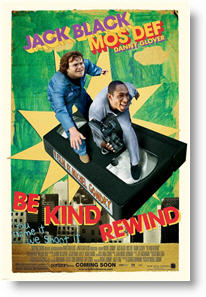 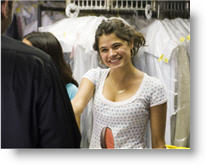 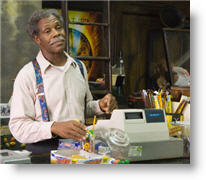 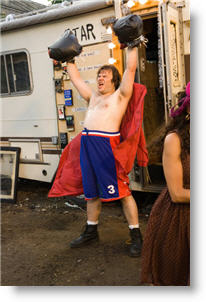 In 2004, director Michel Gondrey cast Jim Carrey to blur the lines of love and memory in his enigmatic film “Eternal Sunshine of the Spotless Mind”. Now Gondrey has cast Jack Black as loveable loser Jerry in his latest film “Be Kind Rewind.”

Jerry’s best friend Mike (Mos Def) is put in charge of a local New Jersey video store (by which the film finds its name), when the video store owner (Danny Glover) leaves town to settle a legal dispute. After a power plant accident, Jerry unknowingly becomes magnetized and erases all the VHS tapes in the store.

With Mr. Fletcher, the owner, out of town, Mike and Jerry have to find a way to replace all the video tapes that contain nothing but snow patterns. When a local patron (Mia Farrow) comes in and insists on renting “Ghost Busters,” the two decide to take advantage of the fact that she hasn’t seen it, by shooting their own home version of the film.

With Mike directing and Jerry taking the leading roles, the two go on to start their own franchise of remaking some of Hollywood’s most famous hits as well as reworking independent films. As they venture into more romantic fare, it becomes apparent they need a leading lady, so they elicit the help of a neighborhood girl, Alma (Melonie Diaz, “A Guide to Recognizing Your Saints”) to fill in the feminine rolls.

While Mike and Jerry try to keep the store open, Mr. Fletcher is spying on the mega-conglomerate store that offers DVDs and is driving Be Kind Rewind out of business. The David vs. Goliath story is a common theme throughout the movie. Mr. Fletcher is also battling with the city to keep the store in its historic location, while the city would rather tear it down to make room for a block of luxury, high-rise condos.

This style may be hard for some to embrace, however, his low tech special effects work perfectly in illustrating Jerry and Mike’s attempts to recreate some of Tinseltown’s golden epics. Of Gondrey’s films, this one is probably the most user accessible, as it doesn’t have the space-time continuum plot of “…Eternal Sunshine…” nor the mature subject matter of “The Science of Sleep.”

I noticed very little objectionable material. The only violence is when Jerry accidentally electrocutes himself, and this is done in a cartoon-like manner, and the fight scenes from the films that Jerry and Mike try to replicate, such as “Ghost Busters” and “Rush Hour 2”. There are only two instances of profanity, as the characters purposely choose to use colorful euphemisms rather than the typical four letter epithets that are used in most Hollywood pictures. One instance is when Jerry utters the ‘b’ word while quoting lines from the Bill Murray phantom-vanquishing character in “Ghost Busters.”

There are parts of this film that are exceptionally funny, particularly when Mike and Jerry are using a minimal budget to recreate scenes from movies that most viewers will be familiar with. The performances are good, particularly the supporting roles of Diaz and Mos Def. Jack Black’s typical over the top performance works well in the recreations.

Though there is nothing overtly offensive for Christian audiences, Gondrey is a unique filmmaker that works in a visual style that may not appeal to a general audience. Fans of Gondrey will no doubt enjoy this vehicle, that allows his characters to recreate these classic films. If you are willing to give your cinematic palette a little taste of something different, then you might be pleasantly surprised by “Be Kind Rewind”.

Positive
Positive—Be kind, rewind was probably the most original movie I have seen in a long time. While it is quirky like the clean scripted Napoleon Dynamite, it does have an “S,” and a “B” word like the review above along with a bit of toilet humor(bodily functions). Mos Def does use the name of our Lord once, but it is under his breath. Danny Glover talks of some sexually realted exploits including a comment on a body part… other than that? This movie is clean. One other thing that may be objectionable would be the way some characters mislead customers. This is also underplayed and no one is effected negatively. It is very nice to see movies like this can be made.

The movie itself goes at varying speeds. One moment you’re laughing out loud (in one scene I couldn’t breathe). The next it works on character building. I wouldn’t recommend it to younger teens and pre-teens as it may be boring at times for them. Overall, a neat little movie! Some may not get into it, but it is original, funny and a great premise! We don’t see movies at the theater very often so when we go, we don’t like to be disappointed—we weren’t! I wish I could say the same for the previews!
My Ratings: Moral rating: Better than Average / Moviemaking quality: 4½

Barrett Jensen, age 39
Positive—This was a cute movie that had a lot of laughs. I can only remember 2 mild curse words, and several places where there should have been a cuss word, by usually movie standards, and there wasn’t one. For instance, “what the ____,” was turned into “what the duck?” That was sweet, and Mos Def had a very enduring roll. Jack Black was just Jack Black and that can wear thin if you’ve seen him in several movies.

My husband felt the plot was too weak to give this a thumb’s up and too over the top in its humor to be believable. I thought there was enough laughs and I thought the plot was kind and thoughtful to all, that I would give it a thumb’s up. I would have taken my 12 year old daughter and still might except she may not get all the references to these older movies (i.e., “Driving Miss Daisy,” “Ghostbusters,” “Space Odyssey 2001”) an also there was one seen with Danny Glover where he used some vulgar terms to boast of sexual exploits he had when he was young. That was the only offensive part of the movie that I noticed.
My Ratings: Moral rating: Better than Average / Moviemaking quality: 3½

Lisa Shafer, age 42
Positive—Overall, this movie was a fun way to spend a couple of hours on a Saturday afternoon. Being a fan of Jack Black, a friend and I decided to give this film a whirl and were pleased with the result. The foul language was slim to none, and there was no nudity, which is hard to find these days. For parents, I would say this movie is appropriate for kids 14+. A lot of the younger crowd wouldn’t understand half of the humor or be able to follow the plot well. I do have to admit there wasn’t a lot of character development, and it seemed to move rather fast, but in the end it’s one of those movies where you just go and kinda have that in mind to begin with. Thumbs up in my book.
My Ratings: Moral rating: Better than Average / Moviemaking quality: 4½

Monique Hernandez, age 28
Positive—The opening is a classic homage to amateur films. It’s a montage of cardboard cutouts of 1920’s cars, moved by people to create the illusion of traffic. The token “fat guy” with a pillow stuffed up his shirt. The organ pipes being nothing but megaphones pointed towards the ceiling by a crew of extras. The story within the story is that of an ol' Jazz player by the name of “Fats.”

His tale is revisited several times throughout the film and makes more sense as the story unfolds. An accident wipes out all the vhs tapes at a store in a condemned neighborhood full of run-down tenements. Jack Black and Mos Def are the nbhd clowns that take it upon themselves to SWEDE the videos whilst the owner (Danny Glover) is away. SWEDE-ing is their act of refilming all the movies using minimum props, actors, and locations. Each SWEDE-ed video runs about 20 mins, but word spreads, and soon they’re a hot commodity. But the hood’s demolition date is invariably fast approaching, so the proprietors have to work fast reshooting movies in order to raise enough money to save their block.

Rewind is definitely an original story. It’s all about home movie making. Good laughs. Good times. For an aspiring filmmaker like me, it’s golden.
My Ratings: Moral rating: Better than Average / Moviemaking quality: 3

Jacob Keenum, age 21
Negative
Negative—I love Jack Black, but this movie stunk. It was irritately stupid and I wish I got my money back. It was so boring my teenagers were asking me, 'when can we leave!'

I had them watch the whole movie in hopes there were funny parts coming soon. I am Christian, but that doesn’t mean if the movie stinks I am going to give it a positive.
My Ratings: Moral rating: Average / Moviemaking quality: 1½

Carrie, age 40
Negative—This is one of the stupidest movies I’ve seen. I only watched it in entirety because it was on DirectTV and I’d paid for it, hoping it got better. Ending was OK, but not worth sitting through.
My Ratings: Moral rating: Good / Moviemaking quality: 2

Dick Waina, age 69
Comments from young people
Neutral—I’ve never really been a fan of movies that Jack Black has been in, but I read the review on this one and thought it would be different. Which it was—but not in a good way. There really wasn’t anything morally wrong with it, it was just extremely boring. Halfway through it I felt like falling asleep. It moved at a really slow pace, and I found the scenes where they were recreating the movies almost annoying. The only scene I laughed at was when Jerry came out with face paint, wanting to play the role of Fats.
My Ratings: Moral rating: Better than Average / Moviemaking quality: 2