for bawdy and suggestive humor, action and some language. 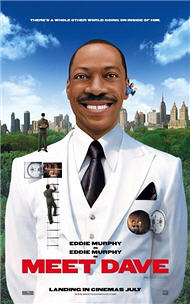 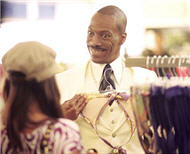 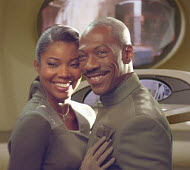 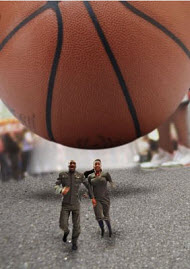 “There's a whole other world going on inside of him.”

Eddie Murphy helms the starring role as alien Dave Ming Chang in the amusing and family friendly movie MEET DAVE. Dave is actually the starship, a human sized replica of the miniature-sized Captain, filled with a miniature crew operating his every movement. Dave crash lands on Earth in New York City wearing a white disco-inspired suit and only a few days to recover an orb vital to preserve life on his beloved planet “Nil.” While on his quest, he becomes friends with Gina (Elizabeth Banks), a young, friendly mother and widow and her son, 11-year-old Josh (Austyn Lind Myers). Their friendship distracts the Captain from his mission and threatens to tear at the loyalty of his crew.

Murphy commands his crew from the head of Dave. The command central is similar to “Star Trek.” Ed Helms is convincing as the power-thirsty “Number 2” second in command. Gabrielle Union brings warmth and strength to her portrayal as the “Number 3” cultural officer secretly in love with the captain.

Most of the comedy comes from Dave trying to “fit in” in order to remain undercover. Murphy deftly displays his comedic range and control as Dave, with laugh-out-loud facial expressions and awkward body movements.

There is some bathroom humor throughout the film. In one scene, after scanning a $20 dollar bill, Dave is seen in a dressing room with no pants (only his calves are exposed) squatting slightly and money dropping out from behind him onto the floor.

Many Biblical themes can be drawn from this movie, but the most obvious parallel message is David and Goliath. Josh misses his father, a heroic naval officer, and laments on being the smallest fifth-grader who gets bullied constantly. He feels because he is small, he can’t do anything. Dave tells Josh, “You are not small. You are a giant.” He says that often the things that are most powerful in the universe come from a small source. The irony is that the Captain is really much smaller than Josh. In the Biblical account of David vs. Goliath, Saul thought David was too small and too young to fight Goliath. David’s confidence to face the giant was based on his relationship with God and God’s ability (1 Samuel 17:33, 36-37, 40-47).

Another interesting Biblical parallel comes from the space ship shaped like a body with individuals assigned their place in the body to make it function properly. According to 1 Corinthians 12:12-26 those who believe in Christ are baptized by the Spirit into the Body of Christ. Each member has an individual role. It is imperative that each member function in his or her specific role in order for the body to function properly. In the movie, Dave attempts to toss a ball to knock down three bottles in a game at a street fair. When he fails to come close to the bottles, the Captain asks for a report from the right arm. The person operating the right arm had gone to the bathroom and wasn’t in position to direct the arm.

Many children will relate to Josh’s character being small and feeling bad because he is different. They may also find encouragement through Josh’s growth in the movie.

I do not believe at any time the Lord’s name was taken in vain. There were less than five uses of profanity and the most obvious sexual reference was a couple kissing. The violence in the movie is mild and brief with no gore. Some of the crew working in the mouth of the ship do get drunk when Dave drinks an alcoholic beverage. Potential offenses are few, but some may not find it funny when (1) a crew members’ buttocks is partially exposed and (2) a crew member discovers his love for musical theater and “comes out” as a stereotypical flamboyant gay male. There is no reference to sexuality in this display, however.

Overall, I would recommend this movie for Christian audiences for ages eight and up.

Neutral—I don't understand how anyone who acknowledges that a movie has 5 swear words can recommend it to anyone. Offensive language isn't needed in movies, not even for realism. For those that say swear words are a part of their daily life I would suggest you hang around better christians. If we continue frequenting these movies and recommending them to others we become part of the reason they remain unchanged or deteriorate to worse levels of profanity or moral behavior. Our children start to believe that minimal amounts of profanity or immoral behavior are acceptable. Please, stand up to the little things or they will grow too big for us to destroy. I recently heard a song by Casting Crowns called “Slow Fade” in which they sing “People never crumble in a day.” We fall by making small compromises to our morals and values over time.
My Ratings: Moral rating: Offensive / Moviemaking quality: 4

Chris Ransom, age 42
Positive—I saw “Meet Dave” with my 8 year old, my 14 year old nephew, and my sister… we laughed and enjoyed every bit of it. There is a character that comes out of the closet, but it does not identify him as being gay. Many scenes can be related to Biblical principles. Overall, I would recommend it to others.
My Ratings: Moral rating: Better than Average / Moviemaking quality: 4