for strong bloody stylized violence throughout, and language. 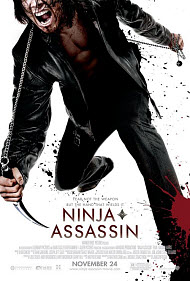 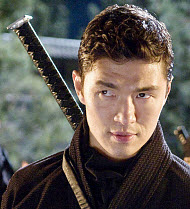 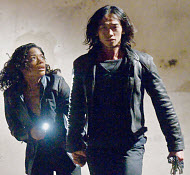 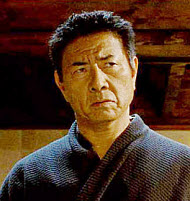 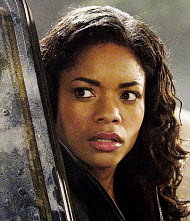 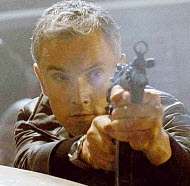 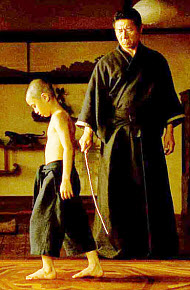 “Fear not the weapon but the hand that wields it!”

“Ninja Assassin” has plenty to offer in the way of killing-sprees, but not so much as far as being even slightly interesting or original goes.

The film follows forensic researcher Mika (Naomie Harris) as she tries to uncover the mystery of the Ozunu Clan, a secret society who transforms orphans into merciless killers. Digging too deep into their history makes Mika a target of these assassins, and she teams up with Raizo (Rain), an ex-assassin who escaped the clan and has been waiting to exact his revenge.

I have to be frank and say that “Ninja Assassin” was a pain to sit through. Despite the almost constant action and fighting sequences, I found the experience dull and uninviting. It was almost like watching a series of worn out jokes, and I found myself checking the time every several minutes to find out when it would be over. Just when I thought I was watching the climax, they found a way to keep it going, exhausting every scene thereafter—and robbing and battles of their “coolness.” Don’t get me wrong, I am normally one for a good action film. But this action was unrelenting and self-indulgent.

The very least they could have done was add a hint of humor to lighten the mood, play up on the fact that this could never actually happen. There were a few moments (and by few I mean, maybe two or three) that felt like almost jokes, but took themselves way too seriously. It seemed like the director, James McTeigue, wanted to show off his neat, new CG techniques (all of which are seen to their full potential), and paid no attention to characterization, plot, or the script—thus creating an overdone jumble of special effects and a chance for the Korean pop singer, Rain, to show off.

I doubt there is any way to relay all of the violence that occurs throughout the film. It is just too extensive. Some form of physical abuse takes place about every 5 minutes, be it child abuse (or Ninja training, as they call it), one-on-one fights, or larger scale battles, the blood and slicing of human life is relentless, and often times unimpressive. It felt like there was more blood than “300” and “Sweeney Todd” combined. The moments that stand out most as far gruesomeness is concerned, are the caning and downright torture of the young Ninjas, and Raizo’s first assassination of a man in a bathroom (they stab and bash each other into every surface possible). Beyond that, it is the recycled motion of swinging weapons, slicing limbs, throwing ninja stars, jumping over one another. Lather. Rinse. Repeat.

The swearing in the first scene is so intense with f-words, it seems incoherent and left me terrified that it might be this way for the whole time. Fortunately, the worst of it is unleashed early on. A total of almost 20 f-words, 5 s-words, and scattered variations of “ass,” “Christ,” and “damn” were the least of my worries.

Some good can be said of this film, or, at least, the characters—however one-dimensional they appear. Raizo is continually self-sacrificing, risking himself for Mika, whom he barely knows. They are both very trusting, and see something special in the other. Raizo says that “her heart is special,” and they do all they can to protect the other from harm. One shot in particular, of Raizo completely bloodied and torn, waiting for his enemy, reminded me of the sacrifice of Jesus Christ, and how he gave his life to save the lives he loved. The character of Kiriko (Anna Sawai) is a lovely young ninja who reminds Raizo he has a heart, and stands up to their master, refusing to cut her fellow student for the sake of a lesson. She is truly the best part of the film.

I could not recommend this film to anyone, if there were some redeeming factor. Though I’m sure any 20-year-old with a samurai sword on his wall, and no sense of story would have a decent time at the movies, “Ninja Assassin” remains plot-less and uninventive.

Neutral
Neutral—The first 10 minutes are filled with foul language, but I really don’t remember much being used past that point. So take your bathroom breaks and popcorn refills then! There are no scenes of nudity or of that nature that are really bad. It’s pretty much full on violence. While I don’t think kids should be allowed to view this movie, I think overall it is a good film. I don’t walk out of movies for violence, it’s not nearly as offensive as other material of a sexual nature. The Bible is a very violent book, I understand that we shouldn’t subject ourselves to unnecessary viewing of it. But I, also, don’t think we should spend too much energy avoiding it. If the Holy Spirit convicts you of viewing violence, do not see this movie.
My Ratings: Moral rating: Average / Moviemaking quality: 4

Matthew, age 18 (USA)
Neutral—I went to see this movie with my sister, her husband, my best friend, and his sister. The first 5 words are so in this movie are the f-word, and it is probably used around 20 in the first scene. After that not many swear words are used. I feel the director did this by trying to portray the japanese Yakuza (gangsters/mafia) truthfully and ended up going overboard. There are so many gruesome deaths in this movie that highly disturbed me. The body count is extremely high, and each one dies a painful death. However, the most disturbing deaths are the ones you only see the results of. Raizo is attacked by a woman in a laundromat, and when the owner goes to check on the noise, he sees a laundry machine churning red with blood leaking out the sides, leading you to believe that the woman’s dismembered body is in there.

Another such scene shows a man being gutted graphically, while hanging in the air, but they get away with it by showing it through a character who is wearing heat vision goggles. Being a fan of old B-movies with ninjas and such, I knew it would be bloody, but there is so much CGI blood you will not believe it. The story had good ideas, but it was smothered in the graphic and violent scenes.
My Ratings: Moral rating: Extremely Offensive / Moviemaking quality: 3½

Tim, age 19 (USA)
Negative
Negative—I do not remember the last time I walked out of a movie, but I walked out of this one after about 20 minutes. Unfortunately, since the movie came out on Thanksgiving I was unable to find any Christian reviews prior to seeing the movie. Yes, I knew it was rated R, which I see about once ever 10 years, but I had read that it was because of a laughable amount of blood. First, you will hear the f-word 20 times in the first 10 minutes. Second, there is so much blood that it is not even possible. Third, the only part worse than the cussing and the blood was the rest of the movie, which was awful. It was slow, it had no plot, it was filmed like a 1970’s B movie. Anyway, my recommendation is to skip it.
My Ratings: Moral rating: Extremely Offensive / Moviemaking quality: ½

Wesley, age 46 (USA)
Comments from young people
Negative—I watched this movie because I personally think that ninjas are cool. Obviously, I’m not a big fan of killing people, for any reason, but I do admire their skill and devotion to being "awesome". The whole movie was gory, boring, and pointless. The blood splatter was totally unrealistic (not that I know what it should look like), and you could barely see any of the actual fighting. It was just a bunch of somewhat asian "ha!"s, blood spewing randomly, and the occasional flashing of their weapons.

I find no reason to recommend this to any one. The only thing you’re going to get out of this movie is a bunch of un-realistic blood splatter. I’m almost ashamed to be a fan of ninjas because of what these people portrayed them as.
My Ratings: Moral rating: Extremely Offensive / Moviemaking quality: 1½

Katelyn, age 15 (Canada)
Comments from non-viewers
I took my 17 year old son to the movie, anticipating some level of violence given the title but hoping for just a good martial arts/action movie. After the first five minutes, which featured several gory beheadings and amputations, not to mention repeated use of four-letter expletives, I should have had enough. Instead we watched another 30 minutes, which involved repeated brutality and mutilation, especially against children, and we finally walked out--the first movie I’ve ever left early.