for a scene of sexuality/nudity. 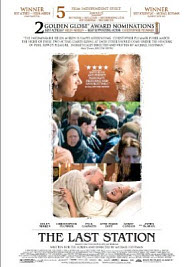 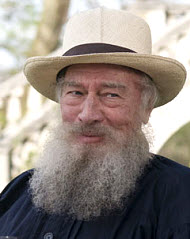 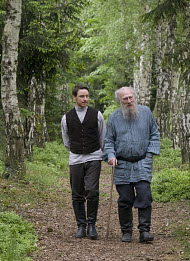 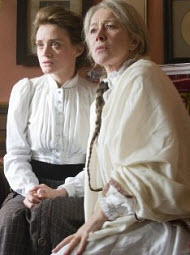 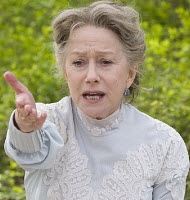 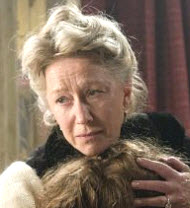 About Leo Tolstoy (Wikipedia article)
His most famous works include the novels War and Peace and Anna Karenina and novellas such as Hadji Murad and The Death of Ivan Ilyich.

Sermon on the Mount

“The one thing that is necessary, in life as in art, is to tell the truth” —Leo Tolstoy.

Ironically, the movie “The Last Station” does not tell the truth, in that it merges detailed facts about the very complex life of Count Leo Tolstoy (portrayed stunningly by Christopher Plummer) with fictitious scenarios depicted in the novel of the same name written by Jay Parini. While director Michael Hoffman (“The Emperor’s Club”) painstakingly portrays, with accuracy, the tempestuous relationship between Leo and his wife, Countess Sofya Tolstoy (impeccably recreated by the incomparable Helen Mirren), particularly in this final year of Tolstoy’s life; it nonetheless bends the truth about a few actual events and characters. He uses these characters to reconfigure the denouement, which is typical of Hollywood films, but sometimes necessary for biopics of this magnitude to be tolerated by moviegoers. Nonetheless, this breathtaking period piece (a la “A Room With a View”), with its meticulous set design, outstanding art direction, stunning costumes and its excellent cast of actors, has all the drama and life that any movie fan could want in a film, although one might argue that additions were not necessary to tell this grand story.

Having some understanding of who Leo Tolstoy was, as a man, and being familiar with his writing is not required, but recommended, in order to fully appreciate this film which easily became one of my favorites when I saw it in the theaters the first time last year. Like so many others, I was required to read War and Peace in college literature class, which later prompted my reading of Ana Karenina, both unforgettable books and ones that perfectly lay out the backdrop for a deeper understanding of this challenging character study of the Count in “The Last Station.”

Leo Tolstoy grew up in Czarist Russia, a child of privilege, a prince among the aristocracy of the ruling class, surrounded by serfs and peasants who sustained the family estate and helped form the foundations of his guilt-driven compassion. This internal struggle would later become the catalyst of his so-called “Christian conversion,” one about which he wrote extensively in his later life, and which became the basis of the renowned Tolstoyan reform movement of non-violence and Christian service.

Zoom the lens of the camera to the final year of Tolstoy’s life and enter stage left, Vladimir Chertkov (played by the loquacious Paul Giamatti), a confidant of Tolstoy’s, who, as head of the Tolystoyan movement, desired for Leo to leave his estate and the copyright privileges of his books to the movement, and thus ensure its legacy and all of Tolstoy’s ideals. Enter stage right, the Countess Sofya (Mirren) who was fighting to maintain control of everything to guarantee and safeguard the future of herself, her children, and their posterity—actions all expected of a mother of her caliber. Also in the picture is Valentin Bulgakov (James McAvoy) who is the planted spy of Chertkov, but true devotee of Tolstoy who is sent in to fulfill the role of Leo’s personal secretary while keeping an eye on the activities of the Countess, lest she outsmart him and thwart his plans for the Tolstoyan movement‘s inheritance.

Bulgakov is a real historical figure, but it is here that the poetic license I mentioned above is inserted by Hoffman to introduce a character named Masha (Kerry Condon) who he meets at the nearby Tolstoyan commune. This young, virile Bulgakov, who is practicing the celibacy that Tolstoy espouses, eventually gives in to his feelings toward Masha, and a young and spirited relationship between these two lovers becomes the secondary plot running counter to the examination of Tolstoy’s life-long turbulent marriage with the Countess. It is a great juxtaposition, and one I am certain Jay Parini must have thoroughly explored in the novel. (Full disclosure here, I have not read the book.)

Objectionable Content: There were no memorable profanities of which I can recall, but the intense romance between Bulgakov and Masha blazed the screen with their fornication, revealing breasts and simulating intercourse, in scenes where imagination could have sufficed, and dialogue could have intimated, and no “exposed flesh” would have been necessary. It is because of this scene alone, that caused me to deny the “better than average” moral rating, which is unfortunate, since the rest of the film had so many positive aspects on so many levels. Whether it’s insecurity on the part of a director (to ensure an audience) by always having to include a sex scene, I am not sure, but “The Last Station” falls prey to this common mistake—in the opinion of this reviewer.

There are numerous subplots built in to this wonderful film, beyond the likes of privilege vs. peasant, young love vs. aged love, career vs. family, legacy vs. posterity, and personal responsibility vs. conformity. There are also the grand historical elements. Clearly, “The Last Station” is a precursor to the fall of Russia, and it clearly sets the stage for the advent of Marxist ideals to take root in a pre-Soviet world which would, sadly become a Stalinist regime. It has overtones that apply to United States today, where capitalism is being called into question, with the government standing by in the wings, like Chertkov, ready to take its inheritance—all in the name of the common man. Is history repeating itself, or is this the dialectical materialism that Marx and Engels wrote about, coming to fruition?

I, for one, have been challenged, as a result of seeing this film, to go on to read some of Tolstoy’s final works this summer, including his most popular non-fiction work, The Kingdom of God Is Within You, just to see if Tolstoy’s writings ring true to the heart of the Christian message. I had always assumed his Christian conversion was thorough and complete, based upon writings and papers I have read previously. I certainly hope so, but “The Last Station” brought out some interesting details that have made me wonder. “The Last Station” really does become an engaging and thought-provoking metaphor for all of us living today. We, too, are in the last train station—so to speak—just before our departure to whatever lies beyond the veil. The question remains, what will be our final destination?

Are you good enough to get to Heaven? Answer—How good is good enough? Answer

It is interesting that I have reviewed two films that have come out on DVD so closely together, that both have such remarkable similarities, and not just because they are set at the same time in history. This one (“The Last Station”—about Tolstoy) is set in 19th century Russia and the other (“Creation”—about Darwin) is set in 19th century England. Both men are seemingly carried away by great events in history, almost out of their control. It is with this quote from War and Peace, by Leo Tolstoy himself, that I would like to end this review as food for thought:

“In historical events great men—so-called—are but labels serving to give a name to the event, and like labels they have the least possible connection with the event itself. Every action of theirs, that seems to them an act of their own free will, is in an historical sense not free at all, but in bondage to the whole course of previous history, and predestined from all eternity.”

Negative
Negative—…carnal, intensely cynical approach to innocence, beauty and God. Christians who hold to Christ’s teachings on chastity and self control and love of their heavenly God above all things will run smack dab into this movie’s underlining message that sex is merely an act all humans must enjoy regardless of your spiritual convictions. THIS FILM MOCKS religious convictions. And it is smug. …a film… wrapped carefully in fine white linen and high minded airs, yet really a trojan horse of hedonistic, epicurean humanism… SINGLE CHRISTIANS have to deal with this kind of hedonism mindset even more so today in this climate of post modern, cultural relativism. …
My Ratings: Moral rating: Very Offensive / Moviemaking quality: 4