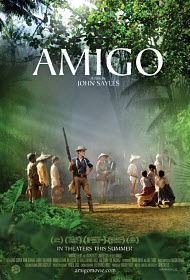 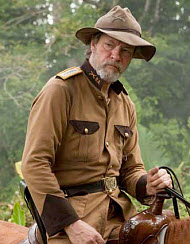 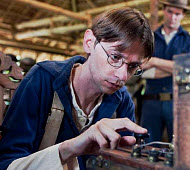 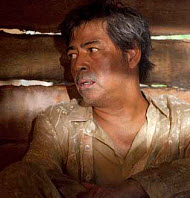 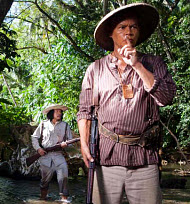 “The heart remembers what even history forgets.”

Here’s what the distributor says about their film: “a film by John Sayles / A fictional account of events during the Philippine-American War.

AMIGO, the 17th feature film from writer-director John Sayles, stars Joel Torre as Rafael Dacanay, a village mayor caught in the murderous cross-fire of the Philippine-American War in 1900.

When U.S. troops garrison his village, Rafael comes under pressure to collaborate from the blood-and-guts Colonel Hardacre (Chris Cooper) as he tries not to betray his people. But the situation is complex. Rafael’s brother Simón (Ronnie Lazaro) is the head of the local Filipino guerillas, and considers any concessions to the Americans to be traitorous. A devious Spanish friar (Yul Vazquez) is charged with translating, but thwarts communication with his spiteful intrigues. A sympathetic American lieutenant (Garret Dillahunt) begins to learn that “hearts and minds” cannot be won at gunpoint.

Rafael is forced to make the near-impossible, potentially deadly decisions faced by civilians in an occupied country. Friendship and betrayal, romance and heart-breaking violence, AMIGO is a page torn from the forgotten history of imperialism and a mirror of today’s unresolvable conflicts.”

John Andrews, age 58 (USA)
Movie Critics
“…‘Amigo’ is not a simplistic parable of diabolical colonialists and their innocent victims. … ‘Amigo’ is a well-carpentered narrative, fast-moving and emphatic, stepping nimbly from gravity to good humor. …”

A.O. Scott, The New York Times
“…John Sayles tackles imperialism, racism and war in a film centered on the Philippine-American War. … the contemporary resonance of this portrait of racism and war, however obvious, is fully felt.”

Sheri Linden, Los Angeles Times
“…Sayles has always had to work cheaply, but for the first time, the cheapness shows. The ‘vast’ jungle never looks much bigger than an acre or two; the massive U.S. Army seems to operate out of a bare office, and a tent. The picture is small, and cramped. But its people, and its ideas, aren’t. They’re big enough to still deserve some careful consideration. …”

Stephen Whitty, The Star-Ledger (New Jersey)
“…overlong… preachy drama about the 1900 conquest of the former Spanish colony of the Philippines by the United States… [2/4]”

Lou Lumenick, New York Post
“…A complex political statement, ‘Amigo’ is epic in scale but trades the schmaltz of the traditional war film for a more resolute treatment of subject. The themes, characters and plotlines are hefty and resonant, and writer/director John Sayles treats each with sensitivity. …”

Barbara Goslawski, Boxoffice Magazine
“…Good looking, atmospheric and steeped in the culture of the rural Philippines of the time… Sayles depicts the young U.S. soldiers as a rough and tender mix, with most having learned to demonize the enemy even as the Filipinos they meet turn out to be friendly and cooperative. …”