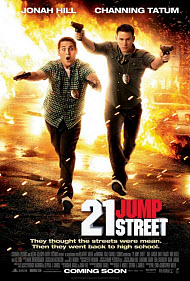 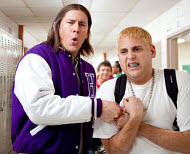 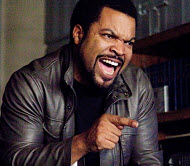 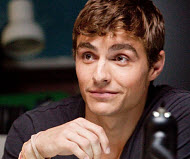 “They thought the streets were mean. Then they went back to high school.”

Channing Tatum and Jonah Hill star in the remake of the four-year television series of the same name. It doesn’t stay that faithful to the original show, but it has cameos from some of the former actors and a fast-paced plot.

Jenko and Schmidt used to be enemies in high school, but fresh graduates of the police academy they’re bored bike patrolling a park. When failing to read a criminal his Miranda rights, they are sent to 21 Jump Street to begin an undercover operation to find out who has been making and dealing a new drug at a high school.

There are numerous scenes of fistfights and gunplay. The gunshot wounds are quite realistic and bloody. One guy gets shot through the neck. A man is shot in the groin, resulting in a part of his privates falling off. He then tries to pick up the detached piece with his mouth, when a police officer refuses to help him.

The base for the undercover operation takes place in an abandoned Korean Christian church. When the police captain (Ice Cube) addresses the policemen, he stands behind the pulpit, as if a real preacher and begins to speak, using “mf” repeatedly. Before going undercover, Schmidt prays to the “Korean Jesus” and curses a few times during his prayer. When overhearing, the police captain says not to bother “Korean Jesus,” since he is too busy to listen to Schmidt’s “sh_t.”

Schmidt appears unsure in his prayer, even admitting to not knowing if Jesus existed. Prayer is essential in the daily walk for believers of Christ. Faith is required (Matthew 21:22). Not only faith, but also confidence. During a Bible study, I remember a comment that was made about God answering all prayers, either by silence or by action. If what we pray for doesn’t occur, then His silence confirms that it wasn’t in His will. In 1 John 5:14, he wrote:

“This is the confidence we have in approaching God: that if we ask anything according to his will, he hears us.”

Channing Tatum and Jonah Hill make a humorous duo, and I hope that they collaborate again, albeit in a cleaner film. I recommend that Christians completely skip “21 Jump Street”. It isn’t suitable for our commanded narrow walk (Matthew 7:13).

Comments below:
Positive
Positive—WARNING: This movie is EXTREMELY offensive. It is filled with F-bombs, innuendos, and graphic violence. That being said, if you can take it and realize that i’s just a movie, “21 Jump Street” is absolutely hysterical, well-written and well made. I don’t think I’ve had so much fun at the movies in years. Those who were fans of the original series, such as myself, can appreciate it just as much as any new fans, due to the references, self-deprecating humor and cameos.

I’ve seen it 3 times already (2 were press, then saw it again with a group at midnight). I am a Christian and would never behave the way the characters in the film do, but it was certainly a fun and entertaining film to watch. It was also better (morally and comedy-wise) than “The Hangover.” If you enjoy the occasional R-Rated comedy, give this one a try. You won’t be disappointed-but know firsthand what you’ll be getting yourself into.
My Ratings: Moral rating: Extremely Offensive / Moviemaking quality: 4½

Jess, age 24 (USA)
Positive—Let me start off by saying personally, and sadly, due to the work environment I’m usually in, I’ve been desensitized by language, so I recognize that I probably didn’t find it even half as offensive as most would find it. Remember to keep this in mind whilst reading my opinion of this movie. As far as offensive content goes, the reviewer pretty much nailed it with the language count, violence, and such, so there’s no real debate in that regard. I can honestly say it earned it’s R rating here. No children allowed in this movie.

What do you get when you look past all the language? You get a pretty decent story of how two polar opposites can actually bond together. Let me start this section off by saying, Channing Tatum, you surprised me here boy. Even though I hated his performance in G. I. Joe, after seeing him perform well in this film, I’ll chalk that last one up to the director. Tatum and the now slimmed down Jonah Hill make one of the funniest pairings I’ve seen in a while. Seeing them deal with the situations dealt at hand feels so natural, and you really believe you’re seeing two polar opposite cops deal with a real situation.

So the two main stars did well, how did the film itself do? I rated this a 5. It takes so much to get a rating like that from me, and this film did it. Personally, it takes something truly funny to make me more than smirk, and this movie made me laugh out loud several times. Everything is so well done in this movie, it made me want to make a comedy film myself taking inspiration from this film (minus language of course). The framing, dialog, and timing is near perfect, and they even manage to poke fun at some classic action scenes, such as them shooting at something that in most movies would explode, only to have it not explode, and Tatum and Hill scratching their heads saying, “I really thought that would explode…”. There’s even a cameo for those who appreciate the classic TV show, and the way the cameo’s done is also hilarious.

Essentially, if you want a good time, and language doesn’t bug you, give this one a go. If you’re offended by language, best stay at home.
My Ratings: Moral rating: Average / Moviemaking quality: 5

Ricky, age 19 (USA)
Positive—I don’t think this movie is as offensive as everyone says. Compare this to other Jonah Hill movies, “Super Bad,” for instance. The movie had a few sexual references, however, no nudity. Strong language used frequently, but no uses of c**k OR c**t. I have never laughed so hard during a movie, ever. And then ***SPOILER*** seeing Johnny Depp at the end just made it a hundred times better. I suggest the movie, but if you are deeply offended by language, don’t see it. Don’t boycott it. After all, it is just a movie filled with non Christians who know not what they say or do.
My Ratings: Moral rating: Very Offensive / Moviemaking quality: 4½

Jason, age 55 (USA)
Negative
Negative—I found nothing good about this movie. There was so much vulgarity, foul language, etc., in the entire movie, that it took away from the few funny lines throughout the movie. Ice Cube was using “M_____ F_____” even in the so called church. The only reason I gave it one star is because there were cameos by Johnny Depp and Holly Robinson Peete. I would not take my children nor recommend any Christian go and support this film. I went based on reviews from one of my favorite critics on TV. It was a huge mistake. Don’t waste your money. Ungodly.
My Ratings: Moral rating: Extremely Offensive / Moviemaking quality: 1

Yvette, age 50+ (USA)
Negative—This movie was the worst I have seen in many years. I was expecting some sort of newer version of the show in the 80s. I was largely disappointed and disgusted. It is completely insulting of the original “21 Jump Street.” It does a very good job to corrupt the minds of our youth. It is inappropriate for anyone, especially those that walk with the Lord. I walked out.
My Ratings: Moral rating: Extremely Offensive / Moviemaking quality: 3

Donna, age 45 (USA)
Negative—This movie was not worth seeing. No matter how desensitized you may be to the world, I don’t think it is helpful for any Christian to sit through the 2 hours of heavy profanities, blasphemy, sexual innuendos, nudity and violence. There were a few clean, funny moments, but definitely not enough to make it worth seeing. There was probably about 10 minutes in the whole film where I was not cringing from the swearing, blaspheming and sex.
My Ratings: Moral rating: Extremely Offensive / Moviemaking quality: 3½

Annalee, age 22 (Australia)
Negative—…This movie is straight out of hell, for sickening vulgar, disgusting, sexual language, more M… F’s than you could count. My wife and I are Christian and ashamed that we stayed as long as we did, we left about 40 minutes in, because of the type of “everything” that our Lord hates. I hope Tatum never makes a movie like this again, I liked all his up to this one. Christians, Never, Never, expose the Holy Spirit within you to this type of sick movie.
My Ratings: Moral rating: Extremely Offensive / Moviemaking quality: 3

D. Hobbs, age 61 (USA)
Negative—My wife and I went to see this thinking it was going to be like the TV shows. The plot was good, however we did not like the constant use of terms for intercourse or God’s name in vain. Although one slang term for a penis was used several times, while two other terms were used a couple of times, and two terms for testicles used often, I do give this movie credit for not using any slang terms for female anatomy. They did use the proper term I think three times, but, at least, they only used the slang terms for male anatomy.

We would have given this movie an extremely offensive rating had they used any slang terms for women, as we believe women should have more respect. Although a woman was threatened and used as a human shield by a male again, at least the only deaths in the movie were male (I think 8 males were killed in the movie), which I think is far better than having women being killed. They did have several males who were hit in the testicles and one who had his penis shot off which they showed laying in the street. I do think males should respect women far more than most of us do, and I do appreciate that this movie did not treat women with as much disrespect as they did the males.
My Ratings: Moral rating: Offensive / Moviemaking quality: 3

Joshua Loe, age 16 (USA)
Negative—I really wanted to watch this film as I had heard from people it was really good, but I didn’t even see all of the first ten minutes. I don’t usually turn films off, but this was littered with swearing of every kind. Seriously, I’m pretty sure that not even a sentence went by with out a swear word. If it hadn’t had all that then yeah the first ten minutes would have been really funny, but it did have all that swearing and completely ruined the film so that I turned it off. Real shame as it looked so funny, I would NOT recommend this film to anyone.
My Ratings: Moral rating: Very Offensive / Moviemaking quality: 3

Connie, age 16 (United Kingdom)
Positive—A really funny movie—laughed every time and the situations they were in made me laugh even harder. I’m not offended by these type of offensive movies or profanities, including the lord’s name in vain; I am a Christian, but overall I loved the movie.
My Ratings: Moral rating: Offensive / Moviemaking quality: 4