for terror/frightening images and some sensuality. 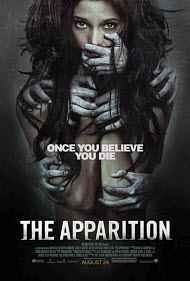 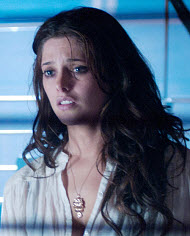 “Once you believe, you die”

The year is 1973. On May 21st of that year, according to the information at the beginning of the film, “paranormal psychologists tried to contact a recently departed colleague, Charles Reamer. Today, it is known as the Charles Experiment.”

Flash forward to the present. Ben, one of the original university students who helped perform the experiment, and his girlfriend Kelly, start experiencing some paranormal activities occurring in their home. Ben later receives several emails from another student, Patrick. One of the emails contains a video clip of another experiment, by the remaining students, to restrain and potentially get rid of the paranormal entity. They contact Patrick who agrees to help Ben and Kelly dispose of the entity. However, they are about to find out that the entity is not going to leave without a fight.

Like I said, the moviemaking quality is not very good. I was not impressed with what I saw. I have reviewed other horror movies, such as “Chernobyl Diaries,” where there were some genuine scares, but also fell short in some areas. Were there some genuine scary moments in “The Apparition”? Yes, I suppose (though those were few and far between). Were there moments where I found myself breathless? Yes. However, one category this film is supposed to fall under is “horror,” but there was little to no horror to be found. This film falls more under the “thriller” category, which is nice but is not what I was looking for. I wanted to be scared out of my seat, but, for the most part, all I felt were some jumps and “whoa” moments, and that’s not enough to warrant a recommendation from me, especially if it falls under the “horror” genre, in addition to the “thriller” genre. In addition, there was very little character development. Main characters disappear too quickly for us to get to know them, and, for this reviewer, it ruined my appreciation for the film. Some of the music, I felt, was a little annoying and didn’t fit the genre. The acting is also not what it could have been, especially from a director like Todd Lincoln. Overall, I was disappointed.

Violence/Terror: For the first forty-five minutes, there are mainly scenes that cause jumps and brief moments of fright, but that is the extent of the horror. However, there are several genuine, more intense frightening moments in this film that should be mentioned. One of the university students is attacked by the paranormal entity. Later in the film, we see the rest of the video clip from the experiment and notice the university student who is attacked by the entity dissolving into the wall. There are several scenes where the paranormal entity attacks Kelly and Ben. There is a climactic scene of terror. Lastly, some of the main characters, towards the very end of the film, are “taken.”

Sex/Nudity: At the beginning, Kelly is seen in very short pajama shorts. There are a couple scenes where Kelly is seen undressing (one in which she takes off her shirt to reveal her bra and one in which she is completely nude in a shower, though the camera points at her through a white, semi-see-through shower curtain). Later, we see shots of Kelly showering, up close (no genitals or breasts are show), and we see her washing her shoulders and back. After Kelly has finished showering she is shown in a revealing nightgown. Lastly, while walking in a sporting goods store, Kelly and Ben look at a tent. When Ben mentions they would never use it to sleep in, Kelly replies, “Who said anything about sleeping?”

Other: There is a scene where the paranormal psychologists perform some sort of séance. The university students may have appeared to reattempt the séance, though it is unclear if this was the case.

It is difficult to determine whether or not there are genuine lessons to draw from a film like this. However, the movie primarily deals with paranormal activity and “life after death.” At one point in the movie, Patrick is heard talking about how these “entities” are stuck in purgatory and wish to reside in our world, to have what we have, and will stop at nothing to achieve this goal. The Bible teaches quite the opposite. The Bible tells us that, when we die, we will be judged by God and his son Jesus, where it will be determined whether our destination will be Heaven or Hell. Those who love and believe in God and his Son Jesus Christ will receive their heavenly reward and enter the Kingdom of Heaven. This is what the Bible teaches us.

Before I began watching the actual movie, I saw an advertisement for Warner Brothers. The advertisement talked about how Warner Brothers was celebrating their 90th anniversary in the filmmaking business. After 90 years of moviemaking (and having Warner Brothers just finish their success with the Harry Potter films), I was expecting a little bit better from “The Apparition” then what I received. I suppose Hollywood is running out of ideas to scare people (without reaching the point of extreme terror, such as in the small film “VHS”). It’s a shame. Even with a higher moviemaking quality, I still wouldn’t recommend this movie to Christians or children. Its message does not promote Christ in any way. All I can say is, “Keep trying Warner Brothers.”

Positive
Positive—…You can find more nudity and suggestion in local channel, primetime TV than is found in this movie. The language, nudity and violence were very, very mild. The plot to the movie is very weak, but as far as scares, it actually worked for me, despite the lack of plot. I’d say this is a “scary” movie that the family can watch together (excluding small children who might find any ghost movie too much).
My Ratings: Moral rating: Better than Average / Moviemaking quality: 3

Brent Simon, Screen Daily
“…the script feels garbled and glued together… The trailer is scarier than the movie. [1½]”

Kathrine Monk, National Post
“If you listen closely enough while things go bump in the night during ‘The Apparition,’ you might also hear the scraping of barrel bottoms. This enervating muddle of paranormal nonsense manages the difficult feat of seeming frenzied and lethargic all at once, while building toward the sort of ludicrous cop-out climax that often incites die-hard genre fans to shout rude things at the screen. …”

Joe Leydon, Variety
“…worse may be The Apparition's absolute insistence that there is no spiritual hope at all… for anyone. …”