for sci-fi action violence and some disturbing images. 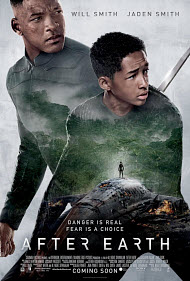 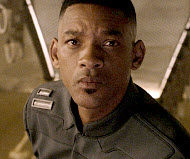 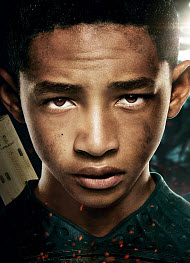 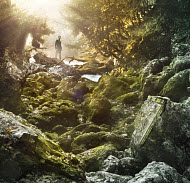 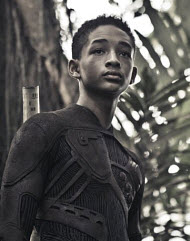 death of a family member

“Danger is real. Fear is a choice.”

Even before its official release date, “After Earth” was already being pegged as one of the worst films of the year. And though I try to avoid reading reviews for movies I’m assigned, news sites showed no mercy in bashing the collaboration of Will Smith and M. Night Shyamalan. Well, I say to ignore those critics! Though definitely not a member of the stellar movie club, “After Earth” is still enjoyable, if one watches it for what it is: a simple story of a boy’s journey in conquering his fears in front of his stern father’s eyes.

In the future, Earth is destroyed by pollution, and the humans are forced to leave. They find refuge on another planet called Nova Prime; inhabiting this new place does not come easily, since the planet’s creatures can detect humans by sensing their mortal fear. The ruthless monsters utilize this ability to track down and kill humans.

In an attempt to bond with his estranged son Kitai (Jaden Smith), Cypher Raige (Will Smith) invites the teen along for one of his routine trips to another planet. After encountering an asteroid storm, they’re forced into a crash landing on the now primitive Earth. With the plane broken into two sections, the emergency beacon from the second part of the plane must be retrieved. Due to massive injury, Cypher is unable to travel the treacherous distance, and now Kitai must embark on the journey himself, with his father only being able to aid him by voice.

There isn’t much more to the plot. Perhaps the movie’s flaw was using an enormous budget to relay a rather straightforward story of a father and son bonding through dire circumstances and overcoming a misunderstanding from the past. We aren’t given much information on Nova Prime, the futuristic culture, or government. Aside from this, the movie does well in showing the different trials through which Kitai suffers.

The relationship between Kitai and Cypher isn’t perfect: there’s intimidation, lying, disobedience, but much is learned. Kitai’s disregard for his father isn’t completely far fetched, considering how he thinks his father feels about him (Ephesians 6:4). And though Cypher can be rather harsh with his son (Proverbs 15:1), he’s also honest and gives Kitai objective guidance.

There is one use of “d_mn” and 1 or 2 “OMG”. There is only a brief narrative of humans destroying Earth and how the animals on Earth have now “evolutionized” to kill humans.

However, there is quite a bit of violence, which might scare younger children. Several men are shown impaled in trees. The monster is able to sense fear, so its chasing and attacking Kitai is intense. Kitai is shown stabbing the creature several times. During a flashback, a character is stabbed through the chest by a creature; this is shown only by a shadow. Some dismembered monkeys are shown in a pile; Cypher does surgery on himself to reroute a ruptured artery. During a dream, Kitai quickly sees a partially decayed face. Kitai has a severe allergic reaction to an animal bite, and his face gets grotesque and swollen.

If you’re looking for a decent action flick with low objectionable content, I recommend “After Earth”. Strong after-movie discussions can occur on the importance of bravery and faith when one faces seemingly impossible tasks (Matt 19:26). Families can also discuss the value of being honest, respectful, and what Scripture says about fear (Psalm 27:1/Psalm 56:3-4). A very loosely connected parallel could be made when King David told his son, Solomon to not fear building the temple, since God would be with him (1 Chronicles 28). I cannot imagine how daunting a task that must have been for the future king of Israel.

Positive
Positive—I loved this movie. There were so many things in it that could be related to what the Bible teaches about fear and how we overcome it. I am thinking about going to see this movie again.
My Ratings: Moral rating: Excellent! / Moviemaking quality: 5

Deberal Williams, age 56 (USA)
Positive—“After Earth” is a very good movie. It is so refreshing to see an action movie with no profanity or sex at all. The violence is also pretty tame. There are some scary looking creatures that might be too much for younger kids to handle, but nothing graphic like in most movies today. The film also shows how a father and son depend on each other in order to survive. Will Smith and his son Jayden are the two main characters. There are some other minor characters, but this is basically a 2 character film.

If you like action packed special effects movies, you will be bored. The film moves at a slow pace, but I recommend this film for people who like good drama.
My Ratings: Moral rating: Better than Average / Moviemaking quality: 3½

Joseph Gambone, age 48 (USA)
Positive—Saw this movie last night with my wife. I consider this one of those movies that you can watch with out having to experience constant foul language, nudity, and political agendas. Although there is one mention of Evolution, it is in a very small context as to how dangerous certain animals have become over time and not offered as an explaination of where humans came from. I am always entertained by Will and his little boy like in thier movie “The Pursuit of Happiness.” They are both looking older in this film and provide good entertainment the whole way through. Will's role is a strong father type (something that is endangered these days).

His son's role is a young boy trying to become a man and over come some past family issues. There are loud abrubt scenes off terror that are not appropriate for younger kids. There are scenes of dead bodies, and scenes of humands being violently killed. There are animals [creatures] that are very aggresive scary. Something iI loved were the special effects and beautiful scenery. I love movies like “Avatar” and more recently “Oblivion” where the scenery is out of this world. and this movie has a lot of that. Just my deal I guess?

If you are looking for a good movie that will entertain you and not make you want to wash your ears and eyes out after it's over, this is a pretty good one. It is not a blockbuster by any means but it is good and worth your time and money. This is one of the few films I will own when it comes out on DVD.
My Ratings: Moral rating: Good / Moviemaking quality: 4½

Gino S., age 46 (USA)
Positive—Discernment. It’s a finely developed skill, not a knee-jerk reaction. I believe a Christian dad will give his child a wholesome upbringing if the dad consistently can identify the good elements in any of life’s experiences, without completely rejecting something just because it may contain elements of error. This movie is a prime example of the principle above. While the majority of Christians may accept the Bible’s account of Creation, this movie does mention macro evolution. But for post-movie discussion, remember the movie is science fiction. And furthermore, the mention of the evolution topic does offer the parent the opportunity to discuss their beliefs in the Bible’s account of creation.

The movie strongly highlights the need for dads to have a relationship with their kids. In fact, this relationship is the entire core of the movie… it is set in a very cool high-tech futuristic and then scary scenario, but the relationship issues are the same.

For that reason, I think this movie is excellent. It is fun to watch, yes moderately scary at moments, but it tells a good story well.
My Ratings: Moral rating: Better than Average / Moviemaking quality: 4½

Spencer, age 33 (USA)
Positive—For an action film, this movie is certainly worth watching. There is no language that I remember, and there’s a healthy dose of suspense. The main objection that I have is the E-word. Will Smith says (even in the trailer, so this isn’t a spoiler) that “everything on Earth [had] evolved to kill humans.” This is obviously fiction, since the Bible tells us that this Earth will be destroyed by fire, and despite the fact that there had apparently been no humans left (perhaps because they’d all been killed, but I don’t remember if that was stated) on the Earth for the beings to have evolved to kill.

Also, the time frame given in the movie was much less than what evolutionists believe (and it is a belief) was necessary for macroevolution (from one species to another—which has never been anywhere near conclusively shown) to have occurred. Evolutionists have no explanation whatsoever where the simplest living cell (still more complex than our most complex computers) came from.

If you are a college student intent on going to medical school my advise would be to just filter the biology professor’s constant references to evolution as “science,” as if it’s repeatable (as in scientific method) like dropping your pen to prove gravity and get as many A’s as possible. There are incredible weaknesses with this hypothesis the professor will not bother to bring up. If you’re on more equal ground with the evolutionist, you can easily challenge them.

Anyway… Even the fiction is a little “out there,” like the fact that the father and son were the only (and relatively uninjured at that) survivors of a crashed space ship, but I tried not to look to hard for other discrepancies and did have a good time. The Bible tells us that fear is not even a choice, so I guess even there (also in the trailer) Smith kind of falls short. Overall, though if you’re into action/drama movies, your time will not be wasted, despite the E propaganda. When dealing with Hollyweird, a Christian is unlikely to view any film with absolutely nothing objectionable.
My Ratings: Moral rating: Average / Moviemaking quality: 4

Bob C, age 49 (USA)
Comments from young people
Positive—This is a good movie but not for kids under 13. Scary animals that make some parts jumpy.
My Ratings: Moral rating: Average / Moviemaking quality: