for crude and sexual content, drug use, language and comic violence. 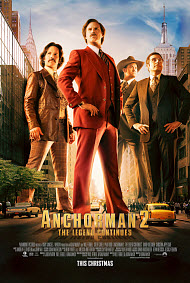 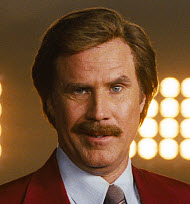 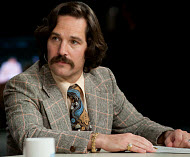 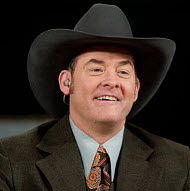 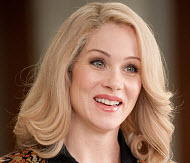 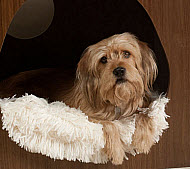 losing child due to divorce

use of illegal drugs

Anchorman 2 takes place several years after the occurrences of the first film. Ron and his co-anchor and wife, Veronica, are now happily married and have a young son, William. Things seem to be going well in their careers, but not so much at home. Ron forgets to spend time with William and take care of his responsibilities as a father; matters in this area only get worse when Veronica is offered a nightly news anchor position on national television—and not Ron (let’s say he’s a little competitive).

Time goes by, after Ron walks out on his wife and son, and he is offered a job working for the newly-developed GNN, a news station that broadcasts news 24 hours a day. Ron says he will take the job as long as he can have his news team back together. After searching across the country for his former team, the gang is brought back together for yet another adventure in the lives of these four broadcasters.

I had the chance to catch a double feature of the Anchorman movies, having never seen the first. I had figured this would be better for my overall reviewing process and would allow me to see the first and the second film together and compare them side by side. I’ll admit that when it comes to films with Will Ferrell in it, it’s a hit or a miss with me. In some films (like “MegaMind” or “Elf”), his humor is light and rarely offensive to one’s eyes and ears, and then there are others (like the 2005 remake of “The Producers” or even “Anchorman: The Legend of Ron Burgundy”) where you wonder why, exactly, you just spent the last two hours in a theater set.

This, unfortunately, is where Will Ferrell’s filthy, yet oddly accepted in today’s world, humor comes into play (I assume he had quite a bit of say, considering he is a producer for both films). While the first Anchorman film, to me, felt like Ferrell’s humor was crude and uncalled for, those moments were easier for me to overlook… mostly. The second film, however, went even further in crass, crude humor, to the point where I had to draw the line and say, “That’s too much.” As I walked out during the credits, I had to question whether all this was necessary and to whether the MPA should’ve given this sequel a strong R rating (if you read the content section, you will understand why I say this could’ve been a distinct possibility).

Please be aware that the content I have presented below is graphic, and I would only suggest reading if you are really interested in seeing this sequel.

Profanity/Sexual Language/Sexual Content: Somewhere between Heavy and Extreme. This is where caution is advised. There are tons of penis jokes, racial jokes, female privates references, transvestite references, sex jokes, and PMS. There is a close shot of Veronica’s butt, a reference to “breasts,” a scene involving sexual harassment, masturbation conversations, pornography comments, jokes about homosexuality, a comment about Jews, a condoms scene and a drug scene. There is also a sex scene between Ron and his new female boss. The list goes on, but I would rather not go into any more detail. There is also a prolonged scene where Ron is meeting an African American family and, to “break the racial barrier,” he starts speaking and making fun of their language in a stereotypical manner (including drug references). In addition, there are negative references to learning disabilities and poop.

Violence: There’s a scene where the news team gets in a car accident, depicted in a slow motion sequence where someone is bitten by Baxter (the dog), fry grease pours onto someone’s face, someone is hit with a bowling ball, and someone is stung on the tongue by a scorpion. There’s also a scene where Ron tries to attack his female boss, and Ron later gets punched in his private area.

Other content includes a scene where Ron, in his depression, tries to hang himself.

Normally, towards the end of my review, I try to point out any good morals or spiritual lessons that can be seen in a movie. It bothers me that I can’t with Anchorman 2. There are no redeeming qualities. Will Ferrell is no doubt a good comedian and can be funny without being crass (I would have to say his character brought most of the disgusting humor). I would even say this sequel, without the added humor, had potential. However, the overly crude humor was too much for me to enjoy this sequel. I do not recommend this Anchorman 2 to anyone: children, teens, or adults. While the film tries to add a lesson about parental responsibility, it isn’t enough to outweigh the crude humor. I plead with you to avoid this movie. There are much better things to do with your time this holiday season.

Positive
Positive—I love Will Ferrell films; they make me laugh a lot. In recent years his films have started to go down hill—didn’t like the ones he put out in 2012. Last good one was the “The Other Guys.” Then 2013 hit. I had heard about “Anchorman 2” being made. I was so excited because the 1st one is my second favorite Ferrell movie. So I went and saw this one. Not as good as the first one, but still funny.

Some of the gags are the same as the first, but it still had new jokes, too. This movie however has some crude humor in it and also racist jokes, but not too horrible. But I hear stuff like that at work, so it doesn’t bother me. It had some language, but not to much, in my opinion. Language doesn’t bother me that much. I have seen so many films with a lot more in it. There are some sexual themes in the film—a woman’s shirt gets ripped and you see her bra—anther scene you see a woman’s underwear in the window. But not R rated material.

This film is not a kid film. Okay for about 12 and up, in my opinion. Very funny; loved every second of it.
My Ratings: Moral rating: Offensive / Moviemaking quality: 4

Richarf, age 21 (USA)
Negative
Negative—Waste of 2 hours of your life. Big disappointment. Save your money and give it to your church!
My Ratings: Moral rating: Offensive / Moviemaking quality: 2

Adam, age 39 (USA)
Comments from non-viewers
Negative—In my honest opinion, I feel like a movie can be just as funny without the vulgarity and the offensive jokes. I can handle some inappropriateness here and there, but racial jokes, and to top it all off, jokes about men’s/women’s anatomy? This is exactly why people in the general public have a trashy mouth, because of the type of dialog that’s used all too much in films nowadays. Do yourself a favor and skip this movie.