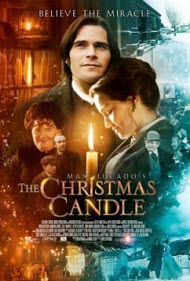 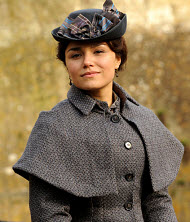 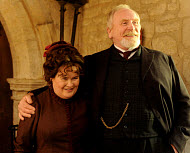 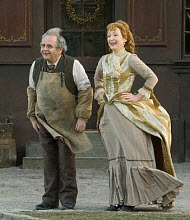 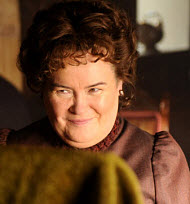 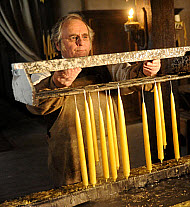 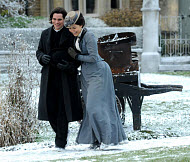 What is the TRUE meaning of Christmas? Answers for skeptics. Plus carols, width, coloring pages, reviews of Christmas movies, and more.

“In a world illuminated by modern marvels, who needs the light of a simple candle.” The Christmas Candle is a film based on the short story written by Max Lucado. Every 25 years for the past 200 years, an angel has visited the candle makers in the English village of Gladbury. The angel blesses one candle and the Haddigan’s, the village candle makers, chose one needy person to give the candle to. They instruct the person to light the candle and pray, and each time the needs of the individual are met. It is a Christmas tradition that gives the hard working villagers hope and faith.

After the death of the village minister, David Richmond (Hans Matheson) arrives to take on the position. When told of the tradition of the Christmas candle, and that this is the year the angel will visit, the minister expresses his doubt. The people expect the Advent sermons to relate to the candle, but the new minister refuses to speak on it. At one point, he takes all the prayer requests and preaches that if “Your neighbor needs a miracle, be that miracle,” and he seeks to answer the prayers on his own, while encouraging everyone to help their neighbor.

This seems a great idea, in that everyone comes together to bless each other, but, unfortunately, it comes from the Reverend’s lack of faith. He himself admits he does not believe in miracles. He is a Godly man, and he preaches good sermons, but they come from knowledge of what faith and belief are, not from a place where one believes it in their heart.

When the angel arrives at the home of Edward and Bea Haddington (Sylvester McCoy and Lesley Manvill), Mr. Haddington stumbles and knocks down all the candles. He and his wife do not know which candle has been blessed—which one is the Christmas Candle? So many friends have come to them in need, humbling themselves to ask if they might be the one to receive the candle that year and the answer to their prayers. To make matters worse, the Haddington’s son does not wish to return to Gladbury, and there is no one to carry on the tradition of candle making. The Haddington’s contemplate keeping the candle for themselves.

How can the Haddington’s help their neighbors when they don’t know which candle is blessed? How do they deal with their own desire to keep and burn the Christmas Candle to have their prayers answered? Will the Reverend continue to rely on his own strength or come to terms with his own hardships that have overshadowed his faith?

While the Reverend has good intentions when he calls his parishioners to service to help one another, he inadvertently seeks to diminish the faith everyone has in the candle, which is symbolic of faith in God. The Reverend reads John 1:1-5,

This has always been a passage that sounds confusing, speaking in riddles, metaphorically, yet as the Reverend beautifully reads it, it becomes clear and quite fitting for this movie. The candle symbolizes the light of men, who is Jesus. Other passages in Scripture also refer to God as the light.

I read the book before the film came out, so I knew the story and was pleased it was made into a film. The only possible objection one could have would be a child born out of wedlock. Given the context of the story, that child brings love and hope and is a small part of the movie. There is nothing inappropriate shown or mentioned in relation to that. During certain scenes, I had goose bumps on my arms and tears in my eyes. There is a tender moment when a man gave thanks to God for his cat. God is God of the simple things, and no prayer is too small. It is an endearing moment.

“The Christmas Candle” is a lovely film. The setting is quaint and realistic, and the acting is well done. There are a number of well-known actors in this film, and the singing talents of Susan Boyle in her acting debut. I think this film is a new Christmas classic, one to be viewed each year as a family. It is a wonderful period film, showing hope, faith and new beginnings. I thoroughly enjoyed it and highly recommend this film. “For only in Christ do we find the hope, joy and love we have come to know this Christmas season” —Reverend Richmond, The Christmas Candle.

Comments below:
Positive
Positive—“The Christmas Candle” is a very good movie to get one in the Christmas mood and spirit. It conjures up images of classics like “It’s a Wonderful Life,” “The Bishop’s Wife,” and “Come to the Stable.” The main plot is about a minister coming to terms with his disbelief in miracles and his struggle to modernize a country church that believes in a traditional town miracle, yet it has plenty of subplots and characters who interact with the main story line.

There were some editing problems and at times the story did seem a little stiff and Susan Boyle is a better singer than actress, but overall the production quality is much better than an average Christian film. Fans of Masterpiece Theater will enjoy seeing familiar faces. I would highly recommend this film to anyone.
My Ratings: Moral rating: Good / Moviemaking quality: 4

Charlie, age 26 (USA)
Positive— I went to see this movie with my family and everyone enjoyed it even my teenagers. It is great to see high quality movies with great moral standards like this. I hope to see more family movies like this at theaters. …there is absolutely nothing offensive in this movie…
My Ratings: Moral rating: Excellent! / Moviemaking quality: 5

Cat, age 39 (USA)
Positive—Excellent! Exceeded my expectations. What a privilege and a blessing to see the first showing of an instant classic. The first drop of water whose ripples will continue to expand. A mustard seed planted. How many people for over 150 years have read or watched A Christmas Carol out of tradition, without realizing they are seeing Scrooge born again by the true meaning of Christmas, a second chance, and the realization of where his fate lies if he remains unchanged?

Max Lucado’s The Christmas Candle could easily be mistaken for a Dickens” treasure. Touching and memorable characters brought to life by outstanding actors all. It beautifully weaves so much of the true meaning of Christmas, the words and intent of Jesus, Christ, the Messiah, especially John 13:15. May this movie annually inspire and uplift untold millions of people to the unchanging Christ for generations to come, until the Light of the World returns. Worth your support. Go see it!
My Ratings: Moral rating: Excellent! / Moviemaking quality: 5

Tori, age 40+ (USA)
Positive—“The Christmas Candle” is a well-done motion picture. No cursing, swearing, sex, violence or language, just great storytelling and an inspirational message of the hope found only in Christ Jesus our Lord. Contrary to a lot of reviews on the film, the style is not that of a made-for-television motion picture, but of the best films produced in Hollywood (and I mean those produced by Walt Disney Pictures and the motion pictures made in the 1930s, 1940s and 1950s). The story slowly unfolds and wraps you in its warmth that by the time the final scene fades, you don’t want to leave.

I applaud former Senator Rick Santorum for producing this motion picture, and assembling some of the finest actors around to make this motion picture a reality. Hans Matheson (the 2002 miniseries “Doctor Zhivago”), Samantha Barks (“Les Miserables”), James Cosmo (“Braveheart,” the BBC miniseries “Sir Walter Scott’s Ivanhoe,” “Troy”) and John Hannah (“The Mummy” trilogy) star, with singing sensation Susan Boyle making her acting debut, and a quick cameo by the author of the novel on which the film is based, Max Lucado.

The film does have some thematic elements (situations dealing with death), but nothing offensive. View this motion picture in cinemas before it disappears, or if you can’t find a cinema near you that is showing the film, wait for the DVD.
My Ratings: Moral rating: Excellent! / Moviemaking quality: 5

D, age 27 (USA)
Neutral
Neutral—The script had problems in the story line. It was kind of a Catholic/Lutheran movie. Susan Boyle made the sign of the cross in the movie, which is a Catholic thing. Do Lutherans do that, too? In the movie, the towns folk trust in a candle for the answering of a prayer. The new Pastor gives his first sermon, which was right on in theology; however the congregation did not like the new Pastor’s first sermon, and they let him know it with a cold unloving reception. Red flags went right up with me.

We later find out why the congregation didn’t like his sermon. This congregation wanted to put their trust in a candle. By saying a prayer with the special candle, their prayer would be answered. This is to me, and others, is pure idolatry. We don’t need a candle for our prayers to be answered, we need to just trust in God’s will in Jesus name.

I thought the movie was boring anyhow, and I was hoping to feel a good Christmas joy, and I didn’t get that. I’m glad to see a movie with no cussing. It was nice seeing Susan Boyle in a movie and sing a little. However, her acting is amateur.
My Ratings: Moral rating: Excellent! / Moviemaking quality: 3

Robert Garcia, age 66 (USA)
Neutral—I could have enjoyed this so much more if the background music had not been so loud it drowned out what the person was saying so much of the time… that made it hard to follow what was going on, when you couldn’t understand what the person said.
My Ratings: Moral rating: Good / Moviemaking quality: 2

Dora, age 70’s (USA)
Negative
Negative—I liked the film, overall, with the nice music and scripture reading in the movie, non violence and modest dress. However, as a Christian parent screening this before my child sees this, I was stunned that in this nice Christmas film spiritualism was present. In the scene where the angel appears in the house of the candlemakers shop, you seeing the candle shop’s wife’s tea cup floating up as she suddenly wakes up, and later, in another scene, she is looking at her cup reflecting back on that mystery. Therefore, seeing this film, I cannot give this a full positive rating based on that and must speak for truth.

In Deuteronomy 19:10-12, it states that we are not to associate with these kind of divination, observer of times, enchanter, witch, charmer, consulter of familiar spirits, wizard, or necromancer. Why then would a Christian film put in one of these things that associates with spiritualism of levitating objects. If part error is mixed with truth, then the whole thing is error.
My Ratings: Moral rating: Average / Moviemaking quality: 4