for pervasive language, strong crude content and some violence. 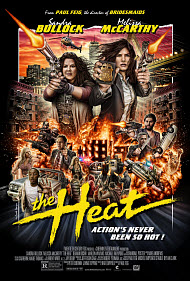 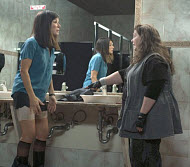 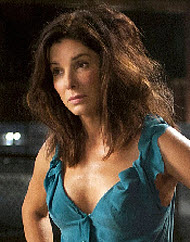 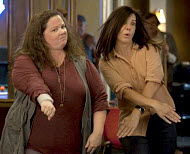 “Lethal Weapon on estrogen,” is a bit simplistic, but in many ways it does get to the heart of “The Heat,” the new buddy-cop flick where the dudes are dames.

“The Heat” pairs up FBI special agent Sarah Ashburn (Bullock) and Sharon Mullins (McCarthy). Ashburn is the prototypical “by the book”, “close to the vest”, “uptight” agent who becomes partnered with the “rogue”, “foul-mouthed”, “throw-the-book at the perp” Mullins (McCarthy). When they cross paths over a common case, it is suggested that they work together, a partnership that neither officer is all that enthusiastic about.

The two are on the trail of a high-end drug lord who is wreaking havoc over the streets of Boston. As they climb further up the drug lord’s chain of command it becomes apparent that by working together and utilizing each other’s strengths they have a better chance at catching the “bad guys.”

Yes, I could fill the page with the countless examples of “buddy movies” and “buddy-cop” films that have used this tried and true plot formula and still leave a few off for another page. However, it isn’t for an intrinsic plot and thought provoking character studies that most audience go to see this particular sub-genre of action movies.

The film follows in the same path of the Lethal Weapon and Beverly Hills Cop franchises. The main distinction between this addition to the genre and those two seminal works is the two cops are played by Bullock and McCarthy, their pairing is the strongest aspect of what would be a very mediocre movie without their inclusion.

The verbal repartee between Bullock and McCarthy is very fresh and can contend with the best in the genre. McCarthy is very good in her role as the unorthodox Boston police officer and Bullock is very comfortable in the shoes of a straight-edge FBI agent. The scenes between the two of them are where the movie succeeds while the scenes surrounding their on-going bickering and banter are pretty much standard genre fare.

Anyone considering taking the family out to a family matinée at the local theater should be advised of the mature content of the film. It is rated “R” for pervasive language, strong crude content and a few violent scenes. The objectionable material is another way in which this film does not deviate far from its predecessors. If you look at “Lethal Weapon” (a movie that many consider the “gold standard” to this genre) as a guide then you do get a taste of what you’re in for.

Starting with the least objectionable first (in terms of quantity). There is the usual amount of explosive, gun-fire violence associated with these types of films. However, there are a couple scenes that audiences should be aware of. In one scene a character is shot in the head and we see brain splatter from the gunshot. A second, and probably the most in terms of violent content, involves a member of the criminal team and and his inclination towards using knives as torture instruments. The scene is some-what graphic, and there are multiple knife punctures.

The material that viewers will find most objectionable is the persistent profanity throughout the film, particularly (and some might argue, at least for the first hour and a half of the film, solely) when McCarthy is on screen. To say that the film is “profanity-laced” is to say “Scarface” (the Pacino version) has a few minor scenes of violence. McCarthy’s Mullins spits profanity as if she is being paid by the syllable. The f-bomb count is about 158 utterances, I would submit she used up about ½ of those in her first scene. There is also the usual scattering of other profane or semi-profane words. The “g-d” term is another favorite of Mullins that she usually interjects when she has to pepper up a rant a little or gets bored with the multiple f-bombs she has used in the preceding sentence. In addition there are a handful of anatomical and scatological references.

Bullock and McCarthy are both very talented and their verbal jousting takes the film to a level above most others of this genre. There are moments in “The Heat” that are legitimately funny. However, if you are thinking this is just another comedic, energetic buddy-cop film with “chicks” consider the predecessors of which it emulates. Both Lethal Weapon and Beverly Hills Cop earned R ratings for similar material that garnered The Heat its R.

Positive
Positive—“The Heat” is a great comedy! Yes, there is foul language, but these are just words to express one’s self… It’s up to you whether you let these “words” offend. Do not bring your kids to see this one; it is rated R of course. Nonetheless, a really laugh out loud comedy!
My Ratings: Moral rating: Offensive / Moviemaking quality: 5

Andrew, age 30 (United Kingdom)
Neutral
Neutral—We pretty much knew that there would be a big dose of language, and there certainly is. I saw no overt nudity, but there are some suggestive scenes. There is no reason to see this on the big screen, so if you feel you have to expose yourself to all the profanity (the film certainly is funny) wait for the DVD. The film may be worth your time if you do not choose to be easily offended, however, it’s not worth the money you’ll pay to see the big screen.
My Ratings: Moral rating: Extremely Offensive / Moviemaking quality: 3

Randy, age 65 (USA)
Negative—“The Heat” is a movie that is raunchy, disgusting, foul-mouthed, but those two comedic actresses are definitely funny. They play off each other very well, and I don’t know how she does it, but at the end, Melissa McCarthy’s character brought me to tears. I laughed, but I don’t recommend this movie. The crassness outweighed the humor.
My Ratings: Moral rating: Very Offensive / Moviemaking quality: 3½

Halyna Barannik, age 67 (USA)
Negative—Just plain awful. Cursing every few seconds it seems like. Some funny parts with physical humor but this isn’t a movie I would expect from Sandra Bullock. I like her a lot, but not in this movie. I don’t expect much of McCarthy, so I wasn’t disappointed with her. The only Biblical value I saw was that it supports a view of sinful humanity. Certainly not worth wasting your money on.
My Ratings: Moral rating: Extremely Offensive / Moviemaking quality: 2

Joe, age 65 (USA)
Negative—Just plain awful. Cursing every few seconds, it seems like. Some funny parts with physical humor, but this isn’t a movie I would expect from Sandra Bullock. I like her a lot, but not in this movie. I don’t expect much of McCarthy, so I wasn’t disappointed with her. The only Biblical value I saw was that it supports a view of sinful humanity. Certainly not worth wasting your money on.
My Ratings: Moral rating: Extremely Offensive / Moviemaking quality: 2

Joe, age 65 (USA)
Negative—The trailer is deceitful; movie is just a prolonged trailer, with no additional humor but with huge amount of Fs. It gets very boring really fast (I almost fell asleep). Stand up comedy with obscene content is better then this movie. And for Sandra “… how low can you go”?
My Ratings: Moral rating: Very Offensive / Moviemaking quality: 4

Vladislav, age 36 (USA)
Comments from non-viewers
Negative—I have not seen this movie yet, but to add to the comment above, “Bridesmaids” was also very crass… so much so that it took away from the humor, as well. This is why I am thinking twice before agreeing to go see this movie.

Deborah, age 50 (USA)
Negative—The movie started at 3:00pm and by 3:13pm, we were out of there. Should have never gone to see it in the first place. Every sentence had at least 2 or 3 curse words. We heard the f-bomb and God’s name in vain way too many times. We say do not go see this movie. We should have checked other Christian reviews before buying a ticket. We only went off of the movie trailers which were completely deceiving. At the points in the first few minutes where the scenes from the trailers were played, the language was horrible.

In our opinion, the storyline could have made for a great movie. We were excited to see Sandra Bullock and Melissa McCarthy together. Just disappointed in the language.

Paul Asay, Plugged In
…Funny but Endlessly Profane… Laughs are consistent and abundant in this all-female take on the cop buddy genre. So are the f-bombs and misuses of God’s name. …

Ted Baehr, Movieguide
…more often than not “The Heat” is just stupid-funny, which circles us back to McCarthy, motor-mouthing four-letter fury like an operatic aria. … [3 out of 5]

Kimberley Jones, The Austin Chronicle
…the comic tension dissipates, and the film's boilerplate drug-dealer plot takes over and goes on and on. … [B]