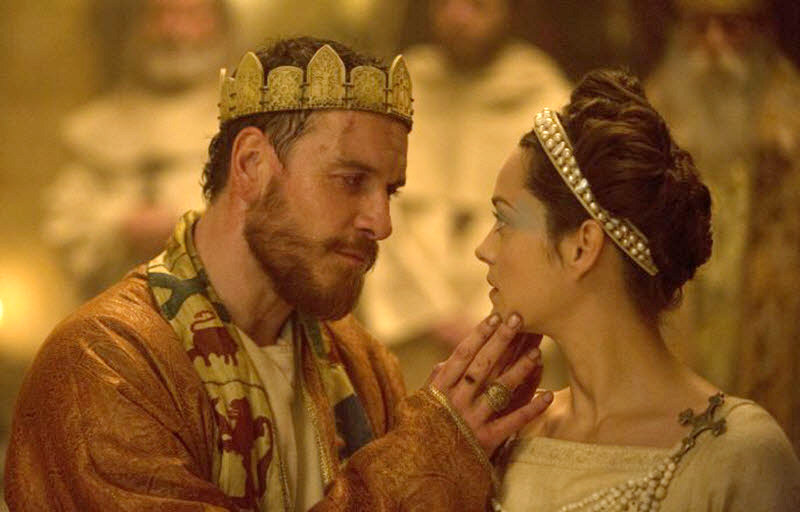 for strong violence and brief sexuality. 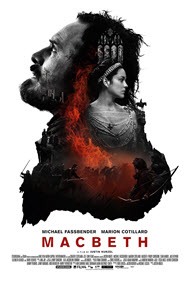 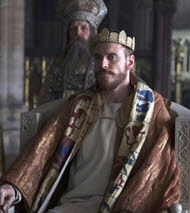 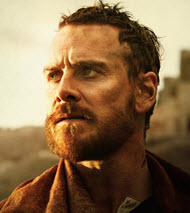 About kings of the Bible

About thrones in the Bible

About crowns in the Bible

What does the Bible say about murder?

What does the Bible say about prophecy?

What does the Bible say about witches and witchcraft? 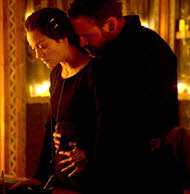 What does the Bible say about marriage? And the husband and wife relationship?

Death of a child 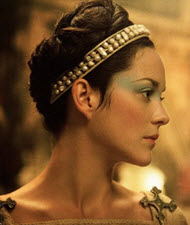 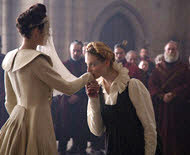 Macbeth 2015, takes on a British-French-American spin of the Shakespeare tragedy

The film opens with a funeral for the child of Macbeth (Michael Fassbender) and Lady Macbeth (Marion Cotillard). We then see Macbeth engage in a bloody battle, where he claims victory for King Duncan. He is soon visited by 3 women (witches), who claim Macbeth as the future King before they vanish. Filled with lust for power, Macbeth and Lady Macbeth plan to overthrow the King through murder, conspiracy and betrayal.

Michael Fassbender and Marion Cotillard are phenomenal. Their performances will keep you transfixed. They become Mac and Lady Macbeth on screen, truly well done. The story is a classic and, for a reason, changing the timeline was done with consideration of the source material. The supporting cast is great and fulfill the story well.

Now on to the objectionable content, there is plenty. There is extreme violence and blood and gore. There is several serious references to the occult/paganism and strong humanistic undertones. Catholicism is in the background, and is referenced many times. Shakespearen dialog has sexual undertones and other adult themes that may be missed by the general population. Suicide is shown.

There many references to religious themes, and the film shows guilt and conviction of sins. It shows that when a man follows his own way and does what is right in His eyes it will lead to destruction. However, it does not explain what that actually means—true repentance and turning from sin—trusting God who sent His Son as for all the sins of the world.

As for a recommendation, it’s a no go. It truly is consistent with the source material, and the acting is ideal, but the offensive and objectionable content won.

Positive
Positive—…Macbeth is easily the greatest film of the year and does justice to Shakespeare’s great tragedy. The film brilliantly portrays the tale of a man who is corrupted by his own ambition and ultimately comes to his demise by his own tragic flaw. A brilliant depiction of the play, with impeccable acting, beautiful cinematography, and a haunting soundtrack. For Christian audiences, the film will remind them of the words of Isaiah, “There is no peace, saith my God, to the wicked” (57:21).

Here we see a man who, motivated by ambition, commits murder to gain the throne, but then ultimately must commit more and more atrocities to cover up his initial sin. As Macbeth laments, “I am in blood/Stepp’d in so far that, should I wade no more/Returning were as tedious as go o’er” (3.4.136-138).

The MPA’s value judgment suggesting it must be restricted to audiences 17 and older is very unfair, especially to children interested in exploring Shakespeare. The violence in the film is only in keeping with the violence of Shakespeare’s original play, and it is depicted in a very discreet manner and is by no means gratuitous.

For example, the scene when Macbeth kills King Duncan could have been much more violent, but instead was presented more along the lines of the Psycho shower scene, showing the knife and the terrified facial expressions, but doesn’t actually show the graphic details of the murder. It was very well done and the “R” rating is obviously an extremely severe overreaction. The film ought to be “PG-13” at the very worst. Not only should it be available for all audiences interested in exploring Shakespeare, teenagers ought to be encouraged to see this extraordinary adaption of the Immortal Bard’s great tragedy.

Director Justin Kurzel presents a very potent and raw depiction of Shakespeare’s Scottish Play, which brings the story to fiery life. As the credits scroll, the film will leave the audience harrowed by Shakespeare’s unparalleled exploration of the mankind’s disposition in the universe. Despite all of Macbeth’s mortal efforts to fight against the decrees of Fate, his life truly does prove to be, “but a walking shadow a poor player/That struts and frets his hour upon the stage/And then is heard no more.

Nathan, age 20 (USA)
Movie Critics
…the acting soars and the violence blazes… Kurzel's bold and viscerally thrilling approach along with a brutal, battle-heavy story line should ensure that even less initiated viewers will find themselves immersed in this classic medieval tragedy, a kind of “Macbeth” for the “Game of Thrones” crowd. …

Gary Goldstein, Los Angeles Times
…Marion Cotillard and Michael Fassbender excel in Justin Kurzel's thrillingly savage interpretation of the Scottish Play. …Fearsomely visceral and impeccably performed, it’s a brisk, bracing update, even as it remains exquisitely in period. Though the Bard’s words are handled with care by an ideal ensemble… albeit one surely too savage for the classroom. …

Guy Lodge, Variety
…awash in gorgeous carnage… Mr. Fassbender gives you a reason to see this “Macbeth,” although the writing isn’t bad, either.

Manohla Dargis, The New York Times
…Fassbender was born for this… this endlessly studied 400-year-old piece of drama regains its power to mesmerise and shock. … [5/5]

Robbie Collin, The Telegraph
…Michael Fassbender and Marion Cotillard shine in a dark, dank ‘Macbeth’… It must be admitted that Shakespeare wrote long, and Kurzel unsentimentally boils the script down to the greatest hits. The story becomes at times mere backdrop to arresting, even brilliant photography… [3/4]