for mild rude humor and some action/peril. 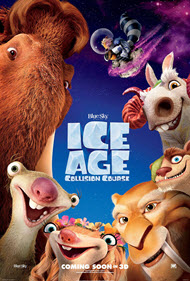 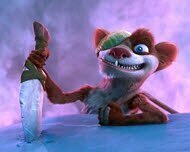 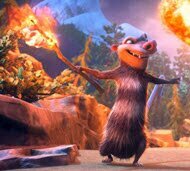 value of family and marriage

ice and snow in the Bible

Information about Noah’s Ark and the biblical flood

INCREDIBLE SLOTH—What can a sloth teach me about life? Answer

The “Ice Age” saga continues with yet another global crisis caused by Scrat the Squirrel’s attempt to capture the elusive acorn. This time, Scrat accidentally sends a frozen spaceship into space. The ship collides with a huge asteroid and sends it hurdling toward Earth.

When Buck the Wiesel discovers an ancient prophecy that foretells the extinction of mammals because of an asteroid, Manny and the herd must attempt to divert the asteroid’s path by moving a magnetic rock to divert the asteroid away. Will they succeed, or will it be the end of the Ice Age?

Like all “Ice Age” movies, there is a lot of potty humor. Posteriors are referred to as “butts” and are shown and mentioned several times. There is a bowel movement that is almost eaten. Characters playfully insult each other; one character tells another that he does a lot of “sucking” at hockey. A father tells his son that he is basically “useless.” There is a lot of slapstick violence, and one character tries to kill another. There is some sexual content, as well. Characters are hit in the groin, male characters cross-dress as females in suggestive ways, and males have items placed over their nipples. One character gives another a bikini. A character is seen showering behind a curtain and rubbing himself with a towel in suggestive ways. Characters are in a hot tub together.

The main issues with this movie are spiritual; however, parents can use these issues to teach their children biblical truth. At the beginning of film, it is suggested that Scrat accidentally created the Solar System. However, it is shown in such a ridiculous way that even a child would know Creation didn’t happen that way. Nevertheless, this is a great opportunity to remind kids that “In the beginning God created the heavens and the earth” (Genesis 1:1). One character thinks she has died and refers to winged animals as “angels” and a “demon angel.” Another character repeatedly mentions the Universe in a way similar to Hindu Brahman; she says “maybe the Universe is telling us something,” and “the Universe smiled on us.” When things are going well, one character says “Somebody up there likes us,” and when events take a turn for the worse, says, “Somebody up there doesn’t like us.” This could be a lesson that contrary to popular belief, our circumstances do not generally reflect God’s feeling for us (Lamentations 3:22).

Another character supposedly “sees all and knows all,” but the audience learns later that this character is an Eastern spirituality guru, of sorts, who is completely selfish and oblivious to the danger around him. This can be a lesson that there are many people in this world who are following a false god and are oblivious to the reality of eternal hell, and it is our duty to lovingly tell them the Truth of the gospel (Matthew 28:16-20). There are crystals that give eternal youth; parents can use these crystals to tell kids about the eternal life that is offered through Jesus’ sinless life, substitutionary death and resurrection. Finally, the characters try to stop a prophecy, and parents can use this to tell children that God’s prophecies cannot be stopped, no matter what people try to do; they can trust what is written in God’s word (2 Timothy 3:16).

As in all “Ice Age” movies, this movie sends a message of working together and the value of friendship and family.

While “Ice Age:Collision Course” is rife with offensive material, it also presents parents with an opportunity to tell children about God. If you are offended easily, I would recommend passing this one up. However, if you figure the “Ice Age” saga has too many redeeming values to ignore, you can use the offensive material to show the difference between the world’s wisdom and God’s Truth and teach some points about the character of God.

Negative
Negative—…This is not a family-friendly movie for young kids, and although I own all the other movies in this series, I was extremely disappointed in this sequel. Some of the language, subjects, and suggestive themes were unexpected and inappropriate for including in an “Ice Age” movie. …when I saw the movie, there were mostly kids under 12, and their parents. It seemed like everyone in the audience could not wait for the movie to finish. Disjointed and choppy. Sad end to a fun family franchise.
My Ratings: Moral rating: Offensive / Moviemaking quality: 3½

LL Souder, age 57 (USA)
Negative—I think the fact that, at the end, the female girlfriend of the stinky sloth ends up with her head in his crotch, suggesting we all know what, while he is splayed on his back feet up, was the most infuriating part of this sick, little movie. I wondered what kind of people were the writers and animators to create these scenes for children. Very upset and wanted my money back.
My Ratings: Moral rating: Very Offensive / Moviemaking quality: 4½

Aletha, age 39 (USA)
Movie Critics
…an infectious chatterbox comedy… It may be a slight entertainment in the grand scheme of things, but it’s been made with a busy, nattering joy. …

Glenn Kenny, The New York Times
…what mostly redeems this film from the being just another animated movie with too many butt jokes, is its positive emphasis on family… [4/5]

Adam R. Holz, Plugged In
…It’s a shame the “Ice Age” writers don’t try to even out their storytelling efforts throughout the entire film. It might make a prehistoric franchise like “Ice Age” interesting for adults once again.

Tina Hassannia, National Post [Canada]
…“Collision Course” is simply a perfunctory, watered-down entry in the series that feels like it should have been released on home video. …

Katie Walsh, Tribune News Service
…falls far short of its earlier promise. Once smart and funny but now witless and given to an overabundance of poop gags… [1½/5]

Marc Savlov, The Austin Chronicle
…Lazy, scattershot and excruciatingly unfunny, the movie is a hazard to the very young, who might come away with the erroneous impression that movies don’t get any better than this. …

Stephanie Merry The Washington Post
…As ever, the wordless, nervy Scrat is the funniest thing in the film – but his slapstick scenes make up only a fraction of the whole. And the rest is dull and rather wearisome. …

Helen O'Hara, Empire [UK]
…too many slapstick gags and wacky animals… adults should root for the annihilation of this tapped-out series… [1/4]

Brad Wheeler, The Globe and Mail