for thematic elements and some violence/peril. 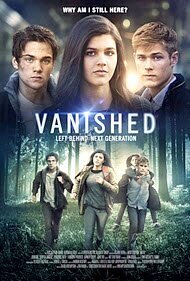 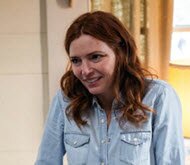 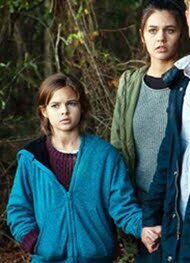 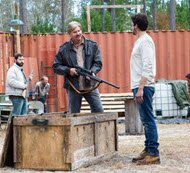 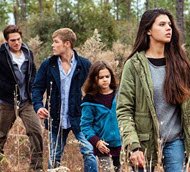 Rapture—coming of Jesus Christ in the air to take up His bride the Church, 7 years prior to His Second Coming to Earth in Jerusalem to defeat the Anti-Christ, The Beast and Satan, beginning the Millennium

Teenager Gabby (Amber Montana) is talking with her mom when disaster strikes—people vanish right from where they stand, cars crash, mothers scream for their babies. Gabby is left alone, wondering what happened, gripped by fear. After seeing her mother’s empty clothes lying on the ground, she runs to find her 11 year old sister, instead finding her friend Josh (Mason Day). They eventually find Claire and meet Flynn, who joins them as they travel to find Gabby’s dad, safety and hopefully, answers as to what happened. Luke 17:34-35 says “I tell you, on that night two people will be in one bed; one will be taken and the other left. Two women will be grinding grain together, one will be taken and the other left.” This warning was given in Scripture, but to the non believer, there will only be confusion.

Along the way they meet Damon (Tom Everett Scott), a doomsday prepper living off the grid. He grows his own crops, raises chickens, has solar power and is ready to welcome anyone in, as long as they help pull their own weight. Something about this guy doesn’t sit right with the kids, and they come to find out that this place of sanctuary, isn’t so safe. Can they get free? Will they find answers as to what happened and will they find Gabby’s dad?

I had been following the release of this movie for some time, and the release date had been pushed back, then it became a one night only event in limited theaters. I read the Left Behind series, I saw the Kirk Cameron version of the movies years ago, I saw the newer one with Nicolas Cage, and I have read some of the Left Behind kids series books with my own children. I was excited for this movie to come and for my kids to see a movie they could relate to. Even though it was a one night, limited release showing, I gathered my kids, and we made the trek to the closest theater showing it. We all had high hopes. Unfortunately, the movie didn’t meet my expectations. It is a good teen movie… It just isn’t a good Rapture movie. If I am going to see a Christian movie, I expect it to have a bit of substance to it spiritually.

In this film, the kids do get to a church, but for such a brief time that the explanation given for the disappearances is that the believers left. Very little information or explanation is given throughout the film. There is no discussion of Jesus, who He is, what He did for us and why He came back. I know the desire to appeal to a teen/young adult audience was there, and the storyline is fast paced and intense, but the whole story of Damon left one wondering what this had to do with Christ or the Rapture. That’s why I say it wasn’t a good Rapture film. They also employs a romantic interest between Gabby and Josh and Flynn, with Gabby unsure where her affections truly lay.

The violence is intense, showing a dead police officer on the ground, a man gets shot (with blood on his shirt), a character with a nasty gash on her leg requiring stitches, locking people up against their will, guns and the threat of death. Heed the PG-13 warning. I did not, and my daughter was crying from both the intensity and the fear of not seeing her friends in Heaven. It is a heavy movie for young ones.

There is no bad language or sexuality. The violence is higher than I expected, and the hope of Jesus is weak in the film. I suspect they left it open so they could continue the storyline with another film, which I hope they do. But I also hope they delve heavier into Scripture and Jesus and His saving grace.

According to social media, many who did see this film enjoyed it, so I encourage others to see it when it comes out on DVD—teens and adults may enjoy it if you watch it not expecting much spiritually, but want a film that merely touches on Christianity and is free of foul language and full of non-stop action. Let us, however, heed the warning given to us in Scripture and…

“Keep awake therefore, for you do not know on what day your Lord is coming. But understand this, if the owner of the house had known what part of the night the thief was coming, he would have stayed awake and would not have let his house be broken into. Therefore you must also be ready for the Son of Man is coming at an unexpected hour.” (Matthew 24:42-44)

Positive
Positive—I went in to this movie not knowing what to expect. I was pleasantly surprised to find an exciting Rapture movie. It’s a shame there were only about 15 people in the entire theater. This was not your typical 666 can’t buy or sell Rapture movie. Compared to the Nicholas Cage “Left Behind” movie, IMHO, this one was much better. Even without the big name. This was more of an adventure of some teens just after the Rapture.

I was glad to see that the Rapture happened at the beginning of the movie, so we didn’t have to endure some long boring story line leading up to people disappearing. The excitement started right away, and the movie was not slow or boring, at all. I highly recommend this movie for the 10 and up crowd. Don’t worry about the PG-13 rating. There was one kiss in the movie, one person was shot and killed, and another died by falling. I don’t remember hearing any profanity whatsoever. Just like a Christian movie should be.

There were two things I didn’t like about the movie though. The first one was that it ended so abruptly. We got to the closing credits and everyone wuz like “that’s it? It’s over already?” Hopefully there will be a “Vanished 2” coming out really soon. The other thing I didn’t like was that it didn’t go into enough depth for me about the end times. But I guess that would have turned it into a boring 3 hour movie. Plus it left us wanting more. So I guess that was a good thing.
My Ratings: Moral rating: Good / Moviemaking quality: 4½

Frank, age 47 (USA)
Positive—The movie was well made. Unlike the previous “Left Behind” movies, this one was not drawn out or lacking with the script! The acting was top notch from a largely unknown cast. The Rapture did happen at the beginning, which really helped the pace of the movie. I hope the next movie continues to improve, as far as the script and story line. This was an admirable effort! There wasn’t anything offensive about the movie. There might have been a little more sharing of the Gospel without being too “preachy.” But, overall, a good effort!
My Ratings: Moral rating: Better than Average / Moviemaking quality: 4½

Wayne Chavez, age 61 (USA)
Comments from young people
Negative—It wasn’t really about God and the Rapture. It was more about the girl; it had lots of violence. It was more about her and choosing what boy to love, not about the Rapture. It was not realistic, because you don’t leave an 11 year old girl out in the woods. The guy who was running the sanctuary was a bit too crazy for my liking.
My Ratings: Moral rating: Better than Average / Moviemaking quality: 3

Kenze, age 11 (USA)
Neutral—It was scary. I didn’t like it because there were guns. God will help you and love you; God was helping them get through it, even though they weren’t believers.
My Ratings: Moral rating: Average / Moviemaking quality: 3

Molly, age 9 (USA)
Positive—I liked this film because it had good acting, good character, and also it was a very very very good reboot of the the others. The only thing I didn’t like about it was it was short and left people on a cliff hanger, which, I guess, is good for the audience, but I just wish it could have been a little bit longer. Other than that, it was a very good movie, to me.
My Ratings: Moral rating: Good / Moviemaking quality: 4½