for sci-fi action, some language and suggestive material. 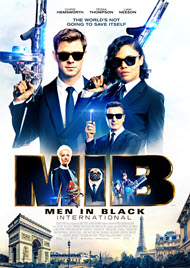 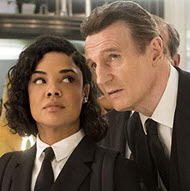 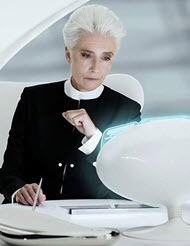 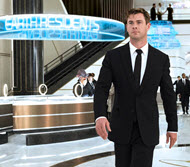 Other main themes of this movie… 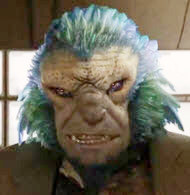 Ironies of these themes…

…when incomparing them to reality—viewed from a scientific, Bible-believing Christian point of view 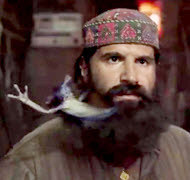 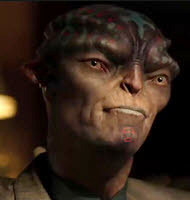 A reality that is not acknowledged in the movie is the existence of an all-powerful Creator from outside our universe.

Nor does it acknowledge the created non-physical, but powerful beings that interact with our planet on a daily basis—spirit beings (angels—the majority of which are good and holy—and others extremely evil).

Behind the scenes, the most powerful and evil of these unholy beings rules Earth and manipulates human beings—The Great Deceiver.

What are DEVILS and DEMONS?

Wrong beliefs about extraterrestrials from other planets 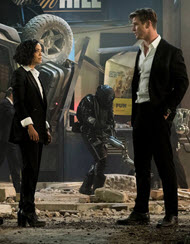 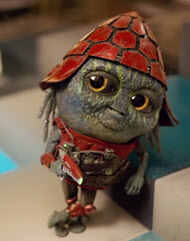 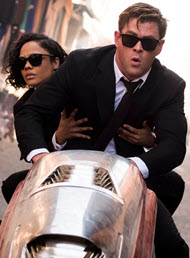 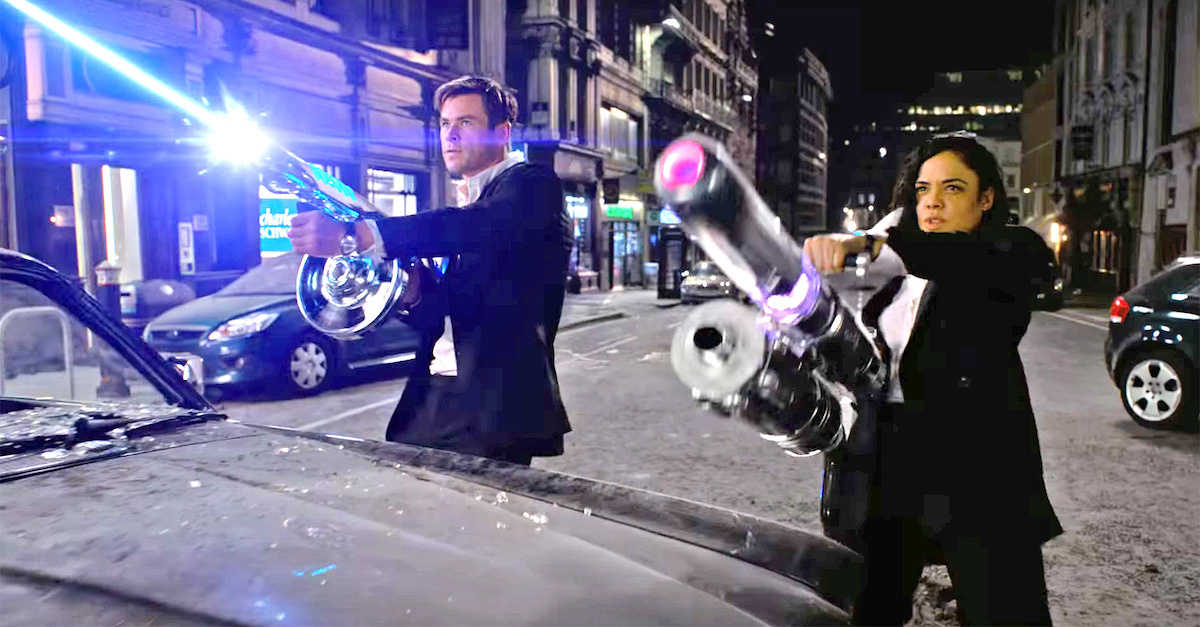 In 1997, movie-goers were introduced to the world of the Men In Black—a secret organization that oversees and protects Earth’s contact with extraterrestrials. Admittedly, I was never a huge fan, and my recollection of the original film was a quirky sci-fi movie with periodic scares and gross-out moments geared to young adults. So 22 years later, as I sat down to watch the fourth installment of the franchise “Men in Black: International,” I expected a similar experience. About 10 minutes into the film, I was already irked by the silly action, cartoonish CGI, and irreverent dialog. Then it dawned upon me—in the wake of Marvel’s success, this movie franchise has shifted its demographic towards teens. Once I began to watch “MIB: International” through those glasses, I found myself somewhat enjoying the nonsensical, benign adventure.

When Molly (Tessa Thompson) was a child, she had an extraterrestrial encounter and learned of the existence of the Men in Black. After 20 years of searching, she tracks down the secret organization and becomes their newest recruit, dubbed Agent M.

Despite being thrust into this new reality where aliens and humans coexist, Agent M’s persistence earns her an assignment with Men in Black’s top agent—Agent H (Chris Hemsworth). He is a confident veteran that makes her rookie insecurities unmistakable. When the two tackle their first and seemingly simple assignment, their mission unravels and the agents find themselves in a much more dangerous situation. There may be a mole within MIB, threatening the planet. They can trust no one… not even each other.

As they seek the truth, they interact with unique aliens across exotic locations while they try to save the world from an unknown enemy.

Even though this movie is filled with countless plot holes, vanilla action sequences, and absurd one-line quips during life or death circumstances, the near-two-hour runtime flies by. I give credit to the completely charming leads. Tessa Thompson (“Creed,” “Thor: Ragnarok,” “Annihilation”) is infinitely appealing. She seamlessly blends youthful excitement and self-doubt with confidence as Agent M. Meanwhile, Chris Hemsworth (“Thor,” “The Avengers,” “The Cabin in the Woods”) uses his well-documented charm and good-looks, but there is something threatening beneath the narcissistic Agent H.

Perhaps the most fascinating aspect of the movie is the threat of two characters coined the Alien Twins (Laurent and Larry Bourgeois). These two imposing figures silently stalk our protagonists throughout the film. At times, they look human… at other times, their eyes glow blue, or they combust into fiery, ghostly figures with no vulnerabilities. In a movie that feels completely unthreatening, these two characters add a small bit of tension.

Again, once I viewed “Men in Black: International” as a young people’s movie, I found it mildly entertaining.

There is definitely some objectionable material. There are multiple uses of vulgar and profane language (see below). A character describes another character as “pimping her out,” and says she “…will not fornicate with an alien.” The most objectionable and unnecessary moment comes as a joke. A character is seen shirtless in bed with an alien… implying he had interspecies sex. It’s an unfortunate scene that adds nothing to the story.

At its core, this movie has a positive and interesting message—Honesty and Truth. Because of the secrecy inherent within the MIB organization, the agents must be excellent liars… and they are. Agent H consistently deceives people because, to him, the end justifies the means. Agent M has lied her way to a prestigious position, and when trust is broken, she must be deceitful to protect herself and others.

However, as the plot unravels and the truth becomes clear, the characters realize honesty is the best method to discover the threat, save the world, and redeem themselves. This is a strong message, but unfortunately the execution is weak. Honesty and Truth could have been a powerful theme, addressed to every member of the audience, and this is a valuable lesson to learn… especially for young people.

“Truthful lips endure forever, but a lying tongue is but for a moment.” —Proverbs 12:19

“Men in Black: International” is silly, unbelievable, and very predictable… and yet, it’s kinda fun. Along with the entertaining performances from the two leads, there are enjoyable supporting characters portrayed by Kumail Nanjiani, Rebecca Ferguson, Emma Thompson, and Liam Neeson. I have to admit that I left the theater smiling. Although it otherwise feels aimed at young minds, this movie does have offensive adult content. The MPAA rates it as PG-13 due to language, suggestive material and sci-fi action and violence.

Positive
Positive—I completely agree with the Spotlight reviewer. Good characters and acting by all the main stars make an otherwise average film above average. Add the threat of the seemingly indestructible alien twins with some nice CGI effects is eye candy for this viewer. The film never takes itself seriously and neither should we. The language was a bit offensive but nothing like the original MIB which was riddled with profanity.

***SPOILER*** I loved the loyalty reference by the monster when the lead’s lives were at stake. And as a Marvel fan, I almost laughed out loud when Helmsworth picked up the hammer. ***END SPOILER***

It is light entertainment and a worthy rental for a couple of hours of escape that will leave you smiling.
My Ratings: Moral rating: Average / Moviemaking quality: 3½